Tom Service hits one out of the park this week with his choice of Mozart's Symphony No. 29 in his weekly symphony guide. Go read his essay, which is an excellent introduction. All of us who discovered classical music at some mature age recall the exact piece that turned us on. In Tom's case it was this symphony; in mine it was the Tchaikovsky Violin Concerto. Tom writes an excellent introduction to the piece and describes the opening as follows:


The first movement opens with the opposite of the grand rhetorical flourish that the vast majority of contemporary symphonies (including Mozart’s own) start with. The first thing you hear is a soft, descending octave in the first violins, the simplest of musical ideas, and a stepwise progression up the first four steps of the A major scale – along with a little chromatic agitation - over some serenely, almost ecclesiastically sonorous polyphony in the lower strings. This theme is then repeated, loudly, and with the addition of a canon: two beats later, the violas and cellos have the same theme as the violins, but at the third and fifth of the chord rather than the tonic - which means there’s a greater harmonic and contrapuntal richness than when we first heard the melody. In the space of 30 seconds or so, Mozart has used an enormous arsenal of sophisticated compositional techniques to create a miniature symphonic drama.

Pretty good description, but wouldn't it be even better if we could look at the score? Here is the first page: 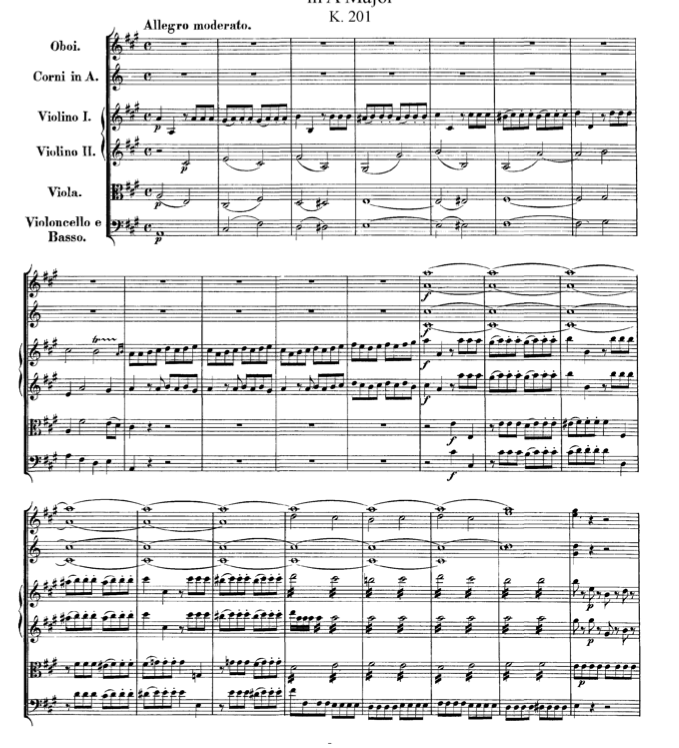 This is a great theme, one of Mozart's best ideas. It is constructed from a couple of little ideas: first of all that octave leap:

Which keeps coming back, a tone higher each time. Leaping down an octave like this has the feel of a syncopation because the note you land on is on the off-beat. Next element is the appoggiatura from below, also repeated each time a tone higher:

This two-measure idea of the octave leap, followed by the appoggiatura figure, is heard four times on A, B, C# and D, whereupon it cadences on A. Then there is a four-measure transitional passage using turns that takes us back to the beginning of the theme. What is so very interesting about this, apart from its immediate appeal, is that it is structured quite unusually. It most closely resembles a sentence-type phrase, but instead of the basic idea repeated once followed by a couple of measures of continuation and a couple of cadential, the basic idea is repeated four times, then we have the cadence, then there is four measures of continuation. The result is that the theme is very dynamic and a bit unstable. Then, in the next section, Mozart ups the ante with a wonderful idea: let's hear this theme in close canon: 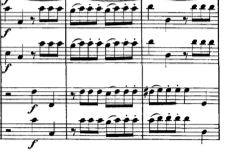 The first and second violins restate the theme in unison, an octave higher than the first phrase. Then, a half-note later, the violas and cellos have the same theme, in octaves, but on the third, C#. It is as if after a single 12-measure phrase, Mozart moves immediately into a development. But soon we do hear a second theme, in the dominant of E major:

The repeated notes in this theme tie it closely to the first theme. We get a little group of themes in E major and that ends the exposition, which repeats. The development moves to D major and we get some sequences and scale passages that don't seem too closely related to any of the themes we have heard so far. I think this is to distract us a bit because quite soon that terrific opening theme comes back again, like a long-lost cousin. Then we get our second theme, now in A major, so we know that we are in the recapitulation, which proceeds as it should. But what about that terrific theme? Surely we are not done with it? No, because now Mozart gives us a coda with an even more energetic version of the theme and brings the movement to an end. That's it: seven minutes of brilliant symphonic writing by the 18-year-old Mozart. Let's have a listen to the whole symphony:

Posted by Bryan Townsend at 7:56 AM