First of all, let me apologize for being absent from posting for four days. I was sick with a cold and at the same time, overwhelmed with work. But now I'm back!

I haven't put up a "Masterpieces of Music" post for a long time, but for this it seemed appropriate. In a lot of ways Haydn, Mozart and Beethoven, the three "greats" of the Classical Period in music (about 1770 to 1827), complement one another. They all wrote wonderful piano sonatas, for example, but there is no question that those of Beethoven are by far the most important. They also all wrote string quartets and, again, those of Beethoven are very important, but the sixty-eight by Haydn are likely equally important as they not only defined the genre, but they explored many things that no-one else did. They all wrote symphonies as well and in this area it is tempting to say that Haydn's 104 (or 106) are the equal of Beethoven's 9. Again, the sheer variety and quantity have to be taken into account even though the ones by Beethoven are pinnacles of the form. Where does Mozart fall into this picture? Where Haydn was mostly responsible for creating Classical style and defining the possibilities and Beethoven enlarged and deepened these possibilities, Mozart managed to find his own path that was quite different from either.

Mozart's life was unique, so much so that many biographers have been so impressed by it that they have not managed to tear themselves away to look at the music in itself. Mozart was likely the greatest child prodigy in music of all time. He started playing the piano, on his own initiative, at age four and by age five had already started composing. His first symphony was written when he was eight and his first opera by age eleven. No other composer I know of was this precocious. But in his early years he was very much an imitator and his father noted that he could copy any musical style. He was exposed to a lot of different music as a child because from age seven to ten he, with his sister and father, toured the capitals of Europe. On this trip he met and was influenced by Bach's son, J. C. Bach, resident in London. Here is a duet for two pianos by J. C. Bach, that I suppose he might have even played with young Mozart:


Neither the young Haydn, nor the young Beethoven was nearly as well-travelled. In both their cases, they pretty much moved from their place of birth to Vienna and that was it, Haydn spending summers on the Esterházy family estate in what is now Hungary. But Mozart did a lot of traveling when young and particularly receptive. Between 1769, when Mozart was thirteen, and 1773, he and his father traveled to Italy three times. Mozart was particularly appreciated by the Italians and had his first successes in opera there at the Teatro in Milan. Here, from the Wikipedia article on Mozart's Italian journeys, is a map of where he went on the first trip: 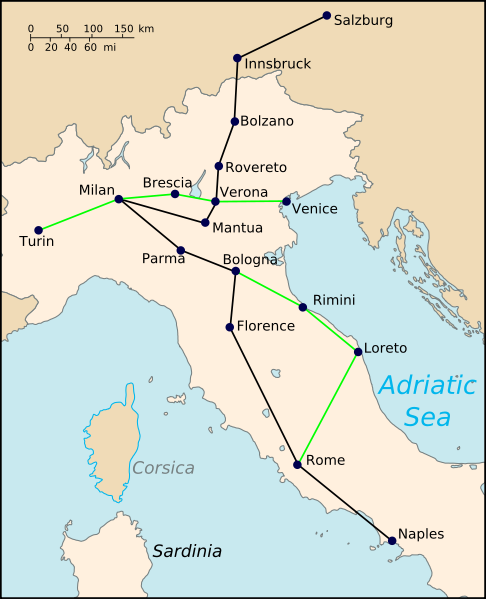 As you can see, their travels were extensive. Spending so much time in Italy, overflowing with music, in these formative adolescent years, made a real impression on Mozart's music. The grace, fluidity and sheer melodic invention of his music which sets it apart from that of Haydn and Beethoven, seems to me to be a reflection of his Italian experience. Neither Haydn nor Beethoven ever traveled to Italy. I think this influence also explains why Mozart was such a huge success as an opera composer when Haydn and Beethoven were not.

Here is a sample of Mozart's Italian style, the Divertimento in F major, K. 138, composed in Salzburg just a few weeks after returning from Italy in 1772:


This kind of sunny, graceful, lucid music sets Mozart a bit apart from both Haydn and Beethoven, who tend to be a bit heavier and more Germanic.

Mozart set himself apart not only in excelling in opera, the quintessential Italian musical genre, but in choosing genres for himself in which he could excel. The piano concerto is one of the most important. There were hosts of keyboard concertos since J. S. Bach, the father, invented the genre, modeled after Vivaldi's violin concertos. But even great composers like Haydn tended to write dull concertos. It was Mozart that made the piano concerto the great medium that was later developed by Beethoven and others. But I have written before about Mozart's piano concertos in many previous posts such as this one. Today I want to talk about a different medium in which Mozart is the acknowledged master: the string quintet.

The string quartet was the single-handed invention of Joseph Haydn and he wrote great ones throughout his life but I don't think I have ever even heard of a string quintet by him. The only string quintets by Beethoven are a couple of arrangements of other pieces. The quintet form was dominated by the Italian Boccherini, a cellist, who wrote for string quartet with added cello. While charming, the over one hundred examples are rather lightweight. Mozart developed an entirely new version of the string quintet by writing for two violas instead of two cellos. This gives a lot more weight to the inner voices, which was particularly a strength of Mozart. He wrote six fine examples of which the pair written in 1787, one in C major and one in G minor are outstanding. The next year he wrote another pair of great works in the same keys: the Symphonies Nos 40 and 41.

The Quintet in C major, K. 515, opens with the longest sonata form movement before Beethoven at around fifteen minutes duration. Just one of the extraordinary things about this movement is the opening theme, which is structured with three opening phrases, each five measures long! I'm sure you have heard many times about the balance and clarity of the Classical era and how the phrases are "typically" (that academic evasion) eight measures long. Mozart is famous for his irregular phrases which somehow always sound just right: 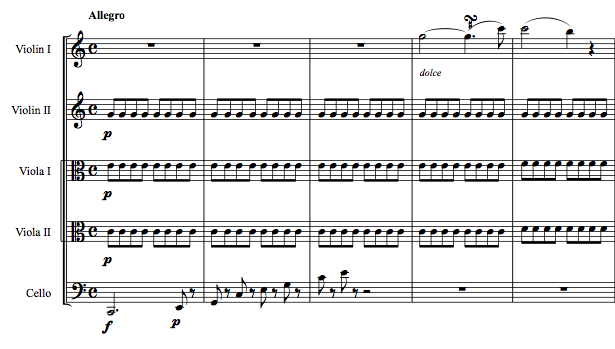 Notice how the three measures of the cello are answered with the two of the first violin. We can hear other examples of this kind of texture in one of Haydn's op. 33 quartets and one of Beethoven's Razumovsky quartets. But never more graceful than here. I am not going to go through and analyze the whole movement as that would take up entirely too much time and space. But a couple of things: immediately after those three phrases with the cello answered by the first violin, he reverses it and has the same material, but this time the violin has the rising line and the cello the turned response.  Also notice how very, very long he sticks to the tonic before finally going to the dominant and giving us three new themes. Here is a live performance of the whole quintet:


It was very largely as a response to Mozart's six quintets that so very many other fine quintets were written by Schubert, among others.
Posted by Bryan Townsend at 9:41 AM