Masterpieces of Music: Beethoven Symphony No. 6

I was in a restaurant for lunch the other day and was delighted to notice that a Beethoven piano sonata was playing on the sound system. Rather uncommon these days! Beethoven is a challenging composer in so many ways and even a lot of scholars avoid his music. The "new musicology" position on Beethoven is that his approach to harmony is akin to a metaphor for rape. Well, that's how to get a name for yourself in musicology these days! Beethoven's enormous renown during the 19th and first part of the 20th century is almost a barrier to his appreciation in the 21st century.

Beethoven is often called a revolutionary and certainly his approach to composition was formidably bold. He reinvented how to structure music with his harmonic invention and motivic focus. Every note took on a new significance and dynamics began to be built into the structure of the music. In some pieces, such as the Eroica symphony that I recently posted on, there is certainly a feeling of revolutionary fervor. But in even more compositions, like the Symphony No. 6 that I want to look at today, there is simply the exploration and mastery of a genre. That Beethoven was no literal revolutionary is attested to by the fact that he was supported by the patronage of the highest levels of Viennese aristocracy. One of his very few composition students was the Archduke Rudolf (to whom was dedicated his "Archduke" Trio), the younger brother of the Emperor. He was kept in Vienna when offered a kapellmeister job elsewhere by an lifetime annuity contributed by a circle of aristocrats.

Now on to the 6th Symphony. Here is a page from the manuscript: 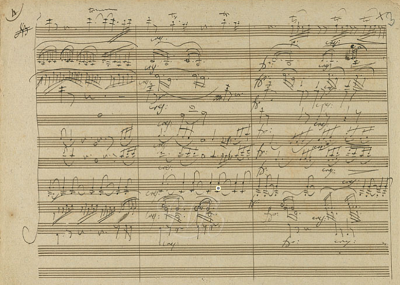 As opposed to the revolutionary character of the 3rd Symphony and the astonishing intensity and focus of the 5th Symphony, this a sinfonia characteristica which is described as


a type of symphony composed mainly in the eighteenth century which was embellished with a printed text (either one line or many paragraphs long) which pointed the listener in a specific direction, so that the music would convey a thematic expression, i.e., “tell a story”. Music scholar Richard Will has identified over 225 such works written between 1750 – 1815, the majority of subjects being these five: pastoral, military, hunts, storms, and national or regional expressions.

Beethoven's 6th Symphony is the most famous of the genre and was the inspiration for 19th century programmatic symphonies like Berlioz' Symphonie Fantastique. The standard layout for the classical symphony was four movements, which Beethoven followed in his other symphonies. But this one has five movements as follows:
The music is full of references to extra-musical phenomena both specific, as in the bird-calls towards the end of the second movement, and general, as in  the repetitive rhythmic cells of the first movement that suggest the span and fecundity of nature. The third movement depicts the festivities and dancing of country folk and the fourth a thunderstorm. The last movement is a joyous finale. Beethoven, very helpfully, labels the bird calls in the second movement as nightingale, quail and cuckoo:

All of this is very much in contrast to many other of Beethoven's works: it is often serene, joyful, sparkling or delighting in simple pleasures. This is a very important side of Beethoven's personality that appears in some movements even in his darker works. The late string quartets often contain movements that resemble country dances.

It is a bit ironic that this, one of his least revolutionary symphonies as far as compositional technique goes, was also one of the most influential for 19th century composers. They despaired of achieving the intensity and focus of say, the 5th Symphony, but they delighted in using the 19th century orchestra to set scenes and tell stories. Indeed, until Brahms, most 19th century orchestral music takes this symphony as a model. And why not! This symphony is pure aesthetic delight. Here is an excellent performance conducted by Philippe Herreweghe:

Posted by Bryan Townsend at 9:55 AM