Masterpieces of Music: Mussorgsky, Pictures at an Exhibition

The Russian composer Modest Mussorgsky (1839 - 1881) was by temperament and circumstance both a creative genius and a maverick. During his formative years music in Russia was dominated by state-supported Italian opera--no Russians need apply! There did not exist a Russian music conservatory until he was too old to attend. It is not entirely surprising then that he rejected all the traditions of European music: counterpoint, form, theory in general and conventional aesthetics. Mussorgsky was both a nationalist and a realist, two powerful 19th century movements other than romanticism. One way realism manifested itself in Mussorgsky's music was in setting the Russian language as dramatic prose reproducing the accents and tempi of Russian speech.

In his famous piece for piano Pictures at an Exhibition sometimes called the greatest Russian piece for piano, he achieves a similar kind of realism in his depiction in music of an imaginary tour of an exhibition of drawings and watercolors by his friend the artist and architect Viktor Hartmann. Michael Johnson has recently written an excellent essay on the piece in Open Letters Monthly. Alas, most of Hartmann's work is lost, but here is one of the few surviving sketches on which Mussorgsky based his composition, the sketch for the Gate of Kiev: 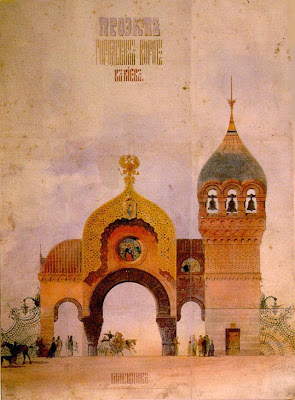 The formal plan of the composition is unique, consisting of a promenade theme in 5/4 and 6/4 that suggests a Russian folksong and alternating with this, ten movements, each depicting a different sketch or watercolor of Hartmann. These movements do not restrict themselves to Russian images, but include an old Italian castle, gardens in Paris, a ballet, a conversation between two Jews, a Roman catacomb, a marketplace and, most odd, a hut on hen's legs! For more detail, see the Wikipedia article.

The piece is, apart from its extraordinary imagery, an extreme exercise in pianistic virtuosity. One of the most acclaimed performances is that of Sviatoslav Richter in Sofia, Bulgaria in 1958. Here is a recording of that live performance:


I was going to extract some examples from the score and do a little analysis, but my source for scores online seems to be unreachable today so that will have to wait for another time. In the meantime, enjoy listening to this remarkable piece. It is not so common that someone comes up with, not only a truly unique piece of music, but one that also reaches out to a wide audience.

Posted by Bryan Townsend at 8:43 AM