My title today is a quotation from Sergei Prokofiev which, I hope, emulates or demonstrates the kind of irony that became an important element of his music. Prokofiev's quote was a comment on Stravinsky's 'neoclassical' music such as his Octet for Winds (1923) and the irony is that he was going to take much the same approach and not only that, but had already done so in his "Classical Symphony" of 1917. Now you could argue that what Stravinsky was doing was more 'modernist' and what Prokofiev was doing was more nostalgia, but the truth is, if Stravinsky sounded like "Bach with smallpox" then Prokofiev sounded a bit like Haydn with smallpox. Quite ironic, really. Here is the third movement from the "Classical Symphony", a gavotte:


I chose this movement because it is so short, meaning that looking at the details won't take a lot of time or pixels. Here is the first part of the score in piano reduction: 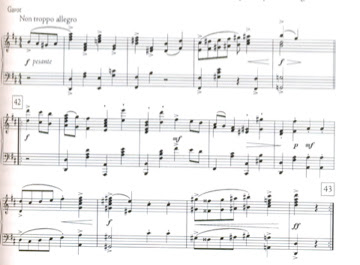 What sort of music is this, aesthetically? From a theoretic standpoint it copies the gestures of 18th century music, but the voice-leading is all wrong. For example, while the upbeat is fine, and the first two beats of the first measure are ok as they are a simple D major tonic chord, the next two beats are seriously warped. We have a C major chord in first inversion, then in second inversion, which might be ok if it went to, say, an F chord. But instead it goes to a B major chord in second inversion. It is as if Prokofiev were asking himself in each measure, "what rule of counterpoint can I break now?" The awkward tension is maintained because all this is happening within a perfectly conventional context. This section ends, for example, with a perfectly correct V7 - I cadence in D major.

So I don't think 'nostalgia' is quite the right way to describe this kind of writing. It is ironic, perhaps cynical, which was very much the context of the time. The feeling of most artists by the end of the First World War was that all illusions had been shattered. All they had left was their cynicism and a kind of bitter nostalgia. I think we can hear this even more in the later Octet by Stravinsky that I mentioned above:


The premiere of this music stirred up quite a fuss because of what Stravinsky had done previously, especially the weighty primitivism of the Rite of Spring. How could he possibly be writing this light, diverting music? Yet another irony.

I want to put up some more of the "Classical Symphony" of Prokofiev. Here is the first movement:


And as a comparison, here is the first movement of Dmitri Shostakovich's First Symphony, which dates from a few years later:


This series of posts on Prokofiev will continue and next I will take up some later works.
Posted by Bryan Townsend at 12:19 PM