Prokofiev and the Problem of Aesthetics

I was having a discussion about international economics with someone maybe ten years ago when I stumbled across a principle that has proved useful to me ever since. Of course, I'm not claiming to have discovered this--I think it was probably Socrates who did originally--but it was an important realization for me. I found myself saying something like the following: "You know, I don't actually care which of us is right and which of us is wrong on this question. In fact, I don't even care too much what the right answer is. But what I am interested in is how we get to the right answer."

How do you get to the right answer is the most important thing. The assumption here is that there is a "right answer" of course and the trend for many years now has been to erase problems by denying that there could be a "right answer" to many questions. But of course, there are just as many right answers as there ever were! How much money do you have in your bank account? There is only one right answer to that question. You have to understand that where the distinction between the right answer and the wrong answer has been made foggy is often an area where it is very beneficial to someone that this be the case. I recall a little dialogue on Angel where Cordelia, possessed by an evil entity, is explaining to Connor that 'good' and 'bad' are just words and don't apply to them because they are "special". Ah, how lovely our rationalizations are!

But there are many levels of right and wrong answers, of good and bad, and of aesthetic quality. Some of these levels are very complex and don't admit of simple answers. Does anyone remember the famous answer to the Ultimate Question about the "meaning of life the universe and everything"? It is found in Douglas Adams science fiction comedy The Hitchhiker's Guide to the Galaxy. The answer is "42". The joke is that the answer is absolutely meaningless because it is an excessively simple answer to an excessively complex question.

If we want to have any useful answer to the question of the aesthetic quality of the music of Prokofiev, then we need to craft an answerable question or questions. I don't think the question can be as simple as "is Prokofiev's music good or bad?" I think we have to ask more detailed questions about melody, harmony and rhythm and by that I mean, having a close look at some pieces. So we may come up with answers that are tentative: "in some pieces Prokofiev tends to do X, Y and Z." We might ask a question that is more musicological than theoretical: something like "what kind of contribution did Prokofiev make to the symphonic or sonata genres?" Or to the opera or ballet. What sort of aesthetic strengths and weaknesses does he have and how do we know?

So this is a kind of philosophical outline of how to approach an aesthetic question. Now let's take a run at it. I want to start by picking a piece that is widely enjoyed in hopes this will assure that it is, to some degree, representative. The "Dance of the Knights" from the ballet Romeo and Juliet seems to be suitable:


Here is how that opening theme looks: 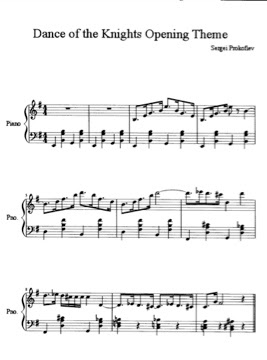 An opening theme is pretty crucial as it is what most listeners will remember and respond to and this is a good one. It is conventionally laid out. After two measures of introduction of the tonic chord, E minor, the theme simply outlines the tonic in a dotted rhythm. Absolutely simple. But many very successful pieces have done much the same thing. Outlining harmonies is the basic melodic technique of the Classical Era and Haydn, Mozart and Beethoven did it over and over. The second harmony is also conventional as it is a dominant. What makes it different is that it is a modal, not a tonal, dominant as it uses a D natural instead of a D#--no leading tone. This is a typical trait of 20th century harmony in order to sound a bit different while still using basic tonal structures. Ravel was doing the same thing in Jeux d'eau. It is in the continuation that a composer shows his ingenuity. This continuation comes in the last measure of the second line in my example. The harmony becomes more dissonant with the suggestion of a modulation. The chord F# D A C# acts as a dominant to G, which is the relative major of E minor. The C# is unusual as it is a major seventh while a dominant seventh chord calls for a minor seventh. The resolution, G D G B flat is unusual in that it is minor instead of major. So Prokofiev alters both chords. The melody intensifies by compressing: instead of the intervals being thirds, they become all minor seconds (with an octave displacement). The new motif is then repeated down one and then two octaves. The phrase ends with an accented and syncopated F# before repeating while the harmony descends chromatically to the dominant. The whole adds up to an effective eight-measure theme.

This theme reminds me of another very popular one, the Humoresque by Dvořák:


Here is how that theme looks: 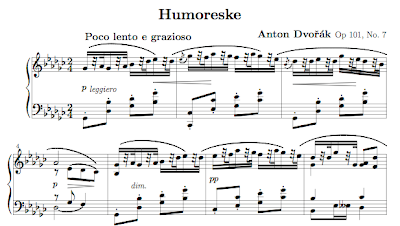 Also eight measures (I had to cut off the last one) but without the two measures introduction. The dotted rhythm is notated differently with rests instead of dots, but the effect is quite similar. Prokofiev creates a much more dark, Russian mood instead of the coy one of Dvořák. But, still, some similarities.

So here is my conclusion: Prokofiev can come up with an excellent, memorable theme based on traditional harmony but with enough twists to make it sound novel.
Posted by Bryan Townsend at 9:12 AM