I have put up two previous posts on this transplanted Ukrainian pianist, here and here. Her career has been unique in a lot of ways: while she is lovely in appearance, she has always presented herself as a serious musician; her career has been advanced largely through developing a huge fan base on YouTube; she refuses to do crossover and finally, at forty-three years of age (according to Wikipedia), she is no spring chicken. 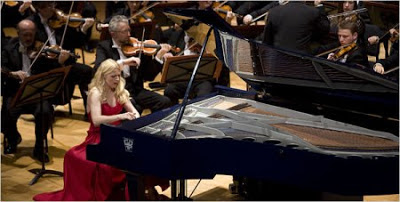 Now, on the verge of a release of her recording of the Rachmaninoff Piano Concertos on Decca, the Wall Street Journal puts up a substantial piece on her, which undoubtedly has good promotional value. So why am I exasperated? Here, have a look. Just one thing about the piece really annoys me: the headline.

The Justin Bieber of Classical Piano

Sure, she is exactly like Justin Bieber, except he is a bubble-gum pop singer who just turned 19 and she is a 43-year-old Ukrainian-American pianist. It is probably the case that an editor added the headline, but really! What it is trying to say, very clumsily, is that Valentina Lisitsa is becoming popular in a way that nowadays only pop stars do. Why pick Justin Bieber as a comparison? It seems there are no corners of the mass media that are not dumbed-down when it comes to classical music, not even the Wall Street Journal or the New York Times. They still have the occasional article written for people who are not absolutely ignorant of classical music, but any article intended for the general readership is dumb and dumber. Is there any way to turn this around? Well, that's what I'm trying to do with this blog. I don't know if it will actually help at all, but I don't know what else to do. By mixing in posts on classical and pop music, and by trying to be even-handed in critiquing both, I'm certainly trying to say something.

But enough of that! Let's listen to some of Lisitsa's playing. She is a very fine musician, indeed:

One thing to notice is that the first two minutes are a beautifully-paced crescendo the whole way! Excellent musicianship.
Posted by Bryan Townsend at 10:54 AM

"while she is lovely in appearance, she has always presented herself as a serious musician"

You imply that an attractive woman is not likely to be a serious musician. Yes, that's what your words say, regardless of your eventual assessment of her abilities.

What does her appearance have to do with her musicianship? If this were a young handsome man, would you say the same thing? If a performer is not "lovely," do you automatically consider that he or she would be a more "serious" musician? Are you a "serious" musician? Would you want your audience, or your reviewers, to evaluate your musicianship, or your "seriousness," on the basis of your physical appearance? I don't think so. It's NOT RELEVANT.

Please think again and consider revising this post, and your attitude.

I have enjoyed your blog for a long time, but this one sentence stopped me cold. I'm not sure if I'll return. Of course, the loss of an anonymous reader won't make a difference to you, but you, as a prominent blogger, have a chance to make a difference in the world of classical music. Women already get short shrift. Don't make it worse.

I think that the sentence you quote has been misinterpreted--always a danger when you are writing every day! What I had in mind when I wrote it is that there are many young musicians, both female and male, that have given in to the temptation to advance their careers by projecting a superficial image based on physical appearance. So much so that sometimes I wonder how those great musicians who are merely ordinary in appearance are going to build their careers!

I have commented on this many times before, so I am surprised that you are surprised.

I am going through your blog chronologically early to recent as you can tell. To answer the exasperated questions you posed back in 2013, I saw your blog occasionally listed when I searched on certain music related terms. I apologize but it didn't register until recently the extent and depth of your blog. Part of the problem is that the library is towards the middle on the right and doesn't indicate what is in it. So if whatever article the search engine lists doesn't relate exactly to what you are looking for at the time you just move on.

As for mixing pop and classical items that is a good strategy but only helps if people jointly search the other names in the same article. So for example if you compare Bieber with Leonard Cohen only searches which use both names will list that article high. Anyone just searching for Bieber or Leonard Cohen will never see this article because the search engines will give it low ranking compared to the more dedicated, extensive and often commercially more important listings. You are more likely to get hits the more obscure the artist for obvious reasons.

As for workable strategies, I fear if Leonard Bernstein was relatively unsuccessful 50 years ago with a national presence and a TV program for young listeners, we are at a far greater disadvantage. It is going to take someone like a Ms Lisitsa who can also write appealing classical music to get a higher profile for this type of music.
In the past that is exactly what happened. Most of the famed classical composers were also distinguished musicians at a soloist or near soloist level. These days there is a real dividing line with younger people's attitudes for artists who write their own material vs playing someone else's. Just my thoughts and thanks for your sustained efforts here.

Maury, I am delighted you are working your way through the blog. I have very much enjoyed writing it. Sorry about the deficiencies of the search function. Later on I tried to put suitable tags on each post, but they often don't give much of a clue of the contents.