I once posted a review of a book on Shostakovich's orchestral music on Amazon. The book was one of those that avoid any musical notation. The 'general reader' nowadays is assumed to be unable to read music and that is probably true. If we go back fifty years say, to Ernest Newman's hefty book The Wagner Operas, we find it stuffed with musical examples. Now the book on Shostakovich is quite useful. It tries to describe what is going on in the music and when talking about the 5th Symphony, which is on the accompanying CD, relates the comments to specific places on the disc: "at 3:28, the flute comes in with a new theme" for example (a hypothetical quote). But I found the lack of musical examples frustrating. Any mention of technical terms, even ones like 'eighth note' or 'quarter note' or 'dotted note' was avoided. The author does however talk about sonata form and passacaglia and forte. A kind of half-way solution. Nearly all books on music these days tend to follow this rule: no notation!

As a result of this, the author is forced to use metaphors all the time. The music "gallops", "whistles" and "barks". Themes "panic" or are "jerky" or "gawky". But we never are quite able to see any of this. You can probably sort it all out by close listening: "ah yes, that must be the gawky theme he is talking about." So the book can be quite useful and the author's heart is in the right place. I'm afraid I gave it rather a critical review on Amazon to which the author irately replied. I called all this "baby talk". Quite a few other readers concurred with me though.

A consistent theme in these posts will be the appreciation of learning. I like it when authors try to teach us stuff. I like to learn stuff. If you feel moved to make a comment pointing out something I have missed (as someone did the other day on the "Loudness Wars" post) I will be quite grateful. I don't like the attitude "you don't actually have to know anything." The more you know the better. If you are a music lover and listen to a lot of classical music, even knowing a little bit about music notation will be a great boon. It's not that hard.

The development of music notation was one of the greatest achievements of the human mind--a far more difficult one than the development of the alphabet. It occurred once in human history, in Southern France and Northern Italy around the year 1000. The Benedictine monk Guido of Arezzo was an important figure--at least the only one whose name we know! Prior to this music was written in neumes, that merely gave a suggestion of melodic shape. The brilliant innovation was to draw a horizontal line that defined exact pitch. This was soon refined into four lines and then five. Modern notation uses five lines. This enabled composers to write down exactly what notes they wanted. It then took about five hundred years to solve the problem of rhythm and this was done by using different kinds of note heads, by drawing vertical lines to mark off each measure and by inventing the tie, that joined two note heads together. Voila, modern notation. It is so highly evolved that the soundtrack to a movie can be recorded in a single two and a half hour session by studio musicians. They simply read it at sight! Most of the music you hear in movies, if it was played by living musicians, was played once only.

It is really not that hard to learn the basics of this wonderful system and it will open many doors for you in understanding music. Here is a whole (short) prelude by Chopin, first the notation, then a performance: 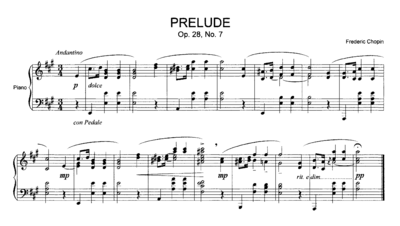 Notice I said THE notation and A performance. The notation IS the piece. The performance is just a version.

I have been teaching guitarists to read music for many years. You can start doing it about five minutes into the first lesson. In some ways it is a lot easier than learning the alphabet. The musical alphabet only has seven letters for one thing. Sure, rhythm takes a bit of work. But worth it. There is nothing quite like literacy.
Posted by Bryan Townsend at 8:40 AM

Email ThisBlogThis!Share to TwitterShare to FacebookShare to Pinterest
Labels: notation