I just ran across this post by Norman Lebrecht on violins. Some musical instruments can have a very special aura to them and at the top of that hierarchy are the instruments by the great Cremona builders. I used to play fairly regularly with a wonderful violinist who played a Guarnerius. Quite an experience. I have an extraordinary guitar built in 1983 that I have played continuously since then. A few years ago I had to have it completely restored as everything that could wear out had done so. Five cracks needed fixing, new frets, new tuners and new varnish. It was like a new instrument! And needed playing in again. A year or so ago I thought the instrument was dying of old age, as guitars can do, but it turned out that I hadn't been humidifying it enough for this dry climate. Now it is back to the wonderful sound of old. Here is a photo: 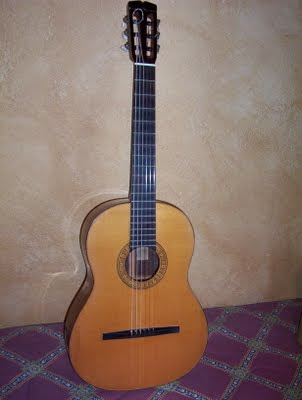 As you can see, it is an unusual design. The builder was Robert Holroyd of Vancouver, British Columbia, Canada. The top is high-altitude spruce. He actually picked out the tree himself and supervised the sawing. The grain is very tight. The sound is open and clear and the instrument has about the finest bass sound I have ever heard. I have played some fine instruments, including one of  Manuel Barrueco's concert guitars, and I would put this up against any of them. Notice the unusual bridge: it is an ebony bridge, extending much further across the top than is usual,  but narrow in the other dimension. The idea is to have the instrument 'speak' very quickly.

But to get back to the question of why people spend millions on an instrument that may not be playable, I suppose that there are a number of possibilities. One is that, like my guitar, they just need some restoration to become playable again. Another is the historical value to scholars and builders. Perhaps there are some secrets to be learned. Instruments like the Stradivarius are so rare that there is the kind of value that attaches to similarly rare and valued paintings and sculptures. There is one guitar made by Stradivarius extant: I wonder what its dollar value would be?

For me, I have a relationship with my guitar that would be almost impossible to replace. I'm sometimes tempted to fly to Australia and buy one of those wonderful new instruments by Greg Smallman. But as long as my Holroyd hangs in there, I don't think I will. From many years of playing, I know exactly how it will respond on every fret. I also think that one 'trains' the instrument according to how one plays it. After enough years, it responds exactly the way you want it to within the limits of possibility.
Posted by Bryan Townsend at 9:12 AM

Email ThisBlogThis!Share to TwitterShare to FacebookShare to Pinterest
Labels: Guitar