I'm not very good on the retail end of music. Once, when I was young, I had a job working as a sales clerk in a music store. Mostly I was ok as my knowledge of music was a help. But occasionally it actually prevented a sale. For example, one Saturday morning a father and son came in and were looking at this little device we had that aided transposition. It was in the shape of a couple of little wheels that could rotate with the names of notes on them. As I recall, one wheel had a little window through which you could see note-names on the other wheel. I really can't remember how it worked.

In any case, they wanted to buy one and were asking how it worked. I, in my obliviousness to the principles of retail, said, "you don't actually need this, you can just use your hand." Huh? I was going back to the discovery, about a thousand years ago, of Guido of Arezzo and his famous "Guidonian hand". Actually, I wasn't using the hexachordal system mapped on to the hand by Guido and his successors, but a much simpler version that I'm not sure who came up with. What I am going to do is use the left hand as a device to transpose music.

But first, what the heck is this mysterious transposition thingy?

Lots of musicians read this blog and already know all this stuff, so for you folks, sorry for the recap. But I think a lot of non-musicians also read this blog. Here is the useful Wikipedia article on transposition. The basic idea is that you can sing or play a melody starting on any note. Choral conductors give a pitch to their choir before starting so everyone starts on the same note. Starting on a particular note to sing a melody means that you are choosing a particular key. The concept of "key" is actually fairly complex, but the simple version is that a key is an arrangement of intervals. The key of C major, for example, has the notes C D E F G A B (which then repeat). The intervals that separate those notes are, respectively, tone, tone, semitone, tone, tone, tone, semitone (to get back to C). Every major key has the same intervals because, by definition, a major key is one with those intervals. Let's say you want to transpose or move the melody from C major to G major. If the melody started on C, then now it will start on G. The thing is, we have to preserve all the same intervals. So what we will need to do is make every F an F sharp so as to keep that last interval a semitone instead of a tone.

Now, how does our left hand help us? It is kind of a rough-and-ready way of moving notes from one key to another, or finding the important harmonies in the new key. I think that is what I used to use it for when I played popular music. Here is how it works. Say you are playing "Twist and Shout" in C major. The three chords will be C, F and G7. Now look at the hand: 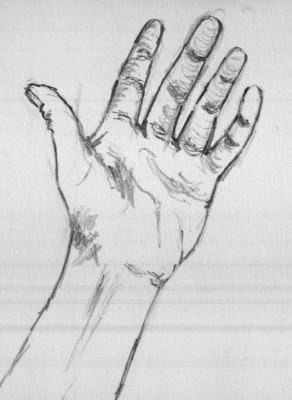 Let's map the first five notes of the C scale on the hand. The thumb is C, index is D, middle is E and so on. So the little finger is G. The fingers corresponding to the three chords are thumb, C, ring finger, F and little finger, G (or G7). Now, let's say that C doesn't really work. Let's say that D will be a better key, one note higher. As a matter of fact, the Beatles do the song in D major. So, instead of mapping out CDEFG on the five fingers, we will instead start on D, so: DEFGA. One little complication: in order to keep the same intervals, that F will have to be sharp: DEF#GA. So, the fingers that were originally CFG, the thumb, ring and little, now correspond to DGA (or A7). Voila, the song is transposed. How about F major? Easy, now we start with F on the thumb and have FGABC (except, to keep the same intervals, the B will have to be a B flat). So now our three chords are F Bflat C.

Works for any transposition. If you get into more complicated scenarios with more harmonies, then it is probably best to sit down and create your own little transposition chart, like this:

Just go from the note above to the note below. Every C becomes an A, every E becomes a C# and so on.

People who play transposing instruments, meaning instruments that sound differently than written (and how did that happen?) learn to do this with great facility at sight. For example, people who play B flat trumpet see a C note and play a B flat. So if you want them to play a C, you have to write a D. Clear? Sometimes they have to play music written in C, so they learn to transpose at sight. I was playing the Villa-Lobos Sexteto mystico once, which is written for the extremely odd ensemble of flute, oboe, alto saxophone (in E flat), guitar, celesta and harp. Neat sound, actually! Here it is:


The saxophone player had to miss one of the rehearsals so the director of the chamber music series, a very capable French horn player (usually in F), sat in and played the alto saxophone part at sight. Horn players are really good at transposing at sight, but I was pretty impressed, because this had to be an unusual one, transposing music written for an instrument in E flat (every C comes out sounding as an E flat) to an instrument in F (every C comes out as an F) had to be weird.

Well, that's the end of this little post on transposition. Let's end with "Twist and Shout" (in D):