How do composers think about what they do? I think some of the basics are that once you have completed an earth-shaking work like the 5th Symphony, there is the need to regroup, to step back and look in a different direction. This is certainly what Beethoven did in the "Pastoral" Symphony which was actually a piece in a very established style, the sinfonia characteristica. But what next? One thing was to pause: after the enormous outpouring and effort that produced the 5th and 6th Symphonies, the Razumovsky Quartets and so many other remarkable works, during this decade (1800 - 1809) of immense productivity, the next decade (1809 - 1819) produced much less. There were fewer pieces and they, with the exception of an isolated work like the Quartet in F minor Serioso, were on a smaller scale.

But there were important advances bubbling below the surface for Beethoven, after a promising youth and a spectacular "middle period", was going to have a "late period" that continues to amaze us to this day. The Symphony No. 7 was written in this decade of introspection and it goes in a new direction, though one that fits very well within one of Beethoven's fundamental interests: rhythm. Wagner was one of many to notice this aspect of the work when he called it the "apotheosis of the dance". Yes, this symphony dances and dances more than any other before or since.

It begins with a splendid and expansive introduction that is both lyrical and dynamic. Here is the first page in the original copyist's manuscript:


For some reason this introduction always reminds me of "Hello, Goodbye" by Paul McCartney from Magical Mystery Tour, probably because of the ascending scales:


But it is what comes after this introduction that is unusual. Here is the beginning of the Vivace:


What is so strange about this? It's the time signature. Every Beethoven symphonic first movement up to now has been in either some version of duple time (2/4, 4/4 or alla breve) or in 3/4 (the 3rd Symphony). This movement is in 6/8, which is a dance time signature found most typically in gigues, originally an English dance, the jig. It is also a popular time signature in Spanish dances like the Canarios and Zapateado. Beethoven does not explore all the possible hemiolas that the Spanish do, instead he focuses just on two rhythmic variants: the dotted version we hear at the beginning in the example above, and the simple undotted version. That's it. Rhythmically it is a very focused movement and most of the variety comes from the harmonies which tend to veer towards C major and F major, rather remote for the tonic key of A major.

The second movement is one of Beethoven's most popular and had to be repeated at the premiere. It is in the tonic minor, which relates to the harmonies of the first movement. It has the kind of simple, haunting beauty that few composers seem capable of. But since this is a symphonic movement, not a pop song, there are some elaborations, in particular a fugato on the theme. Here is part of the opening with a particularly lovely tune in the violas:


The third movement, a scherzo, is in F major and very quick, a presto. Here is how it begins: 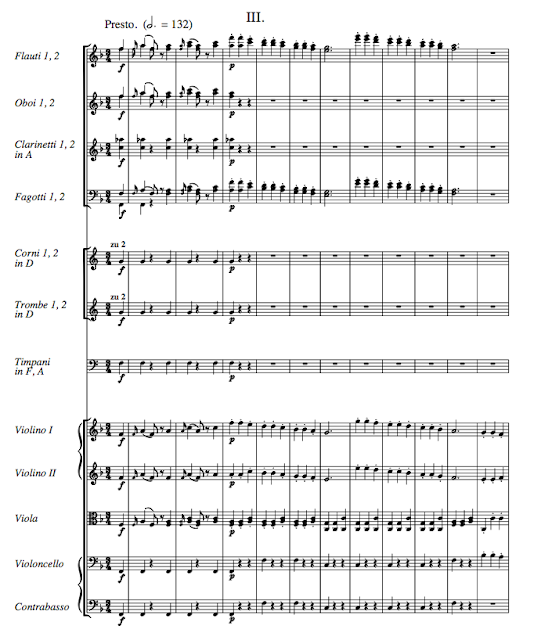 The phrase "whirling dervishes" comes to mind. There is a contrasting trio in a slower tempo with sustained chords in the unusual submediant key of D major. Everything in this symphony seems to avoid the simple fifth relationships in favor of mediants and submediants.

And in the last movement even more "Bacchic fury" in the words of Donald Francis Tovey: even more dance energy. Here is the opening: 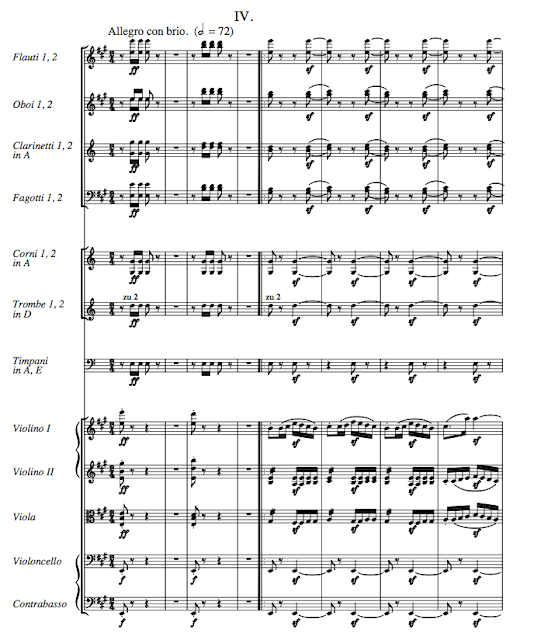 In the finale Beethoven outdoes the rhythmic energy of the previous movements, which is certainly what one would hope for!

Let's go to Daniel Barenboim and the West-Eastern Divan Orchestra at the 2012 Proms:

Posted by Bryan Townsend at 9:21 AM

Just wondering if the use of the mediants and submediants invoke a kind of "fantastical transcendence" for the listener. To my ears, this is a symphony that takes place outdoors rather than indoors, it appropriates dancing as a kind of flying, letting go, prancing in fresh air. There is something very deeply dervish-like about this symphony.

One of my dear favourites. :)

The exploration of the mediant and submediant (flat submediant in this case) keys was something that the Romantics pursued. Schubert in particular made the flat submediant a vehicle for Romantic introspection. Oh yes, the Symphony No. 7 takes second place to none other in its celebration of the sheer joy of existence!