The second movement of the 9th is a scherzo of a kind we have become familiar with in Beethoven's symphonies, but this one is the mother of all scherzos. First of all, it is almost twice as long as the longest symphonic scherzo he wrote previously. Most Beethoven scherzos run four or five minutes (the scherzo to the 7th Symphony is longer at eight minutes), but this one is a monstrous thirteen minutes long! Using the devices of fugal texture, hypermeter and some brilliant writing for winds, he pretty much exhausts the scherzo genre, leaving very little for any subsequent composer to do.

Here is how the opening theme goes:

and here is the continuation:


The theme is presented in four strict fugal entries. It consists of two parts: the dotted octave figure which is a kind of introduction, followed by the stepwise passage that follows. Beethoven will take that single measure motif and use it extensively throughout the scherzo. Here is a typical passage: 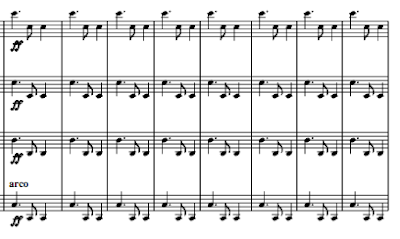 Sometimes, just so the players don't forget, he marks nearly every note with an "f" for "forte". That octave dotted motif is also heard frequently on the tympani--probably the first time where percussion plays a thematic role.

As you might expect, rhythm is an important structural element in the movement. It provides us with a great example of "hypermeter". Hypermeter is a term coined in the 1960s by the theorist Edward T. Cone to describe a situation where measures are grouped to create a larger scale meter. We can see this in a situation where a section ends with one or more measures rests--they are there to complete the hypermeasure: This also explains the odd instruction in the score of "Ritmo de tre battute": 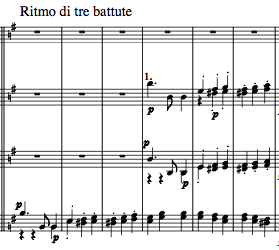 What Beethoven is telling us here is that he is changing from a hypermeter of four measures making up one hypermeasure to three measures. In the example above, the six measures make up two hypermeasures. Later on he changes back: 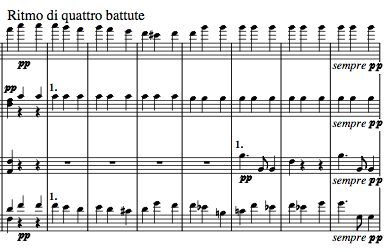 The above example is two hypermeasures, each with four measures. Beethoven is calling this a "rhythm of four beats" because, at this quick tempo, each measure is a beat.

He even manages to create a "rhythmic cadence" with hemiola (grouping pairs of quarters to create half note beats). This is how he ends the scherzo and transitions to the contrasting trio which is in D major, alla breve with smooth, flowing lines. Here is that "cadence":

Then, after the trio, the whole scherzo comes back again. A truly remarkable movement based on some very simple basic ideas, with the maximum possible extracted from them. Here is the movement performed by the Staatskapelle Dresden orchestra conducted by Sir Colin Davis:

Posted by Bryan Townsend at 7:29 AM

Hello. Fascinating blog, which I've taken to reading recently. Since I'm a dilettante I'll go ahead and ask the following.

You surely have more musical knowledge than I do, and it's been a long time since I was a music student, but one of your last comments sounded odd to me. I don't think that last example is hemiola (and I don't think your parenthetical definition of it is correct). Doesn't hemiola require a rhythmical transformation with a 3:2 ratio?

Welcome to the Music Salon. I very much appreciate your comment. Hemiola, Greek for "one and a half", is usually the term used to describe the situation where two measures of 3/4 are turned into one measure of 3/2, or where a measure of 6/8 is turned into a measure of 3/4. This is done by rewriting the rhythms. So where the 3:2 comes from is that you now have three beats in the time of two beats (3/4 where there was 6/8 or two beats of a dotted quarter). Beethoven is doing something a bit different as he is creating what I called a rhythmic cadence as a transition from 3/4 to 2/2. He writes pairs of quarters--notice where the fortes are--which are equivalent to half notes. If he were still in 3/4, this would be a typical hemiola where two measures of 3/4 become one measure of 3/2. He gets an extra half note beat out of it because he has changed the meter. The effect, to the ear, is exactly like that of a hemiola.

Thank you, Bryan. I hadn't thought of the section preceding the example being in a triple meter. That makes sense.

Possibly my favorite movement. Interesting thing about hypermeter (first time I hear about I think).
"The above example is two hypermeasures, each with four measures. Beethoven is calling this a "rhythm of four beats" because, at this quick tempo, each measure is a beat."

Since it's 3/4 time and one hypermeasure is four measures wouldn't it mean it's similar to 12/4 time? Or am I missing something?

No, Rickard, you aren't missing a thing! The scherzo was traditionally written in 3/4 and as Beethoven sped up the tempo, this led to the "hypermeter" phenomenon. Yes, it is functionally equivalent to 12/4, but Beethoven preferred to keep it in 3/4 and just group the measures. Six of one half dozen of the other. I can't think of a single scherzo from the period that was notated in anything other than 3/4.

Hello..May i ask please. What is the compass of beethovens symphony?thank u

Hi Unknown, you may well ask, but I am not sure what you mean by your question. The term "compass" has many meanings, in music it refers to the range of a musical instrument. We can talk about the compass of, say, the violin or flute, but we usually don't refer to the compass of a particular piece for orchestra. The compass of an orchestra goes from the lowest note on the contrabasses to the highest note on the piccolo (at least in Beethoven's orchestra). If you look at the score of the 9th, you can easily see what the highest and lowest notes are. But I suspect that was not what you were really asking?