If you do a complete survey of all the Beethoven symphonies as we are doing, one thing that becomes very evident is that we have a distorted notion of Beethoven based largely on the odd-numbered symphonies. The stereotypical view of Beethoven is the heaven-storming heroic figure of the 3rd, 5th and 9th Symphonies. But what if the only symphonies we knew were the 2nd, 4th and 6th, for example? We would think of Beethoven far more as a genial, boisterous, joyful character, delighting in every harmonic, rhythmic and dynamic surprise he can toss our way. None of the tortured depths that we hear in the odd-numbered symphonies.

Beethoven is a complex character, not just the tormented romantic artist, but also the comic trickster. Not just the composer of touching slow movements of transcendent beauty, but also of driving dance movements and finales.

The year 1806, when this symphony was composed, was one of the most brilliantly productive of his career. He composed the three Razumovsky String Quartets, the Appassionata Sonata, the Fourth and Fifth Symphonies, the Violin Concerto and the Fourth Piano Concerto. The premiere of the 4th Symphony was in a concert that also saw performances of the Coriolan Overture and the 4th Piano Concerto.

We have seen a number of different kinds of Beethoven introductions: the harmonic trickery of the adagio to the First Symphony, the splendid complexity of the Second while the Third Symphony omits any introduction but simply launches into the main theme preceded only by two tonic chords. The 4th Symphony has an adagio introduction that is harmonically obscure and quite deceptive as to character. It starts like this: 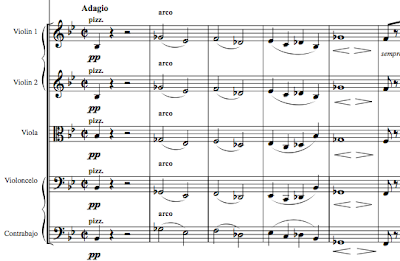 After that we rather expect a dark sort of music, but à la Haydn, this prefigures a very sunny allegro:

Sorry to chop it up, but it runs from one page to another in the score.

One element in this symphony that is surprisingly strong is rhythm as we can see in the beginning to the second movement where the contrast between the accompaniment and melody is extreme:


He even gives this figure to the tympani:

The third movement is one of those syncopated, hurtling scherzos that Beethoven does so well: 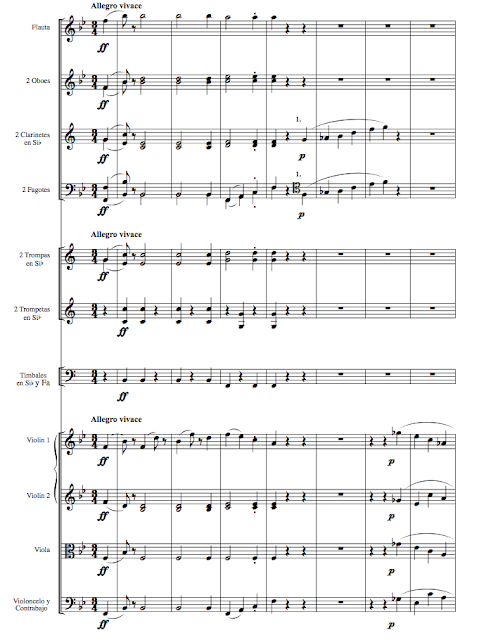 And the last movement is a simply brilliant moto perpetuo that goes and goes. The last movement of the third Razumovsky quartet, op 59 in C major is a similar exercise in spinning out a never-ending rush of notes. Here is how the first phrase looks in the first violins in the symphony:

The 4th Symphony is a much-underrated work, probably because it is sandwiched between two symphonies that make earth-shaking transformations in the nature of the genre: the 3rd and 5th. This one is simply a great piece of music that no-one else could have done so well. No, not even Haydn nor Mozart since they would have done it brilliantly differently. Beethoven continues to develop and explore his unique approach to rhythm and harmony and makes more and more use of the winds and tympani in the structure.

Let's listen to an outstanding performance by Daniel Barenboim conducting the West-Eastern Divan Orchestra at the 2012 Proms:

Posted by Bryan Townsend at 8:01 AM

Heard this symphony (along with Hector Berlioz's Symphonie Fantastique) live last month. It's a very interesting symphony but as the concert notes said: rarely performed.

Yes! And the Symphony No. 8 is even more remarkable.