I append the nickname "Eroica" to the title because it is one of the few examples where the name comes from the composer himself. I have previously written about the Third Symphony here.

As that post discusses a few things about the first movement, I won't duplicate it, but mention a few other things. One important thing to note is that this is the first symphony that was written after Beethoven's increasing deafness had become too serious to ignore. Whether there was a causal relationship between that and the astonishing strides made in his composition is probably unanswerable. But we will keep asking the question. My personal sense is that, given Beethoven's thorough preparation in music, he could continue to work despite being cut off from what we usually consider to be an essential: the ability to hear what he had written. From now on, he could only hear his music in his mind's ear. There may have been two consequences of this: first, that it afforded him a freedom from the usual constraints and second, it isolated him from the distractions of the sounds of the world.

One aspect of the symphony that has been belabored to death is the connection to Napoleon. The French ambassador to Vienna had suggested that Beethoven write a symphony inspired by the career of Bonaparte as early as 1798 and in the summer of 1803 he began to follow through. The idea produced a mammoth work of unprecedented drama and, in the words of Richard Taruskin, "a sense of overriding dynamic purpose uniting the four movements." In 1804, however, in reaction to Napoleon crowning himself Emperor, Beethoven rescinded the dedication and changed it to "the memory of a great man" --this may have been ironic!

I happen to think that the actual inspiring event is not terribly important. That Beethoven sensed the immense energy released by the French Revolution, as encapsulated in the person of Napoleon, and then created a musical analogue to that energy is not so surprising. That he did it so powerfully and successfully is more the point. The fact that he changed the dedication shows that the music is inherently non-political, I think. It captures the unleashing of the energy of the mass of people that were being freed from the bounds of an hierarchical social system and transmutes it into music. This is rather different from the real 'political' music of the day, the songs and marches associated with the French Revolution.

In my previous post I talked a bit about the themes of the first movement. But there are three other movements, so let's have a brief look at them. This is a huge symphony. At nearly an hour in length, it is two or three times as long as previous symphonies. Each of the first two movements is nearly as long as a symphony by Haydn or Mozart. After that astonishing first movement, that creates new heights of tonal drama and structural integrity, there is a funeral march. This is not entirely unprecedented, as there is a symphony by Haydn dating from 1772 with the nickname "Trauer" ("mourning) that has a funereal slow movement (Haydn asked that it be played at his funeral). But nothing quite like this had been included as part of a symphony before: 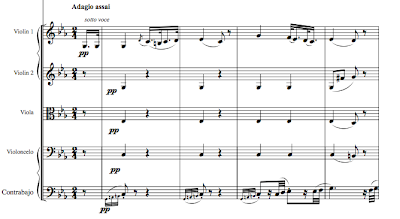 Chopin followed suit by writing a funeral march as the third movement of his Piano Sonata No. 2.

And here is the theme:

The bass line appears first and is varied before the melody itself.

Now that we have looked at the first two symphonies, which don't depart too extensively from their 18th century predecessors, we can see how really monumental the Symphony No. 3 is. If Beethoven had never written another note, with this symphony he has set the terms and scale for the symphony for the next hundred years, right up to Mahler and beyond.

Posted by Bryan Townsend at 7:57 AM