As regular readers well know, the Friday Miscellanea is where the less-serious items end up. And what could be less serious than an article about what songs go with your favorite beer? (Any Deadmau5 concert perhaps, but I digress.)

The least-objectionable combination on the list is Gotye's Somebody That I Used to Know and Stella Artois. But I would suggest instead a delicious combination of my favorite beer, Mort Subite from Belgium, drunk while listening to a Vieuxtemps violin concerto. 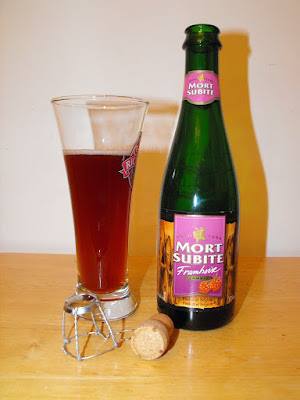 Mort Subite runs about 9% alcohol. Here is Sarah Chang with the Violin Concerto No. 5 by the Belgian composer Henri Vieuxtemps:

We all struggle with those weird and wacky Internet abbreviations, so now there is a handy guide to them: 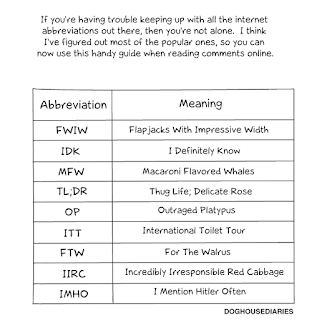 Gunther Schuller has passed away at 89 years. He was a pioneer in what he termed "third stream" music, i.e. music that combined different genres and styles. Here is an example, his "Variants on a Theme of Theolonius Monk" in collaboration with Jim Hall:


Alex Ross offers a brief eulogy with this quote from Schuller:


"Third Steam is a way of composing, improvising, and performing that brings musics together rather than segregating them. It is a way of making music which holds that all musics are created equal, coexisting in a beautiful brotherhood/sisterhood of musics that complement and fructify each other. It is a global concept which allows the world's musics— written, improvised, handed-down, traditional, experimental— to come together, to learn from one another, to reflect human diversity and pluralism. It is the music of rapprochement, of entente—not of competition and confrontation. And it is the logical outcome of the American melting pot: E pluribus unum."

While you have to admire the idealism, the critic in me can't help but mention a few caveats: first of all, this manifesto subsumes musical considerations into purely political ones, likening the practice of making music in different styles as "segregation", giving musical styles "civil rights" as if they were persons, absorbing all the musics of the world as if they were all immigrants to America's melting pot. As a Canadian, it makes me shake my head in puzzlement. The point where it all falls apart is the idea that "all musics are created equal" which is nothing more than the myth of multiculturalism asserted as a fact.

The way I see it, good music is created by means of a ruthless process of elimination and self-criticism that cruelly throws out everything that is not of the highest quality. But maybe that's just me...

This paper, titled "A Sustainable Music Industry for the 21st Century" looks quite interesting. Judging from the abstract, it is an historical and economic analysis of how we got where we are and what can be done to fix it.

As a composer I try to model myself after the great Japanese artist Hokusai who said:


From around the age of six, I had the habit of sketching from life. I became an artist, and from fifty on began producing works that won some reputation, but nothing I did before the age of seventy was worthy of attention. At seventy-three, I began to grasp the structures of birds and beasts, insects and fish, and of the way plants grow. If I go on trying, I will surely understand them still better by the time I am eighty-six, so that by ninety I will have penetrated to their essential nature. At one hundred, I may well have a positively divine understanding of them, while at one hundred and thirty, forty, or more I will have reached the stage where every dot and every stroke I paint will be alive. May Heaven, that grants long life, give me the chance to prove that this is no lie.

Here is one painting from his famous series "Thirty-six views of Mount Fuji", this one is "Imume Pass in the Kai Province":

I swear Tom Service at the Guardian is getting more sensible by the day. Here he is condemning the latest cynical mashup of Brahms and Radiohead.


Have we really reached this nadir of all musical cultures where we can no longer distinguish the meaningful differences between anything, and that the only index of pop music’s quality is how it can be smeared within a symphony, or the only way that classical music can be relevant is if it’s oleaginised as part of this nausea-inducing mash-up?

In some circles, yep. But if you actually listen to the clip, or part of it, as I did, it is rather different than described. Yes, it does combine Brahms and Radiohead, but less offensively than it might have. Instead of a Berioesque clashing of different musics, it is as if Brahms had been listening to a lot of Radiohead while composing his First Symphony. This then alternates with pops concert arrangements of Radiohead songs with orchestral accompaniment. The whole thing is much blander than, say, John Zorn. I also have to disagree with another thing Tom says:


Berio, John Zorn and the whole culture of sampling across all the musical art forms relies on the creative juxtaposition and superimposition of pre-existing musical fragments, and is an essential part of compositional practice wherever you work in music.

No, this kind of mix 'n match fusion is NOT an essential part of compositional practice. In fact, one of the big problems with every piece is to find the focus so the music does not just wander around indiscriminately. I think this is what you might call a "radio" problem. We are used to twirling around the radio dial and hearing a bit of this and a bit of that, so we are become insensitive to stylistic heterogeneity. But the integrity of an artwork demands, I think, a stylistic unity.

Now I have a confession to make: after listening to the Steve Hackman arrangement, I realize that I have done something a bit similar. In my song sequence Songs from the Poets one of the songs is a setting of the poem Annus Mirabilis by Philip Larkin. In it he mentions the "Beatles' first LP" so of course the guitar part is permeated with short phrases and motifs taken from four of the songs on that album. But while some of them are like little quotations, much of the setting is a blend of motifs from the album with my own setting of the poem. Or, rather, my setting of the poem has as background the sound of motifs from the Beatles' album. But I think it still achieves a stylistic unity because, like Bartók with a folk song, I structure the harmonies using ideas from those motifs--they become structural foundations of the song.

I'm going to be recording the songs with a fine singer in September. Keep your eye on this space!

Hmm, well the correct musical envoi to this miscellanea is a song by the Beatles that was among the first pieces to exhibit the blending of different musics in a really creative way. The song is "I Am the Walrus" by John Lennon and you have to imagine hearing this on AM radio in the late 1960s to get the full effect. Note how at around the 2 minute mark it is as if you had moved the tuning dial and suddenly were listening to a different station:

Oh, and the lyrics are wrong, it is "they are the eggmen."
Posted by Bryan Townsend at 7:31 AM