I can recall attending a couple of concerts at the South Bank complex in London a long time ago and I was impressed with the quality of the music and the presentation (and that you could buy the scores of the pieces in the lobby). But the whole atmosphere of the place has now changed, apparently. There is a report at Slipped Disc by composer Christopher Gunning. After an amazing Sibelius concert he:


...came out, and wanted to saunter quietly along the Thames and Hungerford Bridge. From each eatery/drinkery loud music pumped out. Ten thousand people shouted to make themselves heard above the din. Empty beer bottles and dog-ends lined the rails overlooking the river. It was no better walking along towards Shakespeare’s Globe, where another few thousand congregated to shout at one another. What I’m saying is that a boozing culture has invaded London’s prime cultural hub and frankly it’s pretty much wrecked.

With one exception, the comments support this observation. And the dissenting comment also proves the point:


Boohoohoo I wish our ivory tower was taller!

Does it make me a misanthrope if I just want to permanently remove myself from the appalling tastes and noises of most of humanity? Oh, I see, that is pretty much the definition? Oh well, guilty as charged.

This is a pretty good review of a couple of books on how the music industry got into the situation it is in today. Here's a sample:


Stephen Witt’s How Music Got Free details decades of foolishness in the industry and its decline in the 21st century by focusing on three simultaneous developments: the construction and massive growth of the Universal label, Brandenburg’s efforts to get the MP3 taken seriously and the contemporaneous development of the internet, on which a tiny group of hip-hop fans and computer geeks slowly dismantled a multimillion-pound industry.

It is always refreshing when someone speaks out candidly without weighing all their words beforehand. Of course if an elderly scientist does it in a way that is perceived as offensive to women, then he will be condemned and asked to resign his positions and maybe even his Nobel Prize. But if it is an English teacher who doesn't want to teach Shakespeare any more because he is some dead British guy, then ok:

In the 25 years that I have been a secondary teacher, I have heard countless times, from respected teachers (mostly white), that they will ALWAYS teach Shakespeare, because our students need Shakespeare and his teachings on the human condition.

So I ask, why not teach the oral tradition out of Africa, which includes an equally relevant commentary on human behavior?

Isn't it a bit dispiriting to encounter a teacher of English who is so utterly oblivious to aesthetic quality? She really hasn't the slightest idea why we read Shakespeare.

I just ran across this extraordinary story of a concert by Rudolf Serkin back in the 1920s:


I have one and a half recordings of the Goldberg variations. The Glenn Gould, which is still marvellous in its own way, but the other one is essentially excerpts from a piano roll made by Rudolf Serkin in 1928. I was alerted to this performance by an extraordinary story I heard about a recital of Serkin in Berlin around that time. As an encore, he decided to play the entire Goldberg Variations, with repeats. After each variation, members of the audience left the hall, until by the end there were only two people left. When Serkin finally finished , he bowed to the two and recognised them. One was Artur Schnabel and the other Albert Einstein. It is as if the desire to hear this work live even at the end of a long recital was only totally present in geniuses on the same level as Serkin himself!

This is from an interview with the conductor Jan Latham-Koenig in the Guardian. Nowadays, of course, audiences are in such a hurry to leave the hall at the end of a concert that they don't even have time to hear a single, brief encore. Which pretty much says it all!

The New York Times has an article on the history of the New York Philharmonic concerts in the park. They started 50 years ago and are going strong.

There's now a word for it: years ago, when I had just played the Villa-Lobos Guitar Concerto with the CBC Vancouver Orchestra, I was talking to a colleague who taught guitar at the local university. He said a student of his had attended the concert and commented that it was "depressingly good". Heh. This is the opposite of schadenfreude, when you feel joy at another's pain. This is feeling pain at someone else's pleasure or triumph. And now we have a word for it: "gluckschmerz", described in this article in the Wall Street Journal.

For your amusement, an unusual photo: 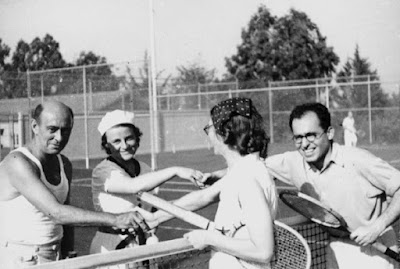 Yes, that fellow on the left, smirking at the camera, is composer Arnold Schoenberg, playing tennis.

Want another one? Here is Dmitri Shostakovich doing shots with Jean Wiener and Darius Milhaud. 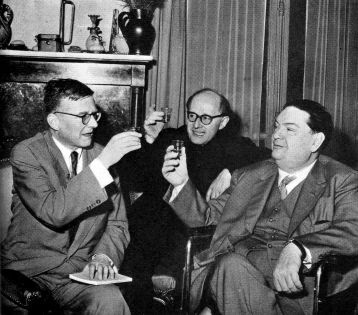 Here is an appropriate envoi for today's miscellanea. The New York Philharmonic conducted by Alan Gilbert playing the 1903 tone poem by Arnold Schoenberg, Pelleas and Melisande:

Posted by Bryan Townsend at 9:14 AM

"Does it make me a misanthrope if I just want to permanently remove myself from the appalling tastes and noises of most of humanity?" No, that has traditionally been considered a blessing to humanity to remove oneself from the noise of humanity, if it is done for the sake of humanity (how that is effected is another question). I, the former student of all things avant garde, have sealed myself in a cave of books on medieval history and Chaucer - but if it makes me a happier person, then maybe the 2 cents I have to offer humanity will be two good cents. (Ok, the philosophers in the room will defeat me in argument, am I getting too close to utilitarianism?) Anyway, I self-identify as a billionaire, but I will give 98% of it to charity. I wonder what the IRS will say.

I was doing it for my benefit, but yes, I can see how it might benefit humanity as well! 8>)

I trust you are reading Thomas Aquinas' Summa Theologica and listening to Guillaume de Machaut?

I think you are still about three syllogisms away from utilitarianism.

And the IRS is too busy hiding emails these days to worry about you.

Heh...no, "The Civilization of the Middle Ages" by Norman F. Cantor, and Dufay (or Boulez or Ornette Coleman). I don't think syllogisms lead to utilitarianism :) I'm more worried about the FBI flying a drone above me and seeing that I'm reading proscribed books (aren't all books proscribed nowadays?) and listening to proscribed music (music by great dead composers doesn't make as much profit as living mediocrities).

Oh no, syllogisms don't lead to utilitarianism, they prevent it!

I think they have found a way to proscribe music without actually banning it: they just remove it from public awareness.