A Note is Just a Note

Composers are very concerned about notation because it is both the record of their creative ideas and the primary conduit of instructions to the performer. The long history of notation is largely a progression from less precise to more precise, but we may have reached a plateau in terms of useful notation. Here are some interesting remarks from composer Kyle Gann:


I complained to the singer I’m working with that some of my composer colleagues insist that virtually every note in a score should be marked with a dynamic and articulation marking – something I refuse to do. She replied: “Oh, I hate it when I feel hemmed in by the composer. I want to look at the notes and think, ‘What do I need to do to bring this line to life?'” That’s why I’m working with her. I would be irritated working with a performer who needed to be spoon-fed every phrase-shape, just as I would be bored writing a piece that sounded the same no matter who performed it.

I am in exactly the same situation these days with a singer I am about to start working with. We are going to record all of my song sequence Songs from the Poets and I have been going over the scores with a fine-toothed comb, proofing and editing. Like Kyle, I tend to not notate every interpretive detail. I notice that the comments to the post are fully in agreement. I talked about this once as the problem of Overdetermined vs Underdetermined several years ago.

The real background to this, what Kyle calls the "Eternal Argument" is actually an ideological one, but with an historical dimension to it. If we look back at the works of people like Bach, Haydn and Mozart, we do not find a forest of dynamics and articulations and phrase marks. For example, here is the opening of Haydn's Symphony No. 39:

There is a minimum of indications apart from the notes themselves: just a single dynamic for each part (piano), some slurs and a couple of staccato dots. To any person familiar with Haydn's style, this is enough. With Bach we get even less: 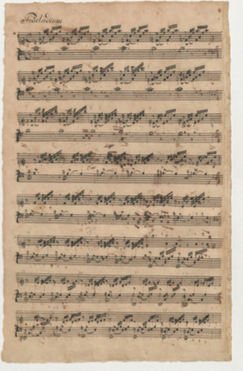 Yes, I know it's terribly fuzzy, but I think you can see that there are no dynamics or articulations or metronome marks, or even a tempo marking.

But, beginning with Beethoven, a lot of what we might call the "style" of a work, the basic ways in which it would be played or "interpreted", began to be manipulated by the composer. Beethoven began to make dynamics a structural aspect of the composition and so had to indicate them pretty precisely. This process continued well into the 20th century as composers more and more needed to construct, not only a particular piece in a particular style, but the style itself, essentially new with every piece. Eventually we ended up with scores that look like this, Structures by Pierre Boulez:

I hope you can see that (click to enlarge) because every single note has a dynamic and an articulation, making for a very dense score. This is essential to the style of this piece, because all these aspects are part of the serialized compositional structure. But, just as this makes for an abstract kind of music, without traditional expressive content from the composer, it also prevents the performers from adding expressive content themselves.

But, for my songs at least, I just don't want to try and predetermine every expressive gesture by the singer. I want the singer to discover the interpretive nuances for herself. As one commentator said on Kyle's post:


To me it seems that if the composer covers the score with markings, they do not trust the performer. As a student conductor said to me years ago, if the performer is in tune with your music, they will play it properly; if they are not, no amount of dynamics or other markings will make them in tune with it.

This being "in tune" with the music is rather a subtle concept, but this is what performers do: they study and work with a piece of music until they understand it, feel it and are comfortable with it. Sometimes they have to learn a new style, but as no musical style is hermetically sealed off from all the others (mind you, there are exceptions!), this is something that performers do as a matter of course.

I'm really looking forward to working on the songs with the singer as I hope we will work out some of the style together.

For the envoi today, I pick the first of Britten's Songs from the Chinese, perhaps the finest set of songs for voice and guitar written in the 20th century: