Béla Bartók is one of the most important composers of the first half of the 20th century and, along with Liszt, one of the two most important Hungarian composers. What does "important" mean, in this context? The prevailing ideology (or "practice" if you want a neutral term) during the first half of the 20th century was modernism, which largely meant innovation in the basic materials and structures of music: melody, harmony and rhythm. Bartók is important because he wrote music that was innovative, but also that was influential on other composers and, most importantly, that resonated with audiences strongly enough that it became widely performed. All this adds up to "important".

Now for some details. Bartók was innovative and original in a number of ways. He developed new notational practices such as extending a beam over a barline to indicate a rhythmic grouping. Here the beams for the piano part extend over the barline between the 3/4 and 2/4 measures to show how the phrase should be grouped:

Another innovation was, in a context of frequent changes of meter, to write the time signatures very large and centered on each group of instruments. That looks like this:

Previously the time signature would only appear on each individual stave; showing them like this makes them much more visible for the conductor (this is only done in the score, obviously).

Bartók also used a lot of very unconventional key signatures in his Mikrokosmos for piano, but we don't see that in this piece, where there are no key signatures. The first movement begins with  low Bs in tympani and piano and ends with a big chord of E, B and F#, so not in C major!

The Wikipedia article on this piece, while giving some historical information, is not too revealing about the music itself. Without doing a lot of research to see if there is any kind of consensus on this, the first movement appears to me to be in sonata-allegro form. It is hard for anyone writing a piano concerto to completely ignore the Mozart concertos.

The piece begins, unusually enough, with the piano and tympani on a B pedal accompanying the orchestra that presents fragments of a theme. The piano then presents it more fully:

Notice the repeated note motif, the shifting time signature and the scale passages with chromatic interpolations. Later there is an important anapest motif in the winds. In this example, in dialogue with the piano, note the beams crossing over the barlines:

(An anapest, taken from prosody terminology, is a rhythmic figure with two short notes followed by a longer one.)

To end sections, Bartók uses this vamping figure instead of a conventional cadence:

This new theme appears, related to the anapest motif:

Then, in a different tempo, we have this theme, presented in the piano:

These themes are then given a development and here is a fairly typical page: 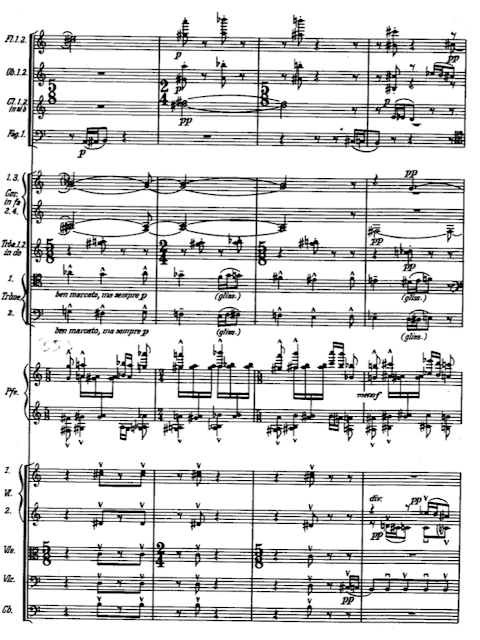 As you can see, this concerto is pretty challenging for everyone: the pianist, the orchestra and the conductor.

After this, I hear something resembling a recapitulation and then the first movement ends with an abbreviated version of that cadence figure, using the same notes.

Bartók's method seems to be to use the broad structural outlines of classical forms, but to fill them with entirely different material: much more dissonant and metrically complex. His music has an intense expressivity that is very compelling, which probably accounts for a lot of his enduring popularity.

Now let's listen to the whole piece. This is the French pianist Jean-Efflam Bavouzet with the London Philharmonic Orchestra conducted by Vladimir Jurowski:

Far better concerto than Bartok's Violin Concerto No. 1. It has lovely themes and a quite primitivistic vibe. It actually reminds me of The Rite of Spring at some points. The percussive use of the piano and other instruments is wonderful. The first movement is very intense and energetic but the second movement has an interesting air of mystery to it (it's very atmospheric). The third movement is probably more energetic than the first but also more dissonant.

Oh yes, certainly. The Bartók piano concertos are some of the most popular of the 20th century.