A Discourse of Adepts

Via Ann Althouse I come across a piece in the New Yorker about German painter Albert Oehlen whom they call "the foremost painter of the era that has seen painting decline as the chief medium of new art." Here is an image from the article:

They say that, "His pictures possess no unity of composition, only unremitting energy." I was particularly interested in this quote, from which I drew my title:


He shrugs off appealing to anyone who doesn’t really—even helplessly—like painting, fulfilling a prophecy made years ago by the critic Dave Hickey: “Painting isn’t dead except as a major art. From now on it will be a discourse of adepts, like jazz.”

"A discourse of adepts, like jazz." Hmm, well I wonder about that. I notice that one place you might find such a discourse is in the detective novels of Michael Connelly that feature the character Harry Bosch who both plays and is an avid listener to jazz. Both books I have read recently have long passages in which Bosch is listening to and commenting on some outstanding jazz musician or another. But there is never any technical vocabulary and indeed, he wanders into non-adept territory, making me suspect that Connelly himself is not really an "adept". For example, he talks about a bass player not being a mere "sideman" because he "drives the beat". This is, of course, what bass players, along with drummers, do. They are the rhythm section so of course they drive the beat. But the actual definition of sidemen, which Connelly seems to use to mean, "mere accompanists", is musicians hired to perform or record with groups of which they are not regular members. So I am afraid that Connelly is probably not an adept, though I'm sure he fools most readers.

Jazz does, like classical music, have real adepts who include all those who actually play the music well and those who have an adept's knowledge of the music. But these people are vanishingly few these days and often do not include those who write professionally about the arts. I even wonder a bit about Peter Schjeldahl, the author of the New Yorker piece. There is nothing in his brief bio indicating whether he has had any actual training in the arts.

He says, for example that Oehlen's paintings possess no unity of composition. There are two photos of his paintings in the article so let's have a look at them. My training in the visual arts consists of no more than auditing a couple of lectures on architecture and reading Paul Johnson's Art: A New History and Munroe Beardsley's Aesthetics: Problems in the Philosophy of Criticism. But to me it is obvious that the above painting most certainly has some unity of composition, even if it is a bit concealed. Have a look at the shades of yellow: the large cloud of pale yellow on the upper left, the more intense yellow in the upper right, the hazy patches of yellow in the center, the yellow band on the lower right and at the bottom center and finally the orange-yellow block in the upper left center. Don't these act as a unifying element? There are lots of other colors, of course, and a wealth of textures, but yellow is the element that brings the painting together: at least to my eye. The other painting in the article is this one: 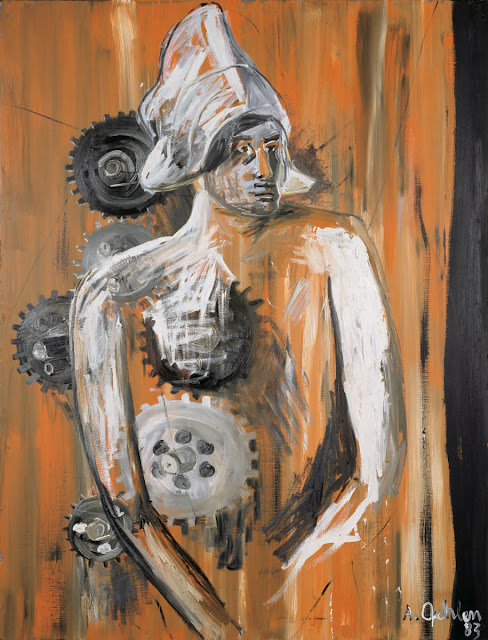 The unity of composition of this painting is perfectly obvious: there are three main hues: black, white and orange and they are present throughout. Apart from the human figure, the other image is of sprockets--and that's it. It is a very unified composition.

So I'm starting to wonder: perhaps it isn't painting that is, as a major art, "dead", but writing about it?

I think it was Michael Crichton who commented that if you have knowledge of some professional specialty, every time you see something in the mass media about that area, you will notice that 90% of what they say is wrong. But for some odd reason, you go on believing what they say about things like foreign affairs or economics, things that are not your specialty.

So if you follow that argument to its absurd conclusion you will have to accept that the major arts of our time are represented by figures like Beyoncé and Thomas Kinkaid: 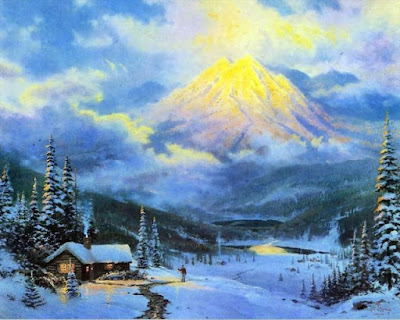 Forgive my wandering out of music criticism and into art criticism and please correct my errors in the comments!
Posted by Bryan Townsend at 9:23 AM

The structural thing I also notice about both those paintings is that they both largely follow the rule of thirds in their composition.

The first and more abstract painting is a little harder to see but there are very strong lines, points of interest and foreground transitional elements all occurring on or quite close to the "rule of thirds grid"....especially the "cloud" like elements at the intersections that create a lot implied depth to the image itself. It is like you are looking into the image through a window.

(It also has some colour complimentary pairings going on with the yellow/green and red/blue pairings.)


The human figure, even though centred, has those cogs smack bang along the left most vertical division which adds a strong weighting to that side. This helps to emphasise more empty space figure is facing.

I sincerely doubt this is accidental so it does seem a little silly to suggest that it lacks unity.

Glad to see I am not off-base here. Thanks, Nathaniel.

I go on holiday from the online world occasionally, and am happy to see, on return, that the good and thoughtful writers have kept at it; thanks! Oregon Bach Festival begins with Haydn's Creation tonight, Part's Passio on Sunday.

Now that makes me want to visit Oregon! That and that famous bookstore. Is it Powell's?

Powell's it is. I don't get up there often enough but their online store is efficient and user-friendly.

Where is the Oregon Bach Festival held?

Here in Eugene, although some events are also performed in Portland etc.