One of the more surprising developments in 20th century music was the renewed attention paid to the concerto form. Earlier concerto composers, like Vivaldi with over 500, were very prolific. Both Bach and Mozart wrote a remarkable number of extremely fine concertos. So did Beethoven, but he also initiated some trends that echoed through the 19th century. By the end, major composers like Brahms were writing a single, very long, violin concerto, like Beethoven instead of several like Bach and Mozart. Brahms, a pianist, only wrote two for his own instrument while Beethoven wrote five and Mozart, not counting arrangements from J. C. Bach, wrote twenty-three! Even Franz Liszt, probably the greatest piano virtuoso of the 19th century only wrote three for his instrument.

So while some composers, like Sibelius whose Violin Concerto we discussed two weeks ago, continued to write just one violin concerto, most 20th century composers wrote at least two, even though it was not their instrument. And the piano concerto flourished with multiple ones by Bartók, Prokofiev, Shostakovich and even Stravinsky.

If I were to speculate, I would propose that the existential stresses of the 20th century found an appropriate vehicle in the concerto for solo instrument and orchestra. If you feel that you as an individual are surrounded by hostile and implacable forces (and frankly, for a lot of the 20th century, this was simply true), then the solo concerto might be the ideal medium to express this. In the 19th century, the solo concerto, like the symphony, expressed the aspirations and ideals of the mass audience of the bourgeoisie. Carl Dahlhaus mentions the strange restoration of the string quartet in the 20th century and I see something similar in the concerto which gained a new lease on life as the alienation of the individual vs the mass became a keen social and metaphysical theme in the 20th century. [Dahlhaus, Nineteenth-Century Music, p. 28] Mind you, the 20th century concerto, like its 19th century predecessors, did not lack in virtuosity. In fact, the one we are going to look at today is famously one of the most challenging ever written.

The Piano Concerto No. 2 by Prokofiev, completed in 1913, was dedicated to a friend who had recently committed suicide. It has a very original and compelling opening, quiet, but with the feeling of the calm before the storm: 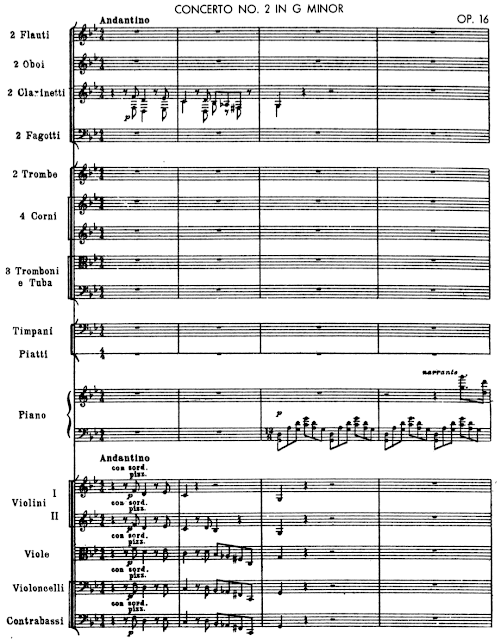 What a contrast with the typical 19th century piano concerto, whose opening usually features the piano, fortissimo, in a very virtuoso passage. The narrante indication in the piano part is interesting. It means "narratively" as if you are telling a story. This hearkens back a bit to the Ballades of Chopin that have a similar feel, though it is new in a concerto context. Here is how that theme continues, accompanied by pianissimo strings:

The allegretto arrives and the orchestra has still not had a strong tutti. The piano again has all the thematic material:

The opening andantino returns, setting up the piano cadenza and still the orchestra has not come to the fore. What the orchestra has done is provided an often eerie context for the piano, accompanying with variant textures as a kind of landscape over which the piano moves.

Here is some of the piano cadenza, near the opening and notated on three staves:

And as the cadenza continues, the texture gets even more complex and virtuosic:

This cadenza, which starts at the six minute mark in the clip I am about to play, goes on for four minutes! This is a new thing in 20th century concertos and sometimes, as in the Violin Concerto No. 1 by Shostakovich and the Guitar Concerto by Villa-Lobos, the cadenza becomes a separate movement.

Finally, as the orchestra returns at the end of the cadenza, we get a full-blooded tutti: 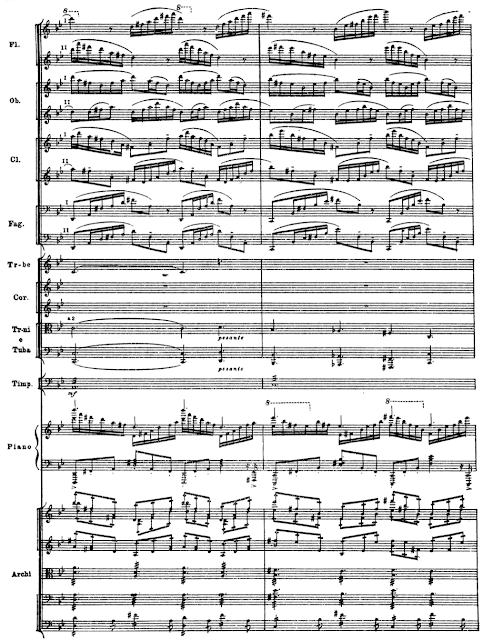 And what a tutti! Unleashing the brass section, fortissimo, gives an enormous weight to this, the climax of the movement. All that is left is a brief coda in which the opening theme is recapitulated. The movement ends piano. Those three pages of fortissimo at the end of the cadenza constitute the only orchestral tutti in the whole movement.

The Scherzo, vivace is a whirlwind of never-stopping sixteenth notes in the piano with, again, the orchestra in a largely subsidiary role. The Intermezzo (this is a four movement concerto) is Prokofiev at his most Russian. The heavy and dolorous march is a perfect foil to the eerie first movement and the scintillating second. This is also the first chance that the percussion section get to do much.

The piano contributes some hurtling decorations:

but in this movement, the orchestra gets an equal share of the material: 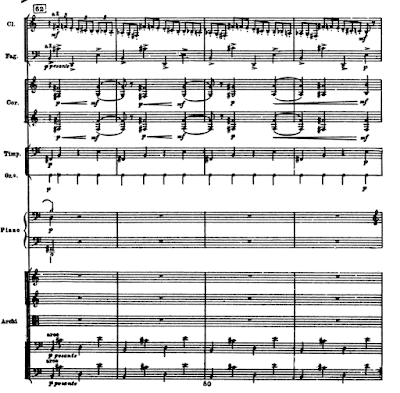 The finale, Allegro tempestoso is just as tempestuous as you might expect: 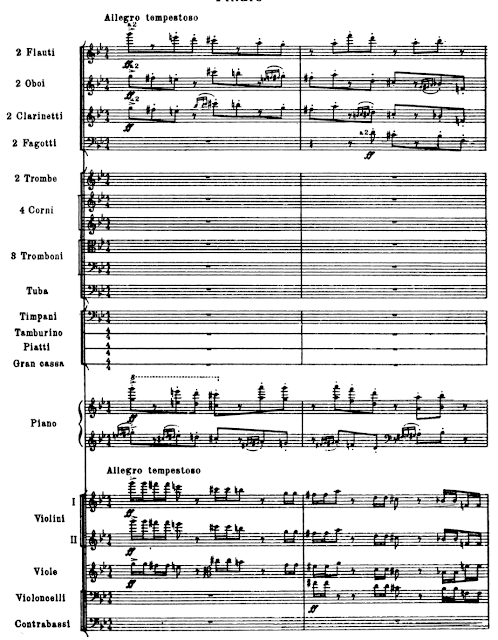 But please, place no credence in the very odd commentary on this movement in the Wikipedia article. Trust me, composers do not write passages in 4/4 that are to be played in 7/8:


Five octaves above the intermezzo's end note, a fortissimo tirade pounces out of the sky, written in four-four-time but played in seven-eight (one-two-three-four-one-two-three etc.).

Who writes this stuff? The syncopation in the strings is not matched in the winds or piano, which is why it is properly notated in 4/4.

And that's all I want to say about this concerto. It has been one of my favorite concertos since a composer friend of mine lent me a box of all the Prokofiev piano concertos, oh, decades ago. Here is Yuja Wang doing a terrific job of it. The Verbier Festival Orchestra is conducted by Charles Dutoit:

The first movement is haunting indeed. As it progresses it gets more and more dissonant but also more and more intense. Yes a very satisfying tutti and recapitulation of the opening theme. The scherzo is very fast and flies by. The march has a quite interesting character. The fourth movement is tempestuous indeed. I mostly enjoyed the haunting theme that starts at 22:10 and permeates the movement until 29:48.

Overall I think all of Prokofiev's concertos are very interesting. I've listened to them a couple of months back. I think that another Prokofiev Piano Concerto is my favorite. I don't remember which one it was.

Yes, I am quite impressed with the Prokofiev concertos. I might do the 5th Piano as well.

Regarding Wikipedia they have very odd rules of editing which make inputting ridiculous statements easy and removing them difficult. The idea is you are not to do original research as they put it but simply base your commentary on established published sources and cite them. But of course someone can quote any ridiculous statement as long as someone somewhere uttered it. Now a reviser is stuck because to delete it you can't simply point out that the statement is ridiculous. You have to find a source that says the correct thing and rewrite it. But then an editor can come along and delete your revision even if sourced because it deleted another editor's work. The only surefire way is to find another published source which specifically rejects the bogus statement. So how much time do you have to correct Wikipedia? The discography site Discogs has a similar problem.

Surprisingly, most of the time I find Wikipedia to be pretty good on classical music. This is an occasional exception. I once wrote a fairly substantial article on guitar repertoire but discovered that over time, others came along and messed it up beyond recognition. I won't do that again! At least here, I have control over what gets posted.