The development of harmony in the 19th century, at least as it concerns third relationships, is a bit under-recognized in theory texts, which tend to focus on harmonic functionality. Some 19th century harmony extends functionality to the point where it becomes color rather than function. For example, the idea of dividing the octave into equal parts adds a great deal of chromatic color, but dilutes the functionality of the dominant. Typical symmetrical divisions are the tritone and the minor third. The latter comes from extending the use of the º7 chord. Here are some examples from the standard text, Harmony and Voice-Leading, Third Edition, Aldwell and Schachter:


Of course, if you are dividing up the octave in minor thirds, you are likely to find yourself using the octatonic scale, which just takes it one step further: 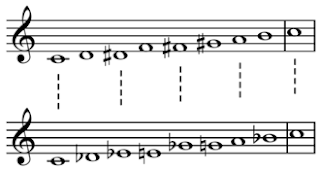 Each pair of intervals in the scale spans a minor third. So we can find isolated examples of the octatonic scale in a lot of 19th century music. There are examples in Schumann, Chopin, Liszt and Rimsky-Korsakov. But it was only the latter who cultivated it for its own sake and passed the practice on to his students, Stravinsky especially.

There are also some examples of use of the whole-tone scale, before Debussy. It is used as the leitmotif of the sorcerer Chernomor in the opera Ruslan and Lyudmila by Glinka. In general, Russian composers tended to make symmetrical third relations more explicit than in Western composers. Rimsky-Korsakov in particular approached the whole area with his characteristic clarity and orderliness. For him it was a bulwark against the "sea of decadence" that he saw in the wayward chromaticism of, for example, French music--he called this "d'Indism."

What Rimsky-Korsakov passed on to his students was a "set of operations, of routines and techniques, stemming from an outlook on the total chromatic that was heavily prejudiced in favor of symmetrical partitions of the octave." [Taruskin, Stravinsky, p 272] Though all axes of symmetry were possible, the chromatic scale itself, whole-tone, minor thirds, major thirds and the tritone, in practice the one that was most widely exploited was the minor third which contains the tritone and outlines the octatonic scale. The octatonic scale also provided many ways of interacting with traditional diatonicism. What is very cool about this is that you can create harmonic structures of seemingly traditional major and minor triads that seem "without tonal motivation." [Taruskin, op. cit. p. 273, quoting a review by Elliott Antokoletz of The Music of Igor Stravinsky by Pieter C. van den Toon.] Rimsky-Korsakov was well aware of this as can be seen in his sketchbooks. Taruskin offers this summary showing how the octatonic scale can be used to generate triads: 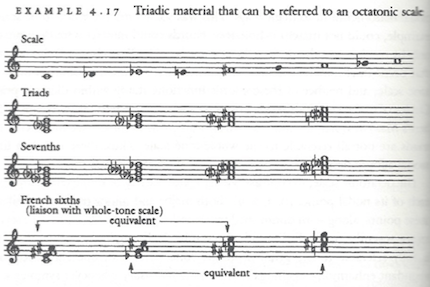 And here is an excerpt from one of his sketchbooks showing the harmonisation of ascending minor thirds:

If I am losing you here, the thing to remember is that Rimsky-Korsakov developed and passed on to Stravinsky a harmonic method that was both based on an underlying theory, and offered a fresh kind of sonority.

Finally, let's tie this theory to actual music. In the introduction to Act 1, scene ii of Rimsky-Korsakov's opera Sadko, virtually every note is traceable to the harmonic complexes in the Example 4.17 above. The only exceptions (shown in circles below) are chromatic passing notes. The passage ends with an authentic cadence in C major, preparing the entrance of Sadko--and this demonstrates the compatibility of octatonic harmonies with traditional ones! 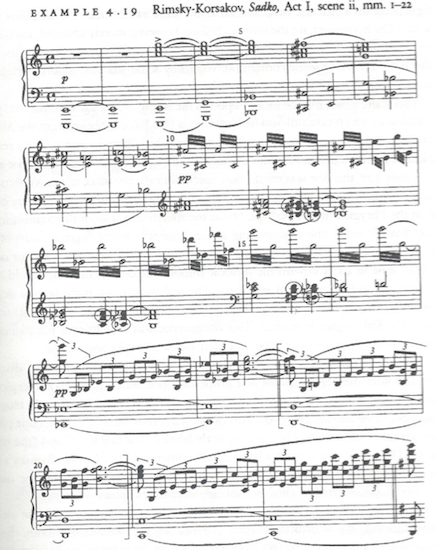 Let's end with a clip of that passage from the opera.

For him it was a bulwark against the "sea of decadence" that he saw in the wayward chromaticism of, for example, French music--he called this "d'Indism."

Ha! Now that is a deep cut, Rimsky Korsakov takes exception to the chromaticism of D'Indy!! I love it, what a villain! I regularly play with a string sextet, and D'Indy is one of those handful of composers who saw fit to write one. We haven't read it yet, but I may have to press the issue.

thank you for the informative post, I note how along with the innovations, the composers immediately recognize that emphasis on coloristic harmonies involves a loosening of the functional aspect.

Jives, thanks so much for the comment. I know that these Stravinsky posts are getting rather technical and I'm glad that some are following them.

Well "following" might be too strong a word to describe my reading here, but I am reading these posts on technical analysis of harmonies in Stravinsky and Rimsky-Korsakov, composers I know and love. Bryan these articles provide a nice "over my head but reaching high" upper echelon of where it all leads as I simultaneously take free Coursera courses on music theory, and in these past few days I'm learning some rudiments about functional harmony in terms of building and resolving tension. Now that I have just got my new lira da braccio, a renaissance-era instrument mostly for chordal improvisations to accompany the singing of poetry, I finally intend to make a half-serious (I do work full time and have a son to raise) study of chords and harmony and modal composition so I can start playing that lira to sung melodies I make up for poems of mine own hand and of 16th and 17th century poets.

Congratulations on your new instrument! I think you are a bit of a hero of mine as someone who pursues aesthetic goals entirely out of passion.