The Mountain to Mohammad

The origin of the phrase "If the mountain will not come to Muhammad, then Muhammad must go to the mountain" is in a slight misquotation of a passage from Francis Bacon's essays. It gives us a bit of perspective on the trend towards taking classical ensembles out of their usual environments and putting them in unusual ones like subway stations, clubs, and chapels. There is an article outlining the success of these efforts in the Independent:

In 2013-14, we saw a 54 per cent increase in new attenders to see our chamber orchestra, Manchester Camerata, compared to the previous season. We have a restless ambition to redefine what an orchestra can do. We’re constantly challenging how we engage with audiences – so if that means we perform in a grand concert hall one day, and a car park the next, so be it.
Like any big city, there’s a real wealth of performance spaces in Manchester – clubs and bars, chapels and cathedrals, impressive concert halls and everything in between. We’ve found that by performing in venues like Gorilla Bar or the Royal Exchange Theatre, we’re cultivating a new audience for our work – taking the music to them, rather than expecting them to come to us.

This seems like a real success--read the whole article for more details. These days you have to applaud any strategy that increases attendance by 54%! My own experience with unconventional venues was also mostly positive. I once toured around in Italy playing outdoor concerts in plazas including the Piazza Signoria in Florence, bordered on one side by the famous Uffizi Gallery, and it was a wonderful experience. The audiences were numerous and enthusiastic and there was absolutely no question that they were there solely for the music as they could walk away at any time.

But I want to look at some of the history here. The idea of a performing space designed specifically for the presentation of concerts of classical music was one that originated in the late 18th century. As the patrons of classical music at that time were either members of the nobility or the Church, the two options were either a private concert space, a "chamber" in a private residence, hence the name "chamber music" or, of course, a church. Churches do have elements that are specifically included for the presentation of music--mostly things like choir stalls and organs and some churches like the San Marco in Venice have multiple choir stalls which led to pieces by the Gabriellis and Vivaldi for multiple ensembles, but most of church design is for worship, not music specifically. Members of the nobility who were particularly fond of music, like Prince Nikolaus Esterházy and Frederick the Great, would have specific rooms for playing and listening to music in their palace residences. Here is a portrait of Frederick the Great playing the flute in a concert at his palace Sansouci at Potsdam. His composer in residence, C. P. E. Bach is at the harpsichord:


Here is a photo of the large music room at the Esterházy palace where Haydn's symphonies were premiered: 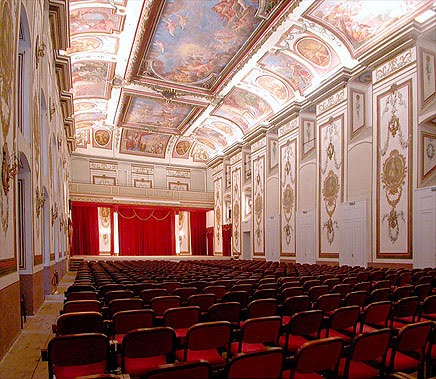 As you can see, nobility who loved music did not hesitate to provide a spectacular setting for its performance.

The public concert began a few decades into the development of the dynamic and popular Classical style. In the 1780s Mozart typically gave a series of concerts during Lent in Vienna in which he premiered his piano concertos:

Mozart arranged for his Lenten concerts of 1784 to be given at a salon in the residence of the court printer and publisher, Johann Thomas von Trattner (Frau Therese von Trattner was a piano student of Mozart and the dedicatee of the Sonata and Fantasia in C minor, K. 457 and 475), on the last three Wednesdays of the season — March 17th, 24th and 31st — and he was overjoyed to have as subscribers 174 the most genteel representatives of the Austrian aristocracy, the worlds of finance, government and scholarship, foreign diplomats and other wealthy patrons of music.

Given in a private salon because there was not yet a public concert hall in Vienna! Also, notice the size of the audience: 174 people. For comparison, the typical audience in Prince Nikolaus' hall for a Haydn symphony would have been much smaller: ten or twelve perhaps, or smaller than the orchestra itself, which numbered 16 to 20 in the early days. A generation later Beethoven would premiere a symphony in the Karthnerthor Theater which was the lower-class German language theater in Vienna, still it could hold a much larger audience than any private salon.

In the 19th century the audience for classical music increased a hundredfold and this sparked the construction of halls designed specifically for the public performance of both chamber and orchestral music. One of the earliest was the Hanover Square Rooms in London where Haydn's music was performed during his London visits in the 1790s: 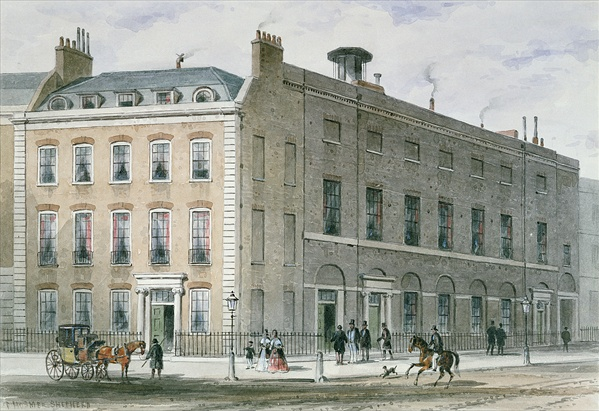 I recall reading somewhere that the large hall could hold perhaps 800 listeners. The first real concert hall in Germany was the Leipzig Gewandhaus, built in 1781. Only in 1831 did Vienna acquire its own designated concert hall, built by the private association of music-lovers the Gesellschaft der Musicfreunde. Most urban centers followed suit and by the end of the century concert halls had grown to seat 2,000 or more listeners. This, along with the growth of subscription series and the immense growth of both music publishing and the purchase of pianos for middle-class homes, was the economic base that supported the enormous 19th century orchestra and the enormously long symphonies written for them.

The 19th century was the century of music. Music was the chosen avenue for the expression of the emotional life of the middle class and so it was given special halls--temples, almost--in which music could be listened to in comfort and concentration. This trend continued well into the 20th century with newer centers of musical life being built like Lincoln Center in New York, Place des Arts in Montreal and so on.

But now the emotional life of the middle class is more to be found in yoga classes and their smartphones I suspect. The concert hall is no longer the center of things and so smart organizations like the Manchester Camerata (part of whose name, ironically, dates back to the private club of aesthetes in Florence in the late 16th century) go to the audience. The mountain does indeed go to Mohammad.

Posted by Bryan Townsend at 8:44 AM

Hi Bryan,
Picking up on a single thread from this entry, “But now the emotional life of the middle class is more to be found in yoga classes and their smart phones I suspect”.
I agree, and would also add that it is interesting how much music is on those smart phones and in those yoga classes. It seems to me that people are still as emotionally involved with music as ever, especially recorded music. But as you say, music does not seem to be an “avenue of expression”, in the way that a certain smart phone or fitness regime is now seen as “expressing” who we are.
Listening to a musical performance seems downright communal compared to going to the gym for a workout. I wonder if other inherently social functions of the 19th Century have suffered the same decline as the concert-hall.
I love the picture of Fredrick the Great. It’s difficult to imagine a world in which political leaders stayed up into the night playing music with some of the great musicians of their time!

You are quite right, it seems as if a lot of the experience of music has moved from the communal to the private. And people are still emotionally involved with their music--good point. I don't like listening to music on my smartphone, so I tend to forget that lots of people do. I think I made the point somewhere that listening to a Bach oratorio in a church, or a Beethoven symphony in a concert hall has an almost sacred aspect (certainly so in the case of the Bach). It is a kind of communal worship of some kind of transcendence. But the situation now is that music tends to be used more as the soundtrack to our inner lives--kind of a melodrama. Instead of us entering into it, it accompanies us.

Yes, with the possible exception of Condoleezza Rice, hard to imagine any political leader of our day playing chamber music in the evening!