Music writing then and now

Music writing now is pretty much like it has been for a hundred years or more. Possibly the most well-known music critic in the English-speaking world today is Alex Ross. A hundred years ago it was probably George Bernard Shaw. They do have a few things in common. Both being prominent in their professions, they are given the benefit of lots of space. Alex Ross' latest essay in The New Yorker on recent books on Beethoven runs close to five thousand words! In 1893, in The World, George Bernard Shaw published a similarly lengthy essay on several recent concerts, including one of Brahms' chamber music. What similarities do we see? As they are both writing journalism, there is a great deal of blather and a minimum of technical detail.

Ross begins with a number of gestures in the direction of what are the currently fashionable ways to look at music:

After Beethoven, the concert hall came to be seen not as a venue for diverse, meandering entertainments but as an austere memorial to artistic majesty. Listening underwent a fundamental change. To follow Beethoven’s dense, driving narratives, one had to lean forward and pay close attention. The musicians’ platform became the stage of an invisible drama, the temple of a sonic revelation.
Above all, Beethoven shaped the identity of what came to be known as classical music. In the course of the nineteenth century, dead composers began to crowd out the living on concert programs, and a canon of masterpieces materialized, with Beethoven front and center. As the scholar William Weber has established, this fetishizing of the past can be tracked with mathematical precision, as a rising line on a graph: in Leipzig, the percentage of works by deceased composers went from eleven per cent in 1782 to seventy-six per cent in 1870. Weber sees an 1807 Leipzig performance of Beethoven’s Third Symphony, the titanic, turbulent “Eroica,” as a turning point: the work was brought back a week later, “by demand,” taking a place of honor at the end of the program.

George Bernard Shaw begins with a statement of offhand elitism that would fit quite well with the way that his audience, upper-class Englishmen, viewed the world: 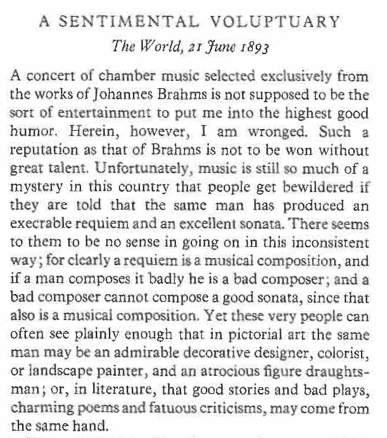 I think in the case of both writers, one of the crucial elements, coming far before engaging with the music in any detail, is flattery of the reader. Both are writing for people of high cultural station. The easiest way to flatter the reader, when talking about someone of the stature of a great composer like Beethoven or Brahms, is to relate their foibles, their ordinary humanness to bring them down, not to the reader's level, but just slightly below! Ross does it through health and psychology, themes our time is obsessed with:

Throughout the book, we register, in our mind’s ear, Beethoven ranting, grumbling, pestering, pontificating, leering, sneering, and, above all, complaining. Especially in his final years, Beethoven was in constant misery, some of it ordained by fate and some of it self-imposed. Heavy drinking compounded other health problems and, Swafford argues, proved fatal. (The theory that the composer died of lead poisoning, publicized in the 2001 book “Beethoven’s Hair,” has been undermined by further testing of his remains.) In Friedman’s novel, doctors ask about blood in the stool and the quality of his urine. There is squabbling over money, and an almost total lack of serenity.

Shaw goes about it in a different way. As it would have been unseemly to a late Victorian to talk about Brahms' drinking problem, he does it by way of taking a superior attitude to the music itself: 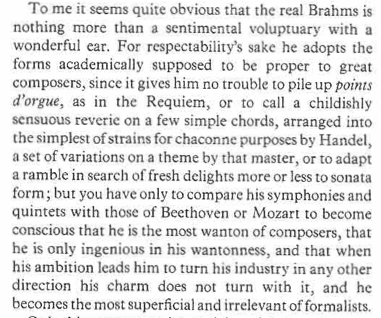 My point here is not the truth or falsity of these characterizations--they certainly carry more weight if they are true--but rather the function of them, what the writer uses them for. In both cases, I think it is to flatter his readers. This is, of course, what distinguishes musical journalism from musical criticism.

Now there was, of course, real music criticism a hundred years ago, just as there is now. It is not likely to be found in high-profile magazines catering to the carriage trade, however. A hundred years ago it was found in the program notes and Encyclopedia Brittanica articles of Donald Francis Tovey a musicologist, conductor and composer. Here are a couple of samples of his writing:

What both these excerpts reveal is a kind of profound respect for the art and those who create it. There is no hint of a need to flatter the reader by reductionist tactics. There are writers on music today that share this attitude and I'm sure I have mentioned them before. One is Charles Rosen who writes about how a young Mozart invented the structure of the Classical era concerto in this excerpt:

Yes, Mozart at age fifteen had the kind of command of musical structure to do this. Let's listen to those very early Mozart piano concertos, based on solo piano sonatas of J. C. Bach. Here are all three concertos, K. 107: