...well, yesterday, actually, April 4, 1964, that The Beatles occupied the first five places on Billboard's Hot 100 list of popular songs. They are the only artists to have ever done this. The closest anyone else has come is, according to the article, 50 Cent, with three songs in the top five in 2005. Here are those five songs:


The Beatles were a real anomaly in the history of music. Immensely popular masters of the popular genre like many before and since, but they managed to transcend the genre (or genres, actually) to create their own unique pieces of music that no-one else has come close to equalling. Genre artists, almost without exception, remain genre artists. Masters they may be, but they don't stray far from the boundaries of their style. The musicians I was talking about the other day, Taraf de Haïdouks, are masters of their genre, but, while they did an album of classical music, it was all related to the styles they know and their interpretation consisted in "re-gypsyfying"the music.

Masters of the blues like B. B. King, Eric Clapton and Stevie Ray Vaughan usually stayed close to their roots.

But The Beatles are an anomaly... If you listen to one of those songs listed above, like this one:

you should conclude that it is an outstanding pop song of its day. It is actually even better than that. Unlike nearly all of the other pop songs of fifty years ago, not one Beatles' album has ever gone out of print, not even the first: 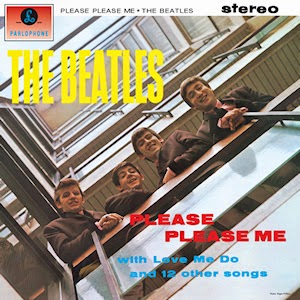 But much more remarkable than that is how their musical "language" progressed. There were two ways this happened. First of all, they widened their writing to encompass more and more genres, some of which we don't have names for. There was Latin:

It is ironic to notice that one of the reasons they explored various genres was to be sure not to miss out on the Next Big Thing. Then at some point they must have realized that they were the next big thing.

This brings up the second way in which they were so anomalous: they created and kept developing an entirely new way of approaching song-writing and produced uncategorizable pieces like this:

So that feat, capturing all of the top five places in the Billboard list, is really the least of their accomplishments...
Posted by Bryan Townsend at 8:10 AM

Email ThisBlogThis!Share to TwitterShare to FacebookShare to Pinterest
Labels: The Beatles