Sorry I didn't put up a post yesterday--these things happen! So let's see what is shaking in the world of music today.

First up, from the Annals of the Weird, an airline actually seemed to care that they damaged a guitar!! I know, it is hard to believe, but Norman Lebrecht has the details. 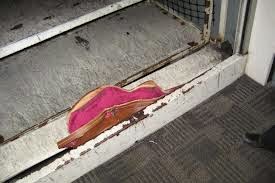 Ok, I'm not the only music blogger with a sense of humor. Here are the top ten music schools, according to one blogger.

This year's Pulitzer Prize in music has been awarded to John Luther Adams for his piece Become Ocean. It's not on YouTube, but here is an older piece called Dark Waves for orchestra:


It sounds just a bit like Sibelius, getting mugged, on the beach, at dawn, by Steve Reich--which is actually kind of interesting... John Luther Adams is not a composer I know, but I will certainly seek out his music in the future.

Here is an interview with the always-perplexing Dutch composer Louis Andriessen. I mean how can you be a fan of Janet Jackson and dislike the Beatles?

Here is some more weird news: young people are into buying cassette tapes purely as collectibles and then not playing them. Here is the story from the BBC. Apparently the group Haim are among those releasing music on physical media in reaction to the trend towards digital only purchases.

Here is another article about experiments with repetition in music. On the one hand, I think it demonstrates yet again some of the reasons why the avant-garde in music did not ever achieve much popularity (not that that was the goal), but on the other hand, it might also be demonstrating the decline in culture that has been going on for decades now. Or maybe both!

Here is a poll from CBS/Vanity Fair with all sorts of interesting little bits of information. Most people listen to music over the radio? The two ways I listen to music the most often, with a CD player and computer, are the least used by most people at 1% and 6% respectively while 49% listen most to the radio. The last time I listened to the radio, it was at least twenty years ago and only because they were broadcasting a concert of mine! Ok, now here is a weird statistic. Here is how people responded when asked which musical artist you would want your child to study: 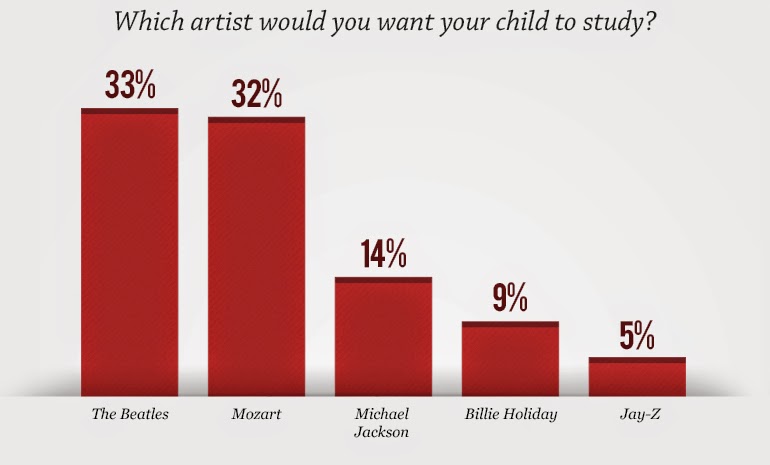 The Beatles, not too surprising, Mozart, ok, but Michael Jackson? Ok, he is the king of pop, I guess. Jay-Z because you should learn how to get rich with music. But the one I can't figure out is Billie Holiday. Sure, great blues singer, but huh?

However, 42%, a plurality, declare that this decade has the worst music ever. The people cannot be wrong! They also declare that the sexiest instrument to play is the guitar, so, pretty accurate study. Heh.


And for a light-hearted finale, here are some string players that have an unusual stage presence:

Posted by Bryan Townsend at 6:59 AM