I got back from Toronto last night so I can give a bit of an update on the project. First some background: over the last few years I had developed a good working relationship with a recording engineer down here in Mexico. Ken Basman was originally from Toronto and was an outstanding jazz guitarist. He was also a very talented recording engineer with his own studio and an impressive collection of microphones. Sadly, he passed away a couple of years ago so I have been looking for an alternative. I just completed a piece for violin and guitar, Dark Dream, and there was another piece for violin and piano that also needed recording so I approached violinist Valerie Li, first violin with the Afiara Quartet whom I had met when they gave a number of concerts here in Mexico. She was interesting in recording the pieces with me and knew a very good recording engineer in Toronto. As Toronto is also home to some fine pianists, that made the project feasible. I just had to fly up to Toronto in December when the daytime high is often around zero! Never mind, just dress warmly.

The project was a real success. We recorded in the Glenn Gould Studio, a small concert hall in the CBC broadcast centre that is outfitted as probably the finest studio for recording classical music in Canada. We recorded two pieces, Dark Dream, which I just completed a couple of months ago, and Chase, composed three years ago. I flew into Toronto last Wednesday, getting in at 1:30 in the morning. At noon the next day I had a rehearsal with Val which was our first run-through of the piece. As she is a highly accomplished chamber music musician it went very smoothly and we largely worked out the ensemble problems. The next day I attended the rehearsal of Val with pianist Todd Yaniw for the much shorter piece, Chase. That went quite well, though I was not impressed with the beat up piano at the Conservatory. Saturday Val and I had another rehearsal of Dark Dream and Sunday we recorded both pieces at the CBC. Total rehearsal time Dark Dream: 3 1/2 hours and Chase, 1 1/2 hours. Total recording time: Dark Dream, 2 hours and Chase 1 1/2 hours. Dark Dream turned out to be about 14 minutes long and Chase about 4 minutes. I expected Dark Dream to come in at ten minutes as that is how it was originally planned. However, I rewrote the piece three or four times so it just grew!

Here is a look at the Glenn Gould Studio, named after perhaps Canada's most famous classical musician, pianist Glenn Gould who was pretty much resident in the CBC building for much of his career:


Inside the control room: 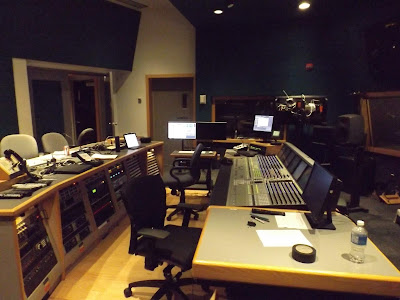 Our recording crew, Paul, technical assistant from the CBC, Pouya Hamidi, our recording engineer, and pianist Todd Yaniw. I believe that Pouya is performing a traditional invocation of the gods of recording for a successful session. 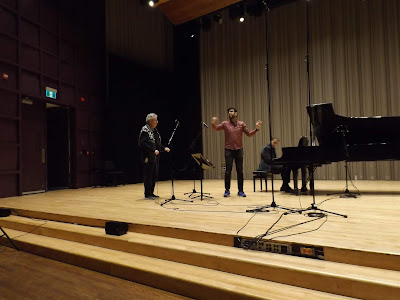 Myself, Pouya and violinist Valerie Li, getting ready to do a take: 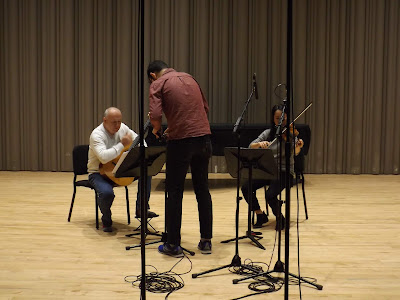 I will have more about the actual recording in future posts.

While the recording itself went very well, there were a few unexpected challenges. As I said in a previous post, I completely forgot my charging cables for my iPhone, my Chromebook and my Kindle. They were all charged up when I left so it was not a complete disaster. In fact, the Kindle lasted the whole trip. Val had a spare iPhone charger, so that helped. But the Chromebook only lasted the whole time due to stringent rationing! I was going to do a lot more blog posting and maybe watch a few shows on Netflix, but had to keep the usage to an hour or two a day. It turned out that the Chromebook, advertised as having up to 12 hours of battery time, actually delivered about that much. However, taking an Uber to the Royal Conservatory for a rehearsal, my iPhone slipped out of my jacket pocket in the back of the cab. It took several days of phone calls and a significant tip to get the phone back. Luckily, I did! But my recommendation is to NEVER leave anything in an Uber.

On the plus side, I discovered a really good sushi restaurant near my hotel.
Posted by Bryan Townsend at 7:15 AM

For some reason, a few nights ago I started browsing through recordings of your work you have up on this blog. I particularly enjoyed Songs from the Poets -- I loved 'Goe and Catch a Falling Starre' with its ingenious harmonies and beautiful ending.

So thoroughly looking forward to hearing the new pieces!

That is exactly the kind of thing I love to hear! Thanks, Steven. I will have a lot more on the new recordings soon.

Congratulations Bryan on completing this composition and recording project! I will be very interested in hearing it. I love your "Four Pieces for Violin and Guitar," and sometimes I also see the disc out when I visit a friend who is a pianist and very serious about classical music. BTW, I was going to include a link here to your 4 Pieces where I bought it at Avondale Press, but they seem to have disappeared, referring me to the website of the Canadian Music Centre where I found you listed but no info on you and no sheet music (nor the downloadable recording that Avondale gave me when I bought the sheet music in pdf).

Yes, unfortunately the Avondale Press has shut its doors and my publication was transferred to the Canadian Music Centre. I really need to follow up on that. But for the moment, my focus is on doing a release of my chamber music on CD.