The last post on this topic was way back in August, so time to follow up, I think! In the early 1980s Gubaidulina encountered the thought of music theoretician Pyotr Meshchaninov, who lectured at the Moscow Conservatory on the evolutionary history of music. Meshchaninov proposed that the foundational source of musical pitch was the overtone series and that the Fibonacci series served a similar function with regard to rhythm. Meshchaninov was influenced in his thinking by his study and performance of the music of Bach, particularly the Art of Fugue. The Fibonnaci series is a sequence of numbers, each one of which is the sum of the two previous. Bartók also used the series to structure some of his pieces. Here is an illustration: 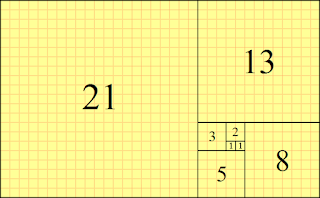 Gubaidulina approaches music from a different perspective. For her artistic form is a distillation of spirit, an organic, living process both fluid and moving. In a discussion with musicologist Olga Bugrova, Gubaidulina explained how she views the three realms of melody, harmony and rhythm, or, more organically, the root, trunk and leaves of a tree:


Mulling over which of the three fundamental elements of musical fabric within the sonorous complex might be seen as the "roots" of the tree I realized that it was rhythm. All of the harmonic, the mass of the resonance, forms the "trunk," while the contrapuntal lines exemplify the "leaves." Under the conditions of sonoristics, the melody can no longer be conceived, as in the past, as the means for developing, elaborating the material. Instead, it must manifest itself as a transformation of the material itself, and the consequence of growth from the "roots" through the "trunk." ... But with all that, one must not suppress intuition nor lose imaginative spontaneity. But, why rhythm? Because it alone presupposes the agency of laws that do not conflict with a system that embraces all possible sonic and timbral conceptions. [this quote comes from Kurtz' biography, p. 175]

I'm not sure what she means by the last sentence, but the rest is implying that rhythm is like a deep movement in the earth's crust that generates the harmonic waves of a tsunami while melody is the waves crashing on the land. Choose your own metaphor! Valeryia Tsenova has written an essay on the numerical aspect of Gubaidulina's music and I will take up that paper in a later post.

Gubaidulina, due to her non-compromising attitude, had been prevented for many years from traveling outside the Soviet Union to attend performances of her music. Finally in 1984 she was able to attend a special edition of the Helsinki Festival devoted to Soviet and Russian culture. The authorities were still unwilling to allow her to travel, but gave in when Veijo Vapio, the artistic director, stated that if Gubaidulina was not allowed to attend, the whole festival would be canceled! The first evening concert of the festival featured two pieces, Offertorium by Gubaidulina, followed by the Symphony No. 8 by Shostakovich. We have talked about the Offertorium before, a violin concerto written for Gidon Kremer, but let's listen to it again, re-creating this concert by hearing clips of the Offertorium followed by the Shostakovich symphony.

Now that's a concert! This event really was the beginning of a widespread recognition of Gubaidulina's importance. The Finnish composer Kalevi Aho wrote about the great impression she made on him when he visited Moscow in early April 1984:


I thought to myself that composers like Gubaidulina can only come from Russia. Perhaps it was fortuitous for her development as a composer that she had been confronted by many ... difficulties in the course of her career. Without these struggles she might not have developed her mind as much as she did; if everything had gone smoothly she might not have pushed herself to understand the reasons for being a composer or to thing about the higher purpose of her compositions. [op. cit. p. 180]

The first fruits of Gubaidulina's new understanding of the rhythm of musical form was a commission for percussion ensemble, In the Beginning There Was Rhythm:

in his treatise on music, which took me a decade to find in English translation because my Latin is so awful, Augustine defined music as the art of measuring (mensurating) well. Five of six books in the treatise, which I'm reading through slowly and intermittently, are discourses on poetic metrics, rhythms and accents.

Whether it's the cycles of vibration that define pitch to begin with; the ratios of different vibrational rates for distinct pitches; or melodic and structural elements of musical works; there is a sense in which all of that comes down to rhythm. The different aspects of musical art that we describe as melody and harmony and counterpoint are all different higher levels in performance of music that is possible because of rhythms in this more abstract sense, the rates of vibrations of sounds that allow larger bodies of sounds to be hard as melodic, harmonic and structural experiences. So that quote makes sense to me, rhythm is the root of the other elements once the full range of what rhythm, at its most abstract level, can actually encompass in the art of music. Plus I spent the last year or so reading theoretical writings by the microtonalist composer Ben Johnston and George Rochberg.

btw, the Kindle edition of the Matthew Riley book just dropped down to about forty bucks at Amazon in the US site

Thanks, Wenatchee, I think that you are right, that is that meaning of that last sentence. And thanks for the tip on the Riley book.