One Year in the Studio, part 1

I just read a little essay by Simon Leys on the book, published in 1840, by Richard Henry Dana, jr., Two Years Before the Mast about the time he spent as a common sailor on a two year voyage from Boston to California. For some reason, this sparked the idea of doing a little series of posts on a transformative experience in my life. I have mentioned this before a few times, but my career as a musician really took flight when I went to Spain in 1974 and spent the better part of a year studying with the maestro José Tomás in Alicante on the Mediterranean coast. This experience ended up shaping my life in so many ways that I want to go into it in more detail.

By way of context, I should mention that I was born in thinly-populated and isolated northern Canada and, were it not for a move to Vancouver Island in 1965 when my mother took a new job there, I likely would never have had much exposure to classical music. Who knows where I would have ended up: fertilizer salesman would be my guess! But the move did ensue and it involved entering a whole new world. Even the landscape was utterly different from this:

(Yes, even identifying which car is yours can be a challenge.)

Yes, there really are trees that big. It was also my first encounter with the ocean:

The physical environment was both less harsh and more dramatic. I also started to encounter an Asian aesthetic. For one thing, all the cafes and corner stores were owned by Chinese people and there were some interesting books in the library. I was particularly attracted to the Japanese woodcuts known as ukiyo-e. 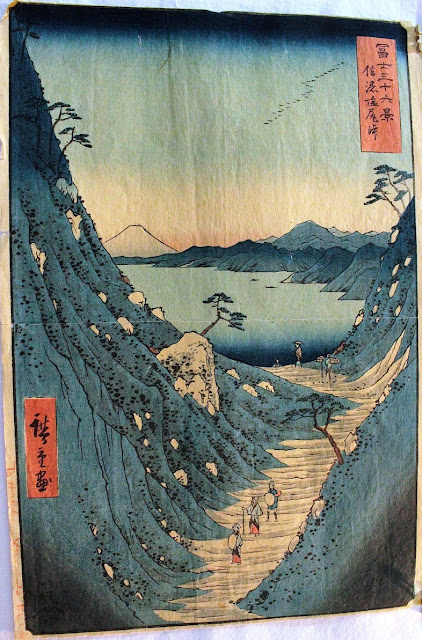 After all, if you look out west from the coast of British Columbia, the next body of land is probably Japan.

So that was one big transition. We are all a mixture of nature and nurture. How much of which characteristics are due to each is a matter of continuing controversy. But it is likely the case that while your basic qualities come from your inherited genes, how or whether these qualities are developed is influenced to a large degree by your environment. No-one raised in a cellar is likely to grow up to be a landscape watercolorist.

This likely gives us a theory as to why there are, in certain places and times an upsurging of creative energy such as in 5th and 4th century BC Athens or northern Italy in the 15th and 16th centuries or England in the 16th and 18th centuries and so on. There were enough resources available and a critical mass of creative talent attracted by them to elevate a lot of lesser talents to significant achievements as well.

Next time I will talk about my encounters with music and what they led to.

I have an interesting envoi. The only musician of any renown who came from the small town in northern BC that I lived in is Roy Forbes who performs as BIM. Here is a tune in the Canadian folk-music/country tradition. If I had stayed in the north, this would likely have been the only musical path available to me.

Email ThisBlogThis!Share to TwitterShare to FacebookShare to Pinterest
Labels: biographies