I used to have a fairly thick book that contained all the most difficult technical challenges in the guitar repertoire: all the hardest stuff from concertos and solo pieces. I had a lot of that in my repertoire: the Etudes 1, 2, 7 and 10 by Villa-Lobos, passages from his Concerto, passages from concertos by Rodrigo and Castelnuovo-Tedesco, the really hard bits from Bach lute suites, etc.

Now I am finding my Prelude 1006a, the E major Lute Suite, is just not happening! Mostly I do maintenance technique, which is enough to play the usual Spanish pieces and moderate Bach. But this prelude is nearly seven pages of unrelenting sixteenth notes. When it moves into the keys of F# minor and C# minor, the fingering gets really nasty. For those of you counting at home, there are over 1600 notes! I've been playing it so long that I don't have memory issues, but to play it well takes a level of precision and control that I don't seem to have in my fingers right now. So, I have to dig deep and move to a higher level of work.

In a way, it's like restoring a classic car. I had a friend in Vancouver who had a classic E-type Jaguar he bought new in 1966: 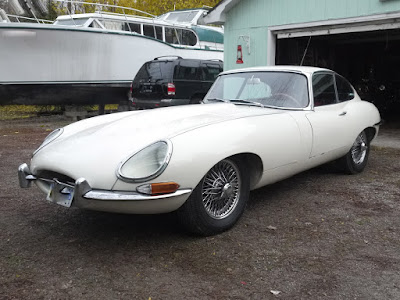 He was a bit of a car collector. He also had a 1960 BMW 3.0 and a Morgan. All white. He thought cars had to be white. In any case, when I knew him, he had had the Jaguar for quite a while and it really needed restoration. So he took it to this specialist in restoring classic cars. It took about two years! They take the car completely apart, down to the last nut and bolt, and restore each part to its original perfection. Then they reassemble the car. It is better than when it came off the factory floor. It took about two years and cost several times what the car itself originally cost! I would say it was worth it, though. Lovely cars, those.

I had to do the same with my guitar. After 20 years of hard concertizing, everything needed restoring. The fellow I took it to did a great job. Five cracks in the back, repaired; all the frets replaced; the tuning pegs replaced, all the varnish stripped and redone. It came back like a new guitar.

But now I have to do something similar with my Bach prelude. I started this morning where you should start: at the end. The last page is one of the hardest so that is a good place to start. You take each measure by itself and play it very, very, very slowly, making fine adjustments and keep playing it until the difficulties evaporate. That's really all there is to it. But it is amazing how few people practice like this. It is pretty hard mental work, but that is what leads to a smooth and elegant performance.

I recorded the prelude and two other movements from the Lute Suite No. 4 many years ago for CBC Montreal, but that tape long ago disappeared. So we will have to hear someone else's recording. This is the Swedish guitarist Göran Söllscher playing the Prelude and the Loure on an 11-string guitar. I like the tempo, but not the sound very much.

Posted by Bryan Townsend at 5:13 PM