I was just looking over my monthly statistics and I noticed an interesting thing: out of the top ten countries that visit this blog, six of them are non-English speaking. Here are the top ten in order of number of page views:


I don't think that we can assume that everyone is reading the posts in English either as I installed a handy translation gadget on the right hand side of the page. If you haven't noticed it, give it a whirl. You can translate the whole blog into most languages with one click, thanks to Google Translate.

So I just want to say "welcome" to all those non-English speakers out there. Apparently we all speak the 'language' of music!

I have some news for you as well. I just found out that my song cycle Songs from the Poets for voice and guitar will be receiving a double premiere in January. On January 18, 2013, it will be premiered at the Palacio de Bellas Artes in Mexico City in the Sala Manuel M. Ponce, and the next day will be premiered (deuxiemed?) at St. Paul's Church in San Miguel de Allende, part of the Pro Musica winter concert series. The artists are the duo Cherie Hughes, voice and Roberto Limón, guitar. I want to thank these gifted artists in advance for what I'm sure will be a great performance.

UPDATE: If you don't know the Palacio de Bellas Artes in Mexico City, this is what it looks like: 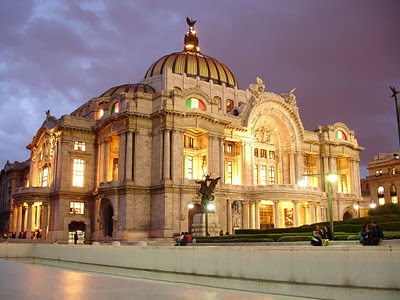 I'm also going to start preparing some of my own recordings of guitar repertoire for occasional posting on the blog. In the world of performers there is a tendency to keep people you meet on 'probation' until you have actually heard them play--only then can you judge what sort of musician they really are. So I will put up some of my own recorded performances so you can do the same.

But in the meantime, let's hear a bit of the voice and guitar repertoire. In this clip, the beginning of the song is cut off, but I like the performance. "The Herd Boy" from the cycle Songs from the Chinese by Benjamin Britten:

Originally for soprano and eight cellos, this arrangement of Bachianas Brasileiras No. 5 is by the composer, Villa-Lobos:

This lovely song is by the Greek composer Mikis Theodorakis, performed by Maria Farantouri and John Williams. It is from a 1974 album loooong since out of print. The sound quality of this clip is far from perfect, but I think the music is worth it:

Just some samples from the huge repertoire for voice and guitar.
Posted by Bryan Townsend at 8:59 AM