This brings us to the Symphony No. 5 (composed 1915, revised 1919) which has had a lot of critical attention, particularly in the form of a monograph by James Hepokoski who teaches at Yale and is the author of a number of interesting books. His book on the Symphony No. 5 is discussed at some length in the Wikipedia entry. They don't say a lot about the last movement, which has one of Sibelius' better-known tunes:

But this just by itself would not be nearly so effective were it not for the way Sibelius sets it up. It is all about layers and metric grouping. The movement starts quickly, with this skittering theme:


This is developed for several pages and leads to a new section. The tempo is the same, but Sibelius groups the measures in three so the effect is now of a slow 3/2 meter. The horns present an overlapping three chord idea:

They are transposing instruments, so here is the same passage at concert pitch:

This reminds me of a lovely section from the third movement of Stravinsky's Symphony of Psalms which was written in 1930. I like the dove-tailing of the two pairs of horns.

Once the horn chords, which are now the accompanying texture, are established, that theme I quoted at the beginning appears, first in the flutes and later in the violins. Around here there is a modulation from the original key of E flat major to C major. Then the original quick theme returns in E flat major again, but a bit mysteriously with some of Sibelius' trademark tympani rolls and sustained horn chords. Then there is a more remote modulation, to G flat major, which is the relative major of the tonic minor. I just mean that G flat major and E flat minor share the same key signature and E flat minor has the same tonic as E flat major, the key of the symphony. 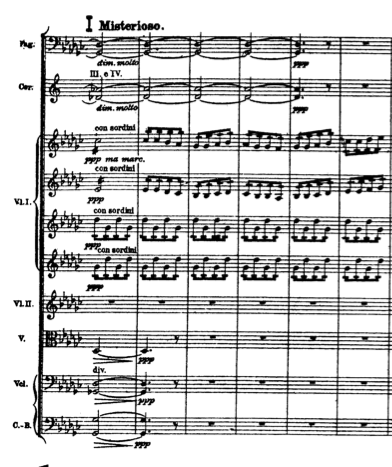 After this has been worked out in a development, we finally get the implied meter of the flute tune, 3/2, and a slowing of the tempo. And we hear a varied version of that melody, this time with all the strings in octaves: 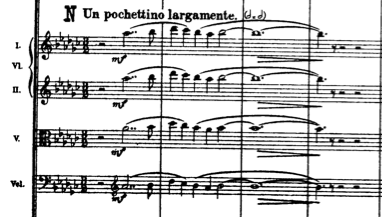 This is not G flat major at this point, but E flat minor. The music continues to slow down and broaden out and we get the horn chord motif returning as well. At the same time we modulate back to E flat major. This double process of both going from minor to major and at the same time broadening out the pace of the music is what Sibelius uses to set up the conclusion. And an unexpected conclusion it is. In the starkest way he gives us hammered chords: I6, V, V7, and then bare octaves on B flat and E flat! The first and last pair of these chords are syncopated, appearing on off-beats, the rest are on downbeats. Shostakovich ended each movement of a string quartet with V-I cadences, like little quotes from a recitative, but the effect here is quite different. Sibelius makes these chords seem like the inevitable ending to the movement and symphony. 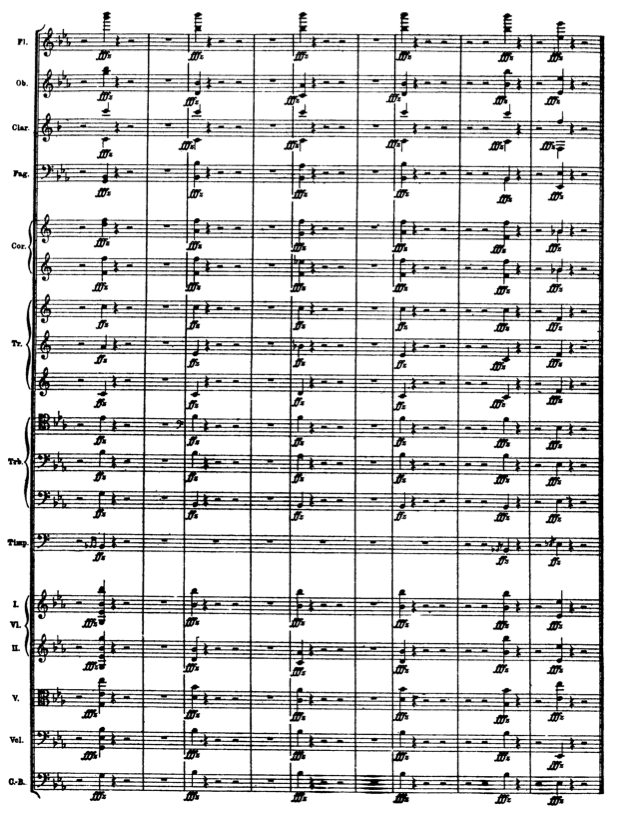 Hi,
I just came to know that Jonny Greenwood of Radiohead fame is also a CLASSICAL composer.You've made a well articulated critique of the band's work in this blog.His work has been performed by some orchestras and he is also commissioned to write new work very frequently.Your thoughts please??
I think the band's fame is making it easier for everyone involved to 'sell',but it might also mean that a better/real COMPOSER may lose the opportunity because of commercial advantage.Nowadays a lot of pop/rock musicians take up film work,but i wonder how/why they would want to write art music?

And another one I have run across recently is Bryce Dessner of The National, who the Kronos Quartet commissioned to write a string quartet. Mind you, he has a degree in music from Yale. The path of a composer these days is anything but clear, I would say. The interesting thing for me is how do they reconcile the different aesthetic demands of pop/rock music with those of art music?

You raise a good point;for me the best of classical music is about highest level of finesse.Typically i find many film/pop/rock musicians go for an over the top route, for a musical 'high' that reduces in value over time.
I did check out Bryce Dessner's work;i have to agree,he does show promise.