The whole idea of these retro record reviews is to look at some music that is out of the ordinary, or was recorded quite a while ago or is just interesting. I think this qualifies in at least two of those categories. The CD is "Honourable Brigands, Magic Horses and Evil Eye" and the musicians are Taraf de Haïdouks. Here is the cover: 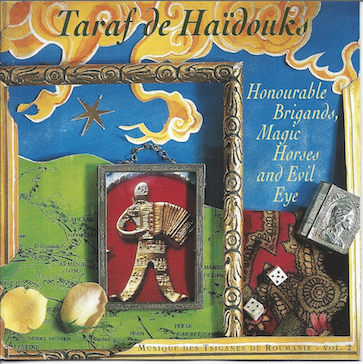 I was turned on to this group of Romanian gypsies, known by the French version of their name, Taraf de Haïdouks, by the composer Osvaldo Golijov, who mentioned them in an interview. They are virtuoso, professional, traditional musicians. Some of those adjectives may not seem to go together. In modern societies, professional and traditional are opposing categories. But it is different in traditional societies, in which modern professional musicians are less likely to even exist.

The group were featured in the 1993 documentary Latcho Drom.


The CD was released in 1994. On the cover in fairly small print it announces that this is Vol. 2 of "Musique des Tziganes de Roumanie" so it started life as a documentary record of a traditional musical genre. Then, I guess because of the movie, these guys suddenly became hip.

Taraf de Haïdouks are a group of what are known as lăutari or traditional musicians. Due to their international fame, they tour and record a lot, but still live in the village of Clejani in Romania.

Here is a somewhat longer version of one of the tunes from the album: "Turceasca":


I think this is one of those crazy dance tunes that they like to play at weddings. Towards the end there is a really wild cadenza for the hammer dulcimer.

Golijov actually stole a little tune of theirs, a doina, and used it in one of his pieces. I believe it was this one:


And here is what he did with it. The doina is preceded by a lullaby which lasts until the 5 minute mark.

Interesting group and interesting music indeed. In a later post you mention: "The musicians I was talking about the other day, Taraf de Haïdouks, are masters of their genre, but, while they did an album of classical music, it was all related to the styles they know and their interpretation consisted in "re-gypsyfying"the music."
What is the album called?

The album is called "Maskarada" and here is the Amazon link: