The title is a quotation, supposedly from the French philosopher Bernard Le Bovier de Fontenelle, cited by Rousseau at the end of his article on "Sonate" in the Encyclopédie. But while mentioned many times in the eighteenth century in connection with the controversy over the problem of the meaning or nature of expression in instrumental music, its recent notoriety stems from its use as the title of an essay by Pierre Boulez on his Third Piano Sonata published in Perspectives of New Music (Spring, 1963).

I want to go back to the original meaning of the remark: "sonata, what do you want from me?" Fontenelle was exasperated at instrumental music's lack of semantic content. The meaning of music with words could be surmised quite easily, though I wonder sometimes that people often do not seem to notice that the music accompanying text can have a rather subtle relationship to that text. It can, for example, comment sardonically or otherwise contradict or undermine the supposed meaning of the text. But what could instrumental music possibly mean? Was it mere diversion, pleasing patterns with no more significance than the patterns of wallpaper?

This question became acute in the 18th century as the instrumental genres that began in the 17th and even 16th centuries began to break away from their humble origins in, for the most part, dance music, and to take on an independent expressive role. While the Baroque composers of instrumental music like Louis and François Couperin, Antonio Vivaldi and J. S. Bach certainly created an immense corpus of purely instrumental music, it only started to take on what we might discern as a personality with the music of Joseph Haydn. Movements from symphonies or string quartets lost their abstract character and began to reflect a whole spectrum of quirky human individuality. It may have been an inkling of this that led Fontenelle to make his remark. Now, of course, as Fontenelle died in 1757, it was not the music of Haydn that he was likely to have heard, but more likely something by François Couperin. Here is Les Lis naissans from the 13th Ordre:


The title means "the nascent lilies". These kind of whimsical titles are not quite borne out in the music. This is, after all, just a rather charming allemande:

But in the hands of Joseph Haydn, instead of tacking on individual character with a colorful title, he began to instill it into the music itself, which was now hiding behind bland titles that were mere hints as to the tempo like "allegro" or "adagio". But listen to how much expressive individuality begins to infuse these movements. Here is the opening adagio from the Symphony No. 22 in E flat major, dating from 1764:

And the opening in the score: 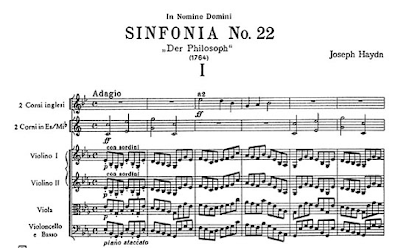 Now compare the first movement from the Symphony No. 49 in F minor (not C major as incorrectly stated on the video) from just a few years later in 1768:


Here is how that movement begins: 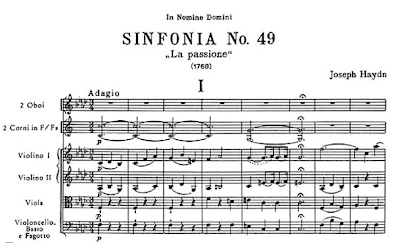 Roughly the same tempo and same instruments, but how utterly different the expression and effect. [UPDATE: Silly me! The woodwinds in the Symphony No. 22 are not oboes tout simple but rather the tenor oboe called the "English Horn" or "corni inglesi" in the score.] Instead of composing within a set of conventions and guidelines, Haydn is inventing an entirely new way of writing for each movement of each symphony. One more example? Here is the opening adagio movement from the Symphony No. 34 in D minor dating from about 1766: 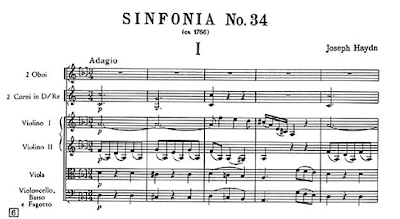 Each movement, though written in roughly the same slow adagio tempo and for exactly the same instrumentation, achieves an entirely different effect. The individuality is achieved through a number of different techniques. Notice how they all begin piano (softly) with the exception of No. 22 which has the horns loud. The texture of the accompaniment is different each time: piano staccato in No. 22, sustained in No. 49 with the low strings playing just on the first beat, and in No. 34, arpeggiated chords in the 2nd violin with the low strings on the first and third beats. The melody is also utterly different in each movement. In No. 22 it is a dialogue between the horns and oboes; in No. 49 a somber movement up to the minor third in quarter notes, and in No. 34 a long, held note, that suddenly leaps into rhythmic activity just at the end of the phrase.

There are composers that are beloved of the general public and then there are composers that are especially loved by other composers because of their seemingly endless capacity for invention. Among these the foremost are probably J. S. Bach, Domenico Scarlatti with his 555 keyboard sonatas and Joseph Haydn with his 108 (or is it merely 106?) symphonies.
Posted by Bryan Townsend at 6:59 AM

Thank you for the explanation. Very thorough and concise!