I thought it might be nice to provide another example of a sequence, perhaps one slightly less terrifyingly complex looking than the Bach one I put up in the previous post. So here, chosen absolutely at random is a nice sequence from a Haydn symphony that incorporates some lovely suspensions.

First, just a note about suspensions: this is a simple harmonic device that comes out of counterpoint. Suppose you are writing a cadence. A very simple and expressive way of decorating that cadence is to simply delay the resolution of one or more voices. Here are two examples: 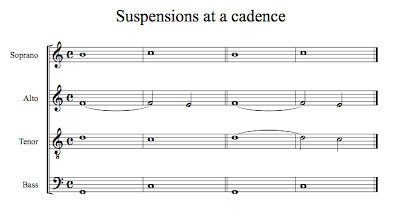 This is just a simple V7 to I cadence in C major. Following the rules, the leading tone (B) goes up to C and the 7th (F) goes down to E. What I have done is a very typical suspension. Instead of the 7th moving at the same time, it delays by a half-note and resolves after the other voices. This makes for a lovely expressive dissonance. Because of the intervals over the bass note, this is called a "4-3 suspension". You could suspend two notes, as in the second example where the D is held over and resolves later. This is a "9-8 suspension", again, because of the intervals above the bass note. As you can see, you can do both at once. Here is what they sound like:


Now let's look at an example from Haydn. Here is a short sequential section from the exposition of the first movement of his Symphony No. 71 in B-flat major: 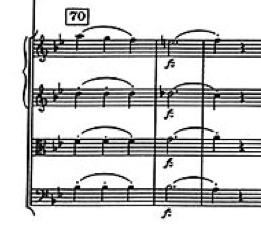 There are a couple of things Haydn has done to decorate this sequence. First of all, there is some nice imitative counterpoint going on. You can see that the descending scale fragment in the first violins is echoed in the second violins. The suspensions are in the second violin part as it holds over its note one beat into the next measure. For example: the F from m 2 (in this example) is held over into m. 3, then resolves to the E natural. Similarly, the E natural is held over into m. 5 and then resolves to the D. These are both 7-6 suspensions. One more element that Haydn adds is to decorate the end of the sequence which is a very inconclusive cadence on F, the dominant, now the goal of the modulation. The E naturals have put us into F major. The cadence is from vii°7 (E natural, G, B flat, D flat) to I6 (with the A in the bass). The D flat makes a nice chromatic passing note.

Now let's listen to this in the orchestral context. The sequence starts around the 1:45 mark in this recording:


So that is one tiny little moment in a Haydn symphony. By the way, isn't that a great adagio introduction to the movement?
Posted by Bryan Townsend at 8:50 AM