You might recall that I am working my way through the Haydn Edition--not an absolutely complete edition of all his works on CD, but close enough: 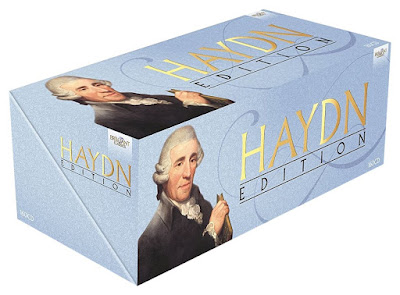 I'm up to CD 45 of 160 which puts me well into his masses and other religious music. As you may recall, Haydn is known primarily for his symphonies and his string quartets, though some of his piano sonatas and piano trios are pretty well known as well. But he also wrote two very successful oratorios, The Creation and The Seasons and one other less well-known, Il Ritorno di Tobia. He was in charge of the opera house at Esterházy and composed fourteen operas as well. In his last years his main responsibility to the Esterházy family was to compose one mass a year. Added to his earlier masses this gives us a total of fourteen. Busy man!

Naxos has been particularly diligent at doing box sets devoted to particular genres. They have ones devoted to all the Haydn oratorios, masses, concertos, piano sonatas, symphonies, string quartets and piano trios. I bought the integral (almost) set illustrated above because I particularly wanted to hear those pieces that are usually neglected like the baryton trios and the operas. Haydn's operas are particularly neglected these days.

But to get back to the masses, I am surprised at how much I have been enjoying them. They are just full of remarkably beautiful music for orchestra, occasionally organ, vocal soloists and choir. I am recalling how much I like choral music. Somewhere Charles Rosen makes the point that late-18th century religious music is perhaps not as "religious" as it might be. It is rather too cheerful and luxuriant perhaps. Compare to Bach's oratorios, cantatas and mass, which are far darker and more numinous. But Haydn's (and Mozart's) masses should not be neglected on musical bases as they contain a great deal of really wonderful music. We should not perhaps underrate their sincerity as well. One gets the distinct impression that at least some of the Austro-Hungarian aristocracy were sincerely Christian people.

Haydn masses are mostly large, well-developed works showing not only his famous gift for structure, but also a resplendent use of orchestral color and ravishing melodic sense. Take for example the Missa Cellensis in honorem Beatissimae Virginis Mariae in C major, Hob. XXII:5 (labeled the Missa Sanctae Caeciliae in the Brilliant Classics box). This is over an hour and ten minutes in length--the Gloria alone is over thirty minutes!--a substantial work indeed.


Here is just the Et resurrexit from the mass with Haydn's original manuscript:

UPDATE: Sorry, not the manuscript, but an early edition.

That's pretty terrific. Four years into the wars following the French Revolution, in 1796, Haydn wrote  one of his most popular masses. Titled the Missa in tempore belli in Haydn's manuscript it is nicknamed in German the Paukenmesse due to the dramatic use of tympani. This one is a bit shorter, at forty minutes or so, but that still makes it nearly twice as long as most Haydn symphonies. Haydn's masses typically follow the fivefold division of the ordinary of the Catholic mass: Kyrie, Gloria, Credo, Sanctus and Agnus Dei. Sometimes, as in this mass, the Benedictus is a separate movement between the last two. You can find the whole of the Latin text here (beginning at the bottom of page 2): http://www.latinliturgy.com/OrdinaryFormMassText.pdf

There is quite a good film of Leonard Bernstein conducting the Missa in tempore belli in 1985. The film itself begins around the 4:30 mark in this clip and is introduced with an interview with Bernstein. The performance itself starts at around the 10 minute mark, but listen to Bernstein's comments before. Something interesting, the audience does not applaud when the conductor and soloist enter.


So that's a sample out of the fourteen masses Haydn wrote (he also wrote a great deal of other large-scale religious music such as the Stabat Mater, Hob. XX:bis, which is also well over an hour long). Well worth exploring I would say!
Posted by Bryan Townsend at 8:08 AM

I've run out of time tonight, but will note that at St Agnes Church in St Paul, Minnesota several of Haydn's Masses continue to be regularly sung in their proper liturgical context, although I suspect that if one looks a bit more closely than I've had the chance to do tonight that the Masses with very lengthy parts are sung infrequently if at all-- thirty minutes for the Gloria is probably pushing the boundaries even at St Agnes. There would be several fits of apoplexy if such a thing were attempted at my own parish church, ahem. Once, let alone on a regular basis.

Wow, what a treat for the citizens of St. Paul! Every week they have a serious piece of religious music. The Twin Cities Catholic Chorale must be a fine group of musicians indeed. The notes list the chorale, conductor, organist and vocal soloists, but I can't tell if they have an orchestra as well?

While I expect that there may be some amateur instrumentalists who involve themselves in the various musical programs at St Agnes, somewhere on the website it's mentioned that 'professional instrumentalists' are used for the 'season' of 28 Sundays/feasts there, October through May (although not in Advent and Lent). Was there once, in 1981 or perhaps 1980; my memory is playing tricks, alas-- was going to write that Gounod's St Cecelia Mass was sung that Sunday but I'm pretty sure that Mass was at Old Saint Mary's in Cincinnati (where also the tradition of Latin High Mass on Sundays is maintained, although without such a splendid organisation as the TCCC, as I recall-- I know there were professional soloists and orchestra for that Gounod, the College Conservatory of Music in Cincinnati being resource-rich).