I know that not everyone is as fascinated with Gubaidulina's music as I am, so I promise that we will have lots of other kinds of posts. But I think, as we trace the career and compositions of Ms. Gubaidulina, there will be interesting material for almost everyone.

Right now I am reading the biography I mentioned in the last post. It is not a perfect translation from the German original--occasionally there is a puzzling phrase--but it is pretty good. Gubaidulina was deeply involved with music from very early on, so the biography does not wander far afield. Here is a photo of the composer, aged six years, already at work: 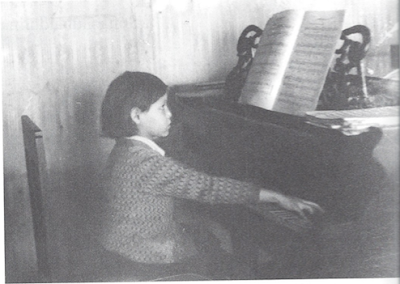 Sofia was the youngest of three sisters and at age five she and her older sister Ida both began piano lessons. Her parents, despite being very poor, managed to purchase a baby grand piano for them. At the time they lived in Kazan, the capital of Tatarstan and a city of some 250,000 people. Sofia's schoolteacher mother Fedosia Fyodorovna Elkhova was ethnic Russian and Orthodox. Her father, Asgad Masgudovich Gubaidullin, a geodetic engineer, was Tatar and Muslim, though non-practicing. His father, Masgud, was an imam. The practice of any religion was severely suppressed in the Soviet Union. Incidentally the Tatars are descended from the Mongol peoples of Genghis Khan that, as the Golden Horde, spread all the way from Mongolia west to the Volga river and beyond.

Born in 1931, Sofia came along at a difficult time in the Soviet Union. It was partway through the first of Stalin's Five Year Plans which involved forced collectivization of agriculture and the persecution of the better-off peasants, the kulaks. Beginning in 1932, all religion was to be eliminated from Russian culture. Sofia had a deeply religious temperament from an early age which she realized the first time she saw an icon of Christ in the corner of a farmhouse where they stayed one summer. Her parents were horrified so from then on she kept her inner beliefs private.

Stalin's purges reached a climax in 1937. If you will recall, Shostakovich was first denounced in 1936 for his opera Lady MacBeth and only barely escaped punishment. Many of his friends were shot or sent into prison camps. Sofia's family managed to avoid any of those fates, but in 1941 came the onslaught of the Nazi invasion of the Soviet Union and Kazan filled with refugees. Food was very scarce and many people starved. Sofia herself suffered from severe malnutrition and malaria.

This information is from Kurtz' biography of the composer.

Let's end with a composition by Gubaidulina. This is a song from the very early cycle Phacelia for soprano and orchestra written in 1956 when the composer was in her mid-20s. Blogger won't embed, so just follow the link:


https://www.youtube.com/watch?v=m_vZyWXJ_4I
Posted by Bryan Townsend at 9:05 AM

Thank you Bryan, for bringing Sofia Gubaidulina back to my attention. I appreciate your concise summary of her youth and background, and especially I commend your choice of this early work as an entré into her music. I'm not really a fan of Gubaidulina's music, but the singing here is gorgeous and the piano and vocal melodies are much more listenable and pleasing than other music I've hard by this composer. In fact, I really like this music!

So after that nice song she wrote in 1956, I let youtube continue and it then gave me another Gubaidulina piece, "Am Rande des Abgrunds für sieben Celli und zwei Aquaphone," dated 2002 and rendered in this video at the 2012 Lucerne Festival. Moments of austere and haunting cello, slowly ascending, and some icy metallic even more haunting sounds, but in the end I don't want to feel haunted, and a lot of it seemed more a playing with effects (sonic and psychological) than the melodic and harmonic order I seek in my need for comfort. Eventually (after 13 minutes) I turned it off as not my kind of music.... The 20th century offered a lot of music that just goes too weirdly far afield for my simplistic, baroque-loving ears.

Gubaidulina is a challenging composer, yes! That early song is surprising for its lyricism. Her Serenade for guitar, that I posted a while back, is also surprisingly lyrical, and it dates from 1960. But her more mature music strains the bounds of our sensibility.

Oh, and yes, I have listened to the piece for seven cellos and waterphones. Eerie indeed. How she chooses to structure the music is perplexing, but I still have the feeling that her goals are genuinely aesthetic.