My rare posts on the mechanics of guitar-playing, which include strings, always seem to attract attention, so here is another one. I just put on a new set of strings and these were also a new brand of strings that I have never tried before, Aquila, made in Italy. 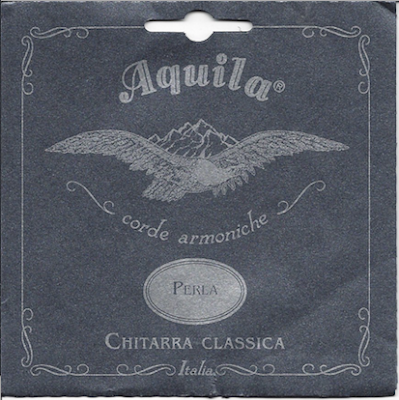 They purport to use an entirely new method and material so I was eager to see what they were like. Here is how they describe their new design, on the back of the package: 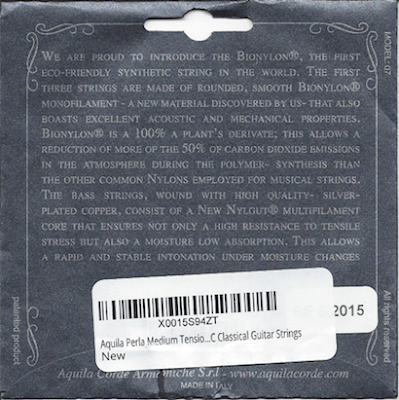 So, eco-friendly! My first impression was not good, because while I was putting the second string on, the first one snapped right at the bridge. This does happen perhaps 5% of the time because of the radical design of the bridge on my guitar: 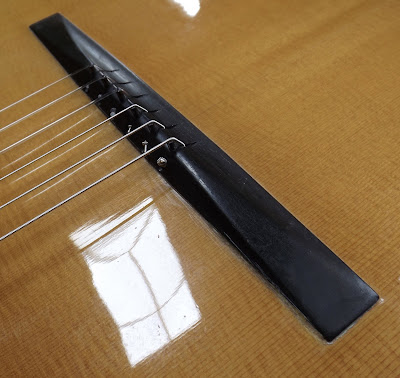 As you can see, instead of the usual bridge, which is one piece of bone or plastic, each string goes over an individual tool steel peg. They are held only with a knot in the end and, in the case of the trebles, I melt a little ball on the end. On rare occasions, something happens there and the first string snaps. I just re-do the knot and try again. I have never had it happen twice with the same string and it has never happened after the initial putting on of the string or with any of the other strings, just the first. No breakage in concert, which is why I have never really worried about it! But if anyone out there knows why it happens, I am certainly curious.

Once I got them on, I started to like them right away. They seem a bit denser than other strings and they certainly have a lovely, warm sound and perhaps a bit more sustain. Anyway, I will do another post after a couple of weeks when I have gotten used to them. If you want to try them out, here is the link to the Amazon page.

Oh, these strings are obviously intended for professional players because, instead of each string coming in its own labeled envelope, or with a little label sticker on the string, these come in two bunches so you have to figure out which string is which! Through thick and thin, I'm sure you will figure it out.
Posted by Bryan Townsend at 11:38 AM

Email ThisBlogThis!Share to TwitterShare to FacebookShare to Pinterest
Labels: guitar-playing