I'm going to start a new series of posts devoted to a single composer, the, as Wikipedia describes her, "Tatar-Russian" composer Sofia Gubaidulina (1931 -). What fascinates me about her music is what often draws me into a new piece or new composer: there is something about the music that keeps my attention, keeps me listening and, I have no idea how this music was composed. Yes, I love and am fascinated by the music of, say, Joseph Haydn, but at this point in time we have a fairly good idea of how the music came to be, even if imperfect and incomplete. In the case of Igor Stravinsky, that I just spent dozens of posts discussing, we are starting to have an idea of how his music came to be. But with Gubaidulina we (or at least me!) are stumped. Sure, there are familiar elements, but how and why they come together in the way they do is a mystery to me. Take for example the early and very simple Serenade for guitar. Here is the complete score: 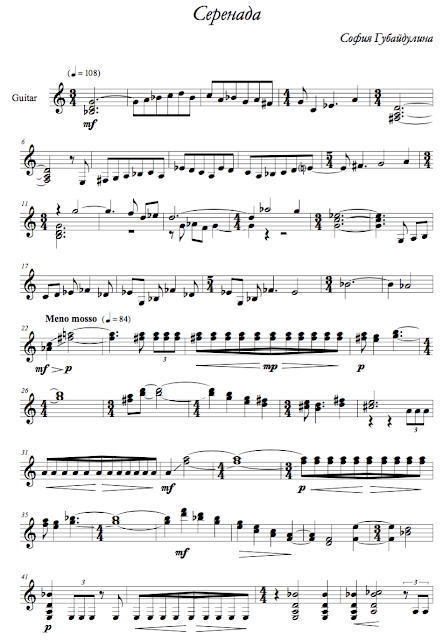 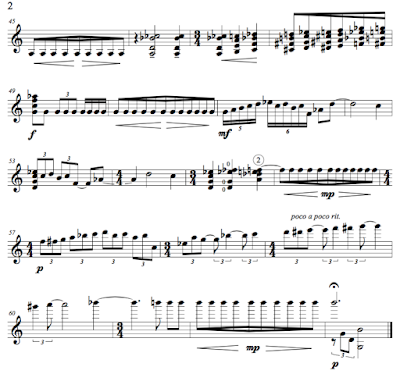 At the beginning it appears to be in a very familiar musical language: G minor. But that measure of 4/4 seems to have no purpose. Later on there is a measure of 5/4 that again seems out of nowhere. But we are just getting started because those melodic themes just seem to evaporate and a C minor chord appears out of nowhere. Then there is a new melodic passage that stresses an F flat and D flat. With no preparation or functional reason, we suddenly veer into a long, repeated passage on the dyad F#/A. This leads to more thirds that outline E minor and B minor. The repeated-note motif recurs on A, then on the dyad F/A, then the stack of thirds comes again, this time on B flat. Repeated low E. Then a new harmony, 4ths with a high B flat. I could go on, but while there are certain ideas that return again and again, like the repeated notes, speeding up and slowing down, and certain ideas, like the fourths with a minor third on top, are moved around in parallel, the compositional logic here is very unlike anything I have ever seen before. I'm sure there is a logic because the piece works. It carries the listener along and seems to have its own mysterious logic. It is just that there don't seem to be any analytical tools that help us out. Please correct me if I am mistaken!

Here is a performance of the piece by Patrik Kleemola:

There does not seem to be a logic to the harmony as we understand it in tonal or modal music. Sure, you could argue that the piece is on G, minor at the beginning and major at the end; it ends with a G major chord. But what happens in between is hard to explain. Chords come and go without any justification in terms of tonality OR voice-leading. The melodies are not tonal, nor modal, nor octatonic, nor whole-tone. The rhythms are particularly obscure.

Now if this were a bad piece of music, we could just say, sure, it's bad because it is so disjointed. But my ear and instincts tell me it is a good piece of music! So I am just stumped. Which is what fascinates me.

Now let's look at another piece, from 1970, that is a hundred times more perplexing than this simple one. This is the Concerto for Two Orchestras which is for symphony orchestra and jazz band! You can just imagine how much the Soviet authorities loved this! It ends with a nice B minor chord, but wow, the rest of it? Have a listen:

I recommend going to YouTube and using full screen so you can read the score.
Posted by Bryan Townsend at 10:09 AM

Bryan, I've been waiting for you to write a post on Sofia Gubaidulina so finally someone could explain this music I so love -- and it turns out you're nearly as stumped as me! Somehow, her music sounds much less incomprehensible than it ought to. Is the logic contained within the aesthetic (if that's the right word)? Motifs manipulated to ascend and falter and fall, to struggle and then breathe -- and I fear I'm giving in to empty adjectives... Anyway, look forward to this series of posts!

I am very new to her music. I have heard a few isolated pieces before, but made no effort to come to terms with them. Now I am very interested and am just starting to have a look at the music. One thing, she manages to make ordinary tonal gestures sound very strange!

Bryan - The concerto is (sorry to use overused superlative) awesome! So urban and trippy. And imaginative. Thanks for bringing it to our attention. You rock!

You're welcome! It wowed the heck out of me.

Just looking at the Guitar score it seems similar in principle to the Chaconne for Piano piece you posted elsewhere. I see certain general elements that are sequenced to avoid boredom - sort of the Keith Richards rule of doing something different every 5 seconds. So as you say there is the repeated note element, there is a syncopation element, there is a scalar melody element. Also notice that she maintains certain typical tonal gestures, octaves in the piano bass clef, thirds for the guitar. The melodic movement is jagged or smooth but not relentlessly abrasive or disconnected. I think we in the 21st C have ears loose enough that we can follow along with this even though the recurrent gestures are somewhat inconsistently applied or perhaps it's slightly unpredictable variants. It goes back to my earlier point questioning the importance of internal repetition when we listen on demand now.