Concerto for Bayan, Percussion and Orchestra

There is an old joke that says that a gentleman is someone who could play the accordion, but chooses not to. Also said of the saxophone. But it is hard to think of anyone, other than Sofia Gubaidulina, who could write a very serious piece for accordion and orchestra. The piece is called Fachwerk (which refers to the old German architectural style where the wooden frame is visible) and it is written for the bayan, the very popular Russian folk instrument, a chromatic button accordion. One of Gubaidulina's core interests is Russian folk music and its instruments.

Houses in fachwerk style are very common in eastern Germany: 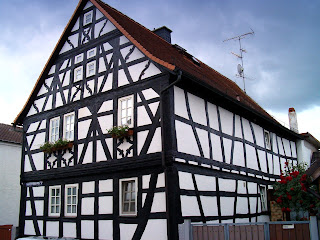 I saw a lot of them when I used to visit with my ex-wife's family in Saxony. I have been reading that Gubaidulina tends to create a formal framework for her pieces using numerical proportions such as are found in the Fibonacci sequence so the title might refer to some sort of framework like that underlying the piece.


This piece is rather more tranquil than most of her other music.
Posted by Bryan Townsend at 8:38 AM