Before leaving Winterreise, I want to look at one more song: the last one, "Der Leiermann" which means "hurdy-gurdy man", someone who plays the hurdy-gurdy, a European folk instrument. 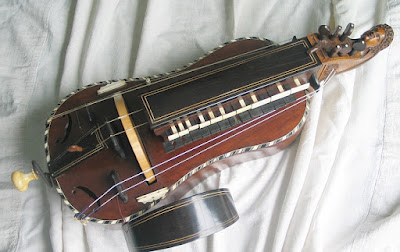 The hurdy-gurdy, like the bagpipe, is a drone instrument. A rosined wheel, acting like a violin bow, constantly plays the strings giving a one or more note drone. The keys press tangents onto the strings allowing the player to sound out melodies over the drone. Schubert's song evokes this very closely:

I keep saying that one of the most remarkable things about great composers like Schubert (and Beethoven) is how they can achieve such powerful results from the simplest of means--and this is the perfect example. The few measures I have posted above, the very beginning of the song, contain all the materials used in the song. Only the slightest alterations are made in its course, such as this in the piano:

And this in the voice:

A composition student might reject this as being too simple, too "obvious" (whatever that means), but in Schubert's hands it is the most devastating end to this large cycle of twenty-four songs, most of them quite grim. The A/E drone continues in every measure and there are only two harmonies: E major (the dominant, sometimes with its seventh) and A minor, the tonic.

At the end of this long winter's journey of despair, to quote the Wikipedia summary:


24. Der Leiermann (The Hurdy-Gurdy Man) Behind the village stands a hurdy-gurdy man, cranking his instrument with frozen fingers. His begging bowl is always empty; no one listens to his music, and the dogs growl at him. But his playing never stops. “Strange old man. Shall I come with you? Will you play your hurdy-gurdy to accompany my songs?”

It may be the poet in the persona of the forlorn lover who is speaking, but it is pretty clear who the Leiermann is: Schubert himself. At the end of his life (he was to die within the year), he is sick, impoverished and virtually unknown in his own city (he was the only one of the great Viennese masters to be actually born there). And his music? Does anyone listen to it? Or is it nothing but the feeble scrapings of a hurdy-gurdy, trapped within its drones, played by a lonely figure on the edge of town. This is a familiar psychological state; the emotional claustrophobia that comes when it seems there is no escape from an unendurable fate.

It is time to listen. This is Dietrich Fischer-Dieskau accompanied by Alfred Brendel (with English translation):

I've very much enjoyed this series on Winterreise. When, a few years ago, I made an abortive attempt to learn to play the piano, "Der Leiermann" was one of the pieces I most wanted to learn. As you say, the material is quite simple, and it's such a wonderful song. Alas for me.

A few months ago I was able to hear Winterreise in concert, with Christian Gerhaher singing. It was a great night -- the only concert I've been to this year! I heard, however, that the organizers were reduced to giving tickets away to music students in order to fill up the hall. A shame.

It's always a nice thing to give tickets to music students, especially for a concert like that. Is it possible to hope that they might have given some away even if sales had been better?

Possible, yes. This particular hall sits on the University of Toronto campus, adjacent to the Faculty of Music, so they might well have a policy of distributing a few tickets to students. But for this concert I understood that quite a number of tickets were given out, so as not to embarrass our fine city with a poor turnout for a great talent.

Oh, I know that concert hall. Seats about 600? Yes, we live in a time when Adele is greatly appreciated, but Schubert, not so much! I'll bet that the only countries where you could reliably fill a hall when presenting Winterreise would be Germany and Austria.