The question came up in a recent comment thread of just what a piano reduction of an orchestral score is, and what it is good for. But first, let's back up a bit. As the orchestra developed from its beginnings around 1600, it has grown larger and larger and incorporated more and more instruments. The orchestra required to play the Turangalîla Symphony by Messiaen is more than one hundred people, including about ten just to play the percussion instruments.

This is not a problem for audiences or performers: hey, more work for musicians! But it is a problem for music students. A music student, especially one in either a theory or composition stream, has to study a lot of music. These students tend to be pianists simply because the piano is a remarkably capable and flexible instrument. In fact, given some limitations, the piano can even play quite a few orchestral scores by "reducing" them to what the fingers can encompass. In this way a student can study an orchestral score by playing it on piano. Of course, just playing it is not analysis, but playing the score can aid analysis. Listening to a recording while following in the score can also be useful, but it is less useful than reading it on piano. Why? Because playing the notes is far more engaged than just hearing the notes and seeing the notes. Actually understanding the notes is an even deeper engagement.

But enough idle chatter: let's see how this actually works. Here is a very simple example, the opening of the Symphony No. 6 by Beethoven. This is the first page of the first edition: 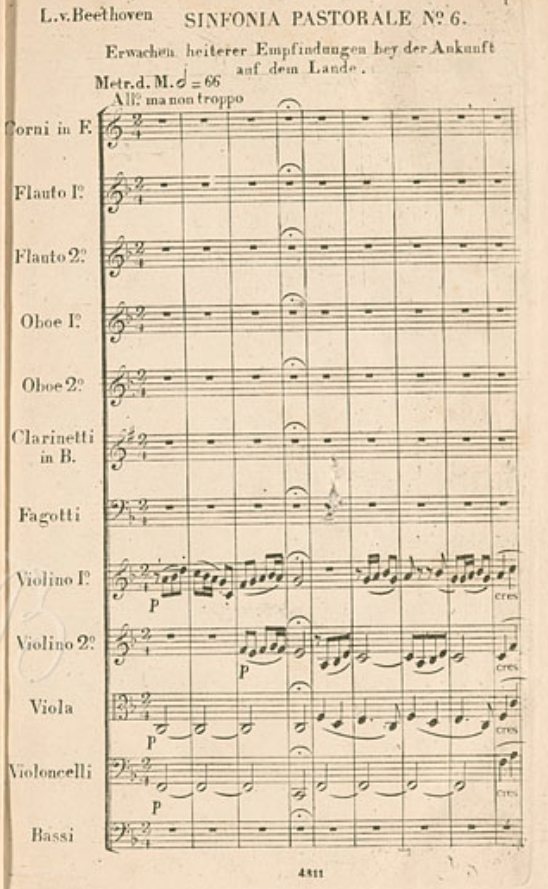 This is a transposing orchestral score and I need to explain exactly what that means. This symphony is in the key of F major and the key signature for that is one flat, B. If you look at the extreme left side of the staves you will see first the clef, treble, alto and bass, then the key signature. But here is something odd: while most of the instruments, including all the strings, the flute, the oboe and bassoon, have indeed one flat, others do not. The horns, at the top ("corni"), for example have no sharps or flats, while the "clarinetti" have one sharp. What's up with that? This is the transposing part of the score. Some wind instruments are transposing instruments, meaning that when they play a note in their part, it sounds differently than it is written. Horns in F, for example, when they see a C, sound an F. That's what "horns in F" means. Their C major actually sounds as F major, so their key signature is not one flat, but no flats, the same as C. The "clarinetti in B" are actually in B flat because of a peculiarity in the way German refers to notes. In German, B flat is "B" and B natural is "H". It's a long, complicated story! But using clarinets in B flat means that when they see a C, it comes out a B flat. So if you want them to play a C, you have to write a D. Clear?

At this point in history, an orchestral score was pretty much a collection of all the parts, with the notes transposed accordingly. Nowadays, a score might also be a "concert" score, i.e. non-transposing, with all the parts sounding as written. This is easier for the conductor (and music students). Music software can convert from one to the other at the touch of a button. Most scores are still, as this one is, transposing scores, so you have to take that into account when you are reading.

What else? Oh yes, there are, on this page, three different clefs. These are those fancy thingys at the very beginning of each stave. The treble clef is a stylized "G", showing what line the note G is found: the second from the bottom, where the clef curls around. The bass clef is a stylized "F" and the two dots bracket the line for the note F. The only other clef on this page is the alto clef, used by the violas. It is a "C" clef, meaning that the middle of the ornate bracket shows where the note C is. C clefs can also be found on other places on the staff.

Another aspect is the layout of the instruments. All the strings are grouped at the bottom from low to high. Above them are all the wind instruments with the horns at the top. In current scores it is a bit different: the brass, including horns, trumpets and so on, are in the middle of the score with the percussion, tympani and so on, just below. So the modern score, from top to bottom, is organized: woodwinds (high to low), brass, percussion and strings.

Apart from the notes, there is also a tempo indication "Allegro ma non troppo" (fast, but not too fast) and a metronome mark showing that the pulse is 66 beats per minute, with the half note receiving the beat.

Whew, that was a lot of explanation for just a few seconds of music!

Now, what would a reduction of this look like? Pretty simple, as the winds don't play on this page. Here is how Franz Liszt played it on piano:

But what about when the music gets more complicated, with more instruments? Here is just from a few pages later, when the winds come in with that same theme:

And here is how Liszt played it:

He has preserved all the important lines while leaving out less important ones like the repeated high-C eighth notes in the oboe (fourth line down in the score). He even keeps the cello tremolando in the left hand, combining it with the theme.

These are simple examples, the kind of thing that you would do in first-year score reading. An advanced challenge would be Stravinsky's Rite of Spring where the complex rhythms and bewildering array of clefs and transposing winds make reading a transposing score horribly complex. Tenor clef? Bass clarinet in B flat? Clarinet in A? Horn in F? Piccolo clarinet in D? But good music students in theory and composition do manage to meet these challenges. What helps is that you are reading the score, not performing it, so you don't have to play it up to speed! Slowly, slowly does it.

Let's have a listen to the opening movement of the Symphony No. 6 by Beethoven. From Australia, this is the Peter Seymour Orchestra PSO led by John Ockwell:

Posted by Bryan Townsend at 9:55 AM

Email ThisBlogThis!Share to TwitterShare to FacebookShare to Pinterest
Labels: analysis

The goal, then, is to include as many of the parts as possible in the reduction, as many as it is possible for a pianist to play? and presumably the reducer doesn't presume that he is writing for the Liszts of the world? or is there some sort of recognised common level of skill that anyone composing a reduction would know of? ah, but if he is writing the reduction to be read in the studio by other composers or students then I suppose it doesn't matter if not every one of them is sufficiently technically proficient to actually play the thing. Fascinating. I had never really thought about this, about e.g. Liszt's transcriptions of Beethoven and Schubert et al: those are simply reductions under another name, although designed to be performed. Hmm.

Have the vaguest possible recollection of the transposing business being explained to me 35 years ago (thank you, Mrs Smith) but if anyone had asked I would've said about e.g. B flat clarinets that the 'in B flat' means... well, we don't need to air my ignorance more widely than really necessary.

The main purpose of piano reductions is as a study aid: you play as much as you can of the score in order to delve into it. How well you play it is pretty much irrelevant. This kind of piano reduction, certainly the most common, is not even written down. In order to illustrate the idea or process I chose a reduction by Franz Liszt because it was easily available. He toured Europe playing the Beethoven symphonies on piano as a kind of tour-de-force. But that is really a highly atypical instance of the piano reduction.

Thanks! This conversation sent me to Wikipedia, where I found this page, Opus Transcribisticum, where there are scores and hundreds of piano reductions. I never knew there were so many! as the writer points out, before recordings (and with a piano in every middle class home), this is how people far from the concert halls heard 'new music'.

Neat! It's true, everything is on the internet.