The King of Instruments

Elvis Presley is the king of rock and roll (or is it Little Richard?) and Michael Jackson is the king of pop (at least according to the album title), but which instrument is the king of instruments? Traditionally this title is given to the organ as we can see from this documentary of that title which surveys six different European organs.

I used to own an album of music recorded on a historic organ in the Church of St. Thomas in the little village of Covarrubias in the province of Burgos in northern Spain. 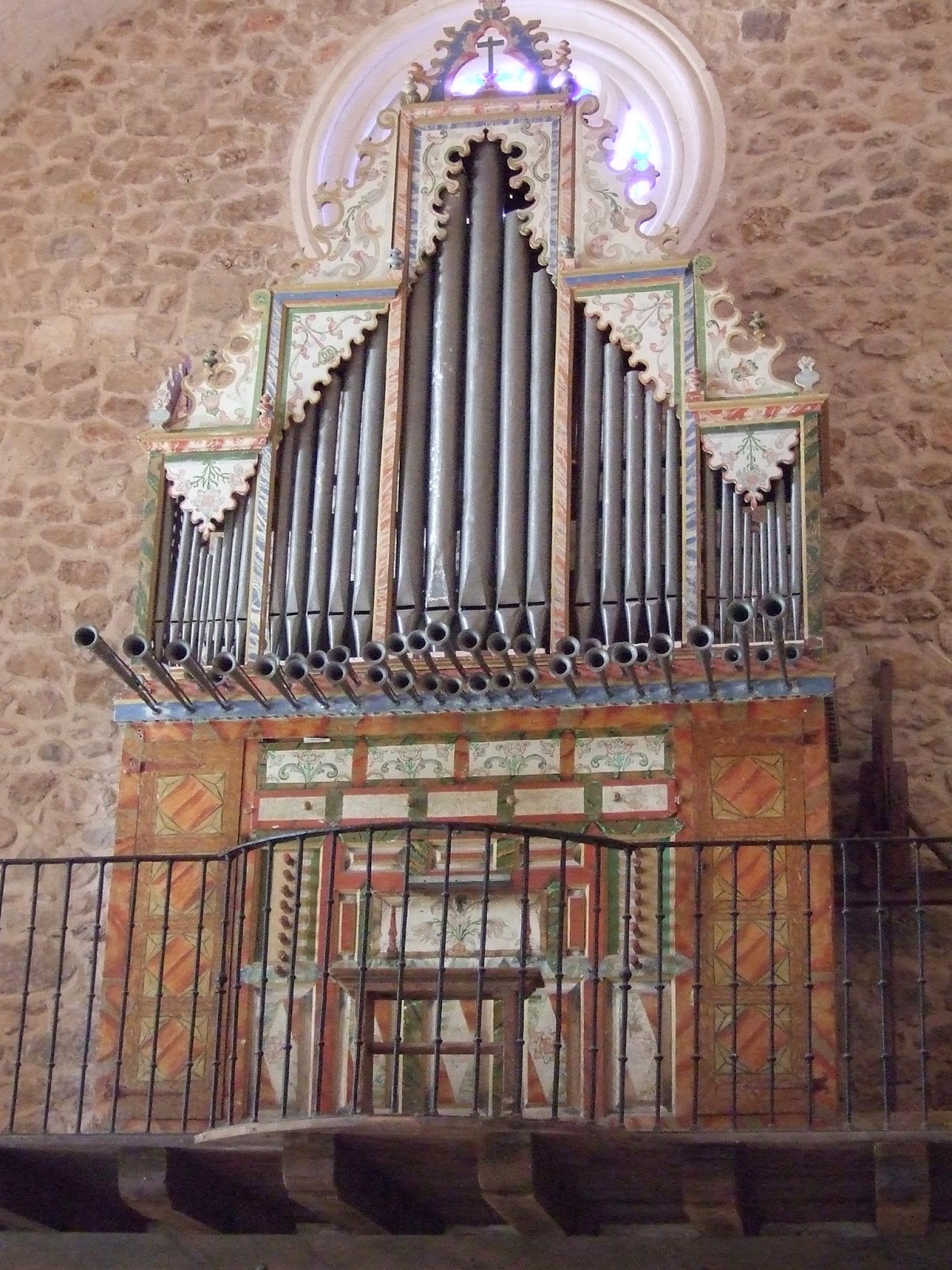 Here is an amateur video that captures some of the delightfully "crunchy" sound of this organ--particularly the trumpet stops:


I can't find much on the web, but as I vaguely recall from the liner notes, the organ dates from the 16th century.

The history of the organ goes back much farther than that. Under the name hydraulis or water organ, because it used water pressure to create air pressure to drive the pipes, it was used by the ancient Greeks and Romans. Here are the remains of one of those ancient organs dating from the 1st century BC and discovered near Mt. Olympus in Greece: 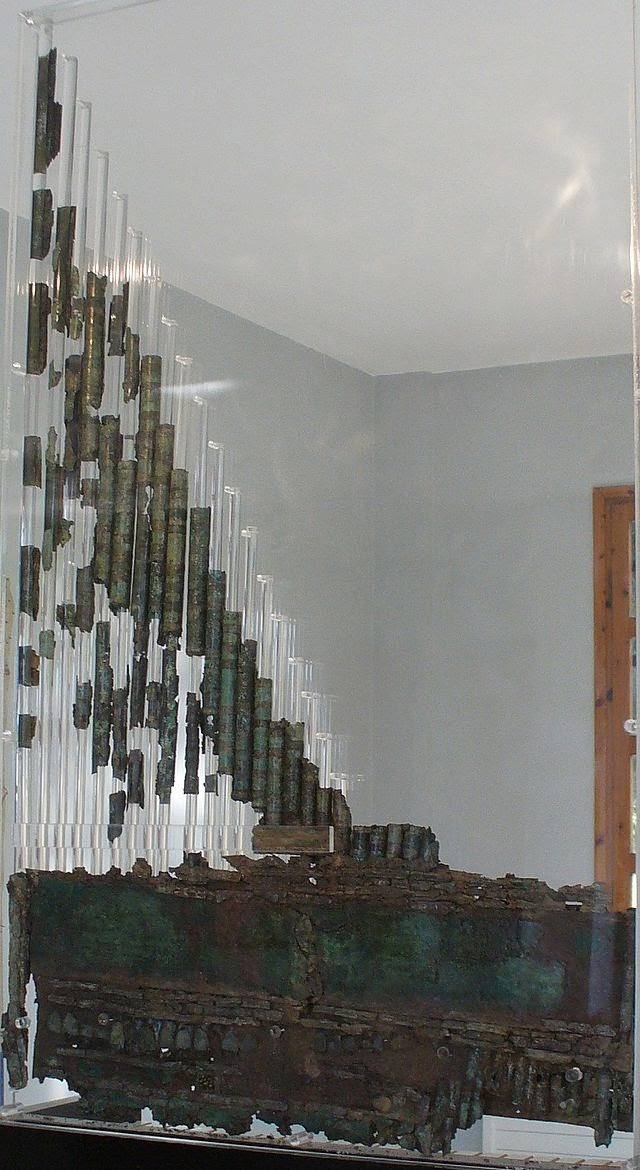 Scholars have reconstructed a couple of ancient organs, but that's pretty much where it stops as there is no extant music for them surviving. The modern pipe organ design dates from the 14th century. This instrument, in Milan, was begun in 1395, but has been renovated continuously since then. The external decoration dates from the 16th century: 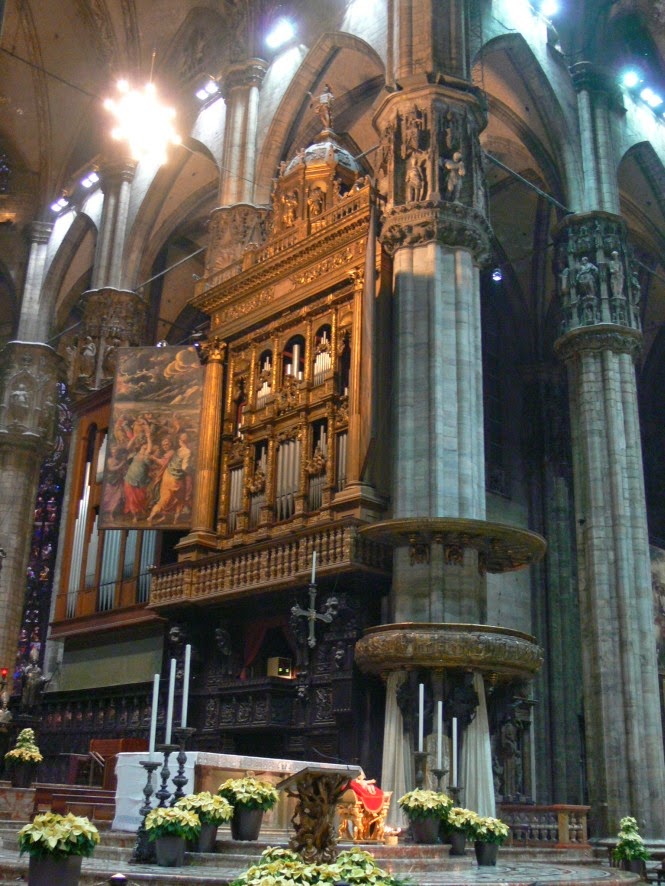 Perhaps the golden age of the organ was the Baroque when extremely fine instruments were built for every church, especially in the German-speaking countries. Bach received his biggest fees as a musician for services in testing and evaluating new organs, which could take several days. Here is an example of a north German Baroque instrument: 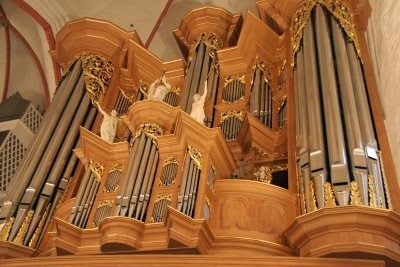 And some music by Bach that would have been played on it:


He may have actually written that piece as a test of the qualities of an organ.

Organ design has continued to develop and in the 19th century French builders made considerable contributions. This tradition continues to this very day with the Casavant Frères from St. Hyacinthe, just east of Montréal in Québec, Canada. Just the other day their new organ, built for the Montréal Symphony's new concert hall, the Maison symphonique, was inaugurated in a concert. The Wall Street Journal did an extensive review here. The instrument weighs 25 tons and cost $4 million. The concert included the Symphony No. 3 "avec orgue" by Saint-Saëns. Here is the last movement:

Posted by Bryan Townsend at 9:29 AM

Email ThisBlogThis!Share to TwitterShare to FacebookShare to Pinterest
Labels: organ

I believe Mozart is usually credited with the organ as being the "king of instruments" quote.

I would say that if he had access to a modern piano, then he would agree with me that the piano is the god of instruments.

Ah, I didn't know that was a Mozart quote. Hey, my Casio digital keyboard can do grand piano and about 300 other instruments!

Did you see my post about pianos where I talk about the Fazioli company?

I did, they are basically the Lamborghini of pianos.

Even though you were joking about the Casio, there is a huge potential that hasn't really been tapped with high end electric keyboards. I've got a Kawai keyboard with wooden keys that gives a decent piano feel. It doesn't touch my Steinway, but its real potential is not replicating a piano's sound, or any other instrument's, but instead playing back entirely new sounds.

Popular music has certainly made use of the keyboard synthesizer, but even still I think the true potential has hardly been touched.

The only problem is the world of MIDI and synthesis/sampling is very complex and very fragmented. You practically have to be a computer scientist to really dive into that world... as a result you don't see a lot of high level musicians who have a firm grasp of that stuff. I'm slowly trying to break through.

As a guitarist for most of my life up to now (apart from a bit of study of the voice and dallying with the flute and harmonica), I have been pretty oblivious to the piano. But as you say, the possibilities are enormous. Just the fact that you can purchase an adequate digital electronic keyboard with MIDI and sampling for $200 means that even poor people can have a piano/synthesizer at home. And, again, as you say, the higher end ones are getting more and more sophisticated.

My needs are very simple and at the present I don't feel I need to delve into this stuff too much, but it sure is interesting.