One big milestone in the development of a musician is the first time they use recording technology. I guess this happens earlier and easier now then when I was young. I remember the first chance I got was when the local audio-visual store got in their first cassette recorder (as opposed to cassette player). We didn't have the money to buy it, but we managed to talk the sales guy, a friend of ours, into letting us borrow it overnight. I can't remember what we did with it, but a couple of years later I used a reel-to-reel machine (better quality) to do an album of my own songs. This was when I was eighteen or nineteen, before I became a classical musician. We used the tape recorder, and I can't remember if it was two channel or four channel, to tape separate tracks and put them together. So on any particular track I would be playing rhythm guitar, lead guitar, bass guitar and singing--all recorded at separate times. A friend of mine was on drums and another friend on organ. This was right after Paul McCartney did something similar for his first solo album. I can remember seeing a video--this would be probably in 1970--of Paul singing and playing all the instruments through the magic of video overdubbing. But I can't find it now. Here is a song from that album. Paul is doing everything:


But that's not what I want to talk about. I don't remember too many details about our sessions to record those songs, except that we had to do things several times to get them right and every time we overdubbed we got more hiss.

The act of recording made a much bigger emotional impact a few years later when I was a classical guitarist. The first few times I tried to record myself it was horrible: the sound was so awful and so different from what I imagined I sounded like that I almost wanted to avoid recording from then on. The playback just sounded so alien: all this high-frequency stuff that seemed exaggerated. By that I mean there was a sort of atmospheric background hiss and every little sound, like walking on the hardwood floor, was very percussive. This was because I was recording myself. I would have to go to the tape machine and hit record, then walk back to my chair and sit down. The guitar sounded funny and my voice, if I said anything, sounded high-pitched and strained. Also, through nervousness, I could never get it right.

There were lots of reasons for this: poor recording equipment including a low-quality tape machine, so-so microphone and poor environment. I was just recording in my living room. Also, no editing capability. All errors carefully preserved!

But the biggest problem was that I was just learning the classical guitar. My technique wasn't very good. A few years later I made an audition tape when I was in Spain for a Canadian university and it came out pretty good even though it was just a cassette and, again, not edited. Still, my first few experiences with recording left me with a feeling of dread. Whenever I saw one of these, I got apprehensive. It felt like a gun aimed at me to expose my every flaw as a musician: 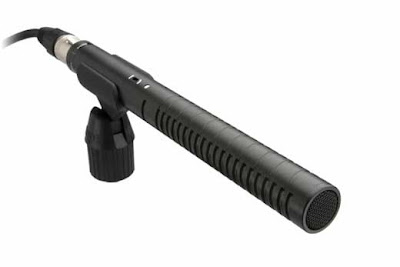 I did have an interesting experience as an undergraduate when I was asked to be a session musician on a soundtrack for a children's show. Just some simple music, but it was in a professional studio and they processed the sound so that my guitar sounded huge! That was cool. I had some good experiences with the CBC in Montreal as well. Great studios, great equipment and great engineers. Also, they had editing capacity. It takes a lot of pressure off knowing that they can splice parts of two takes together.

Now this is what I actually want to talk about. Once you become a capable musician it is not things like your sound that are the big issue, or not for me at least, it is rather those little flubs that might pass in a concert, but are glaring on a recording which is listened to over and over. Imagine you are playing a technically tricky piece and just two bars from the end you slip and play a wrong note. You can't live with this so you do it again. But it is quite possible that you will keep making either the same mistake or different ones. Every time you do it again you get more upset with yourself so after ten or so takes, you just can't play any more! This has actually happened, not only to me, but to many musicians in the recording studio. It is a high-pressure, unforgiving environment. Here is my recording of a rather tricky piece by Agustín Barrios that took me quite a few takes to get down. "Las Abejas" means "bees" in Spanish, which is why all the pictures of bees:


That being the case, you have to learn how to make it a psychologically better environment. Go easier on yourself. Technology can help. With digital editing, you can punch in, that is to say, cut in, almost anywhere. You don't do the whole piece over, just back up a couple of bars and take another run at it. You don't waste time and energy re-recording music you have already played correctly.

Last weekend I went back into the studio for the first time in quite a while to record a solo suite for guitar. From my years of recording experience I knew how to prepare, always trying to play with ease and confidence and it worked out quite well. A couple of the pieces I did in one take and the others just took two or three. Tomorrow we are going to edit the takes together and I will post the results here.

Here is a photo from last weekend's session. I know that I look worried, but I'm really not.