When the Best Music of the Year Isn't

As we have noted before, these are not the best of times for classical music. Mind you, there are some things that are great: lots of wonderful musicians, some great composers and a never-ending stream of great recordings re-released at bargain prices. I'm just coming to the end of the eighteen CDs contained in this collection: 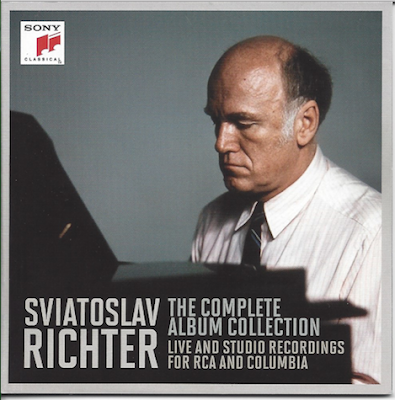 But if we look at the fortunes of classical music in public spaces, they are dismal indeed. Take the Wall Street Journal's end of year stories on art and culture. This is what they offer for The Best Music of 2016:

In rock and pop the year 2016 is defined for now by the loss of David Bowie, Leonard Cohen, Merle Haggard, George Martin, Prince and Maurice White, among other exemplars of modern music. To help assuage the grief, there seems an almost endless supply of musicians who enrich, inspire and entertain; in 2016, as in recent years past, there were too many good recordings to access and comprehend. I’ve listened to all or part of about 1,300 albums this year, and what follows are capsule summaries of the best of what I’ve savored.

The writer, Jim Fusilli, is "the Journal’s rock and pop music critic." And he doesn't pretend to be anything else. But the editors place his article on the best pop and rock of the year as the best music of the year. And no, there is not a companion article on classical music. As far as the WSJ is concerned, classical music doesn't exist (despite their employing other people to write about it). Taking a glance at the New York Times, they don't seem to have end of year tributes up yet. But in past years they have commemorated the deaths of any kind of musician (the drummer for Spirit?) as long as they were not classical musicians! Even Alex Ross complained about it.

There has just occurred a significant upheaval in the world of politics demonstrating that the mass media, far from having their finger on the pulse of the world, are actually closed off in their own "progressive" bubble. There is a concerted and widespread policy to suppress all news that does not support The Narrative. That bubble seems to be starting to pop. We can only hope that some of the same thing happens in cultural news.

Hundreds of thousands of people attend classical music concerts, millions more buy or stream classical recordings. Everywhere there are music schools with dutiful students and cranky teachers. As a result there are possibly more classical musicians playing today than ever before in human history. But as far as the mass media are concerned We Don't Exist. Being made invisible in the public space is something of a crime against humanity, wouldn't you say?

Edward Gardner leads the National Youth Orchestra of Great Britain and the CBSO Youth Chorus in a performance of Gustav Holst's The Planets:

Posted by Bryan Townsend at 7:55 AM

Email ThisBlogThis!Share to TwitterShare to FacebookShare to Pinterest
Labels: journalism

Best of year lists are generally about recordings issued in the past year. While classical music does have its following and live concerts are strong and hopefully will stay that way, recording sales are dismal (as Norman Lebrecht occasionally points out with figures). Nothing besides classical crossover sells well enough in the year of its release to make a big deal about, and if a record does eventually sell and become a classic recording, then that happens over years as a long-tail effect and so is outside the bounds of any best of year list.

Also, considering that the vast majority of the West no longer cares for classical music outside of a niche and popular music has long since won out among the ordinary masses, for you to paint this as an “progressive bubble” media versus ordinary people reverses the actual state of things. If newspapers started giving classical music more attention rather than less, most ordinary people would complain about the media serving elitist interests. I love classical music myself, it’s why I follow this blog, but the battle for cultural supremacy has been lost, and its your pop-listening neighbours, friends, and family on the other side of the lines, not faraway "progressives".

I just have a small quibble with your first paragraph: the new complete Mozart box of 200 cds has sold a whole bunch. From Billboard:

"The biggest-selling CD act of 2016 doesn’t sing. He doesn’t play guitar and he doesn’t tour. In fact, no one alive has ever seen him.

In a quirky result bound to appear as a question in pub quizzes for years to come, a massive boxed set of Wolfgang Amadeus Mozart's recordings has emerged as the biggest-selling CD release of the year."

I'm glad you are pushing back on my analysis, though. But I think that what the reality is, is likely different from either my view, which is, frankly, speculative, and from your depiction which is the more conventional wisdom. Who is right? Perhaps neither of us. But I have seen so much distortion of the truth in the mass media over recent years, that I think it is prudent to question it.

Perhaps we are dealing with a phenomenon similar to "preference falsification" where people tend to go with the flow, except for, as you say, a tiny minority. Perhaps popular music looms so large because a small, not a vast, majority pushes for it to be heard in public places. I don't know. But I certainly don't trust the mass media view.

As to cultural supremacy, well that is the question! That is a pretty loaded phrase, but I like it. If it were a fair contest between Beyoncé and Bach? Hmmmm...

Lebrecht's original claim for the sales of the box set were swiftly debunked in the comments section of said post. And while sales of this box set quickly spiked, this can easily be attributed to institutional purchases. BIS's Complete Sibelius also sold a lot of units very quickly, but it's understood that little of it went to individual consumers as opposed to libraries.

"Perhaps popular music looms so large because a small, not a vast, majority pushes for it to be heard in public places."

Honestly, I don't understand how you could be so out of touch with Western society since at least the 1980s (when I went to school in that decade, already listening to classical music was something only one or two children in a class did, and they were rightly seen as oddities). The vast majority of the population never listens to classical music, so why would they want a music they never listen to played in a public place?

My reference isn't to Lebrecht, but to Billboard.

Let me make just one small correction: The vast majority of the population never HEARS classical music so they don't have much chance to want anything other than pop music, which they hear almost without letup.