Here is the kind of advertising you just don't see any more: 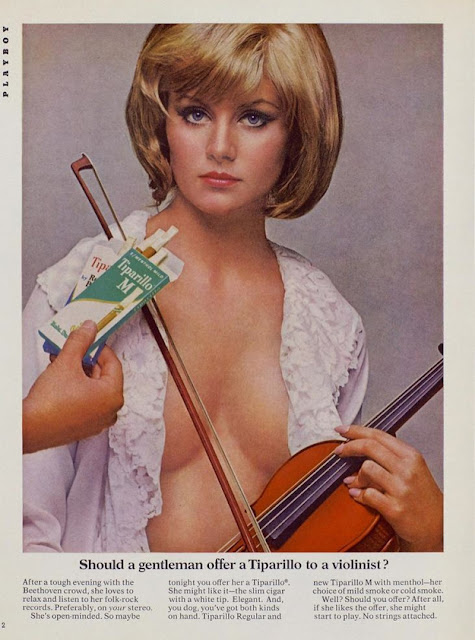 Though, oddly, you might see something similar in the promotional materials for an up-and-coming young artist. I think that what puts this beyond the pale is probably the product--who smokes any more?

Here is a serious piece by Anne Midgette from the Washington Post about the very unproductive commissioning program at the Met:


If you start handing out $50,000 commissions to major artists, there’s not a lot of excuse for coming up almost completely empty-handed at the end of a decade. Muhly’s “Two Boys,” which began under the program’s auspices, made it to the Met’s main stage; everything else was either rejected (like Rufus Wainwright’s “Prima Donna”), fell through, or simply withered on the vine, and no new blood has been added to the pipeline for years.

The New York Times has a review of three concerts of music with overt political themes.

But surely the advantage that artists have over bureaucrats is precisely the freedom to make the unheard audible and to conjure the unimaginable. “A Gun Show” almost coquettishly advertises its underlying uncertainties and flirts with its own impotence. It’s unlikely that victims of gun violence will draw solace from it, or that grass-roots members of the National Rifle Association will come out of it reconciled with the idea of tighter controls.

The article doesn't quite manage to put its finger on the problem, so let me help. Artists are almost uniformly political progressives and the recent election demonstrated quite clearly that people are very sick and tired of being preached at by those who consider themselves morally superior. As a matter of fact, they are not morally superior and this kind of sanctimonious artwork is simply bad political propaganda. Best if they stuck to, you know, music.


The Guardian has got some of the finest performers of today to pick out some of their favorite pieces by Mozart on the occasion of the release of a new complete Mozart, released on the 225th anniversary of his death. 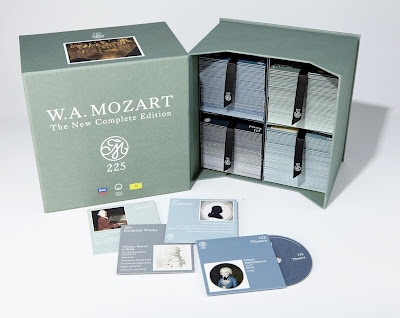 I guess we knew this was coming: Alex Ross weighs in on Donald Trump in a piece at the New Yorker: The Frankfurt School Knew Trump Was Coming:

With the election of Donald Trump, the latent threat of American authoritarianism is on the verge of being realized, its characteristics already mapped by latter-day sociologists who have updated Adorno’s “F-scale” for fascist tendencies. To read “Prophets of Deceit” is to see clear anticipations of Trump’s bigoted harangues.


However the Trump Presidency turns out—whether it veers toward autocracy, devolves into kleptocracy, or takes some unheard-of new form—America has, for the time being, abdicated the role of the world’s moral leader, to the extent that it ever played that part convincingly. “Make America Great Again” is one of Trump’s many linguistic contortions: in fact, one of his core messages is that America should no longer bother with being great, that it should retreat from international commitments, that it should make itself small and mean.

This reminds me of the old joke about the perennial New York Times headline: "Republicans: Threat or Menace?" I may have to do a whole post on this piece. As usual, Alex Ross is trapped within his Upper West Side echo chamber where Certain Truths Are Just Self-Evident.

Let me just re-iterate my policy on politics on this blog: it is to avoid politics entirely except as it intersects in an interesting way with music. One way to approach it is as Richard Taruskin does in an essay I was just reading. He examines in considerable detail the phenomenon of "Russia Abroad", the cultural currents of the diaspora of Russian artists and intellectuals after the Revolution of 1917. The influence on composers like Stravinsky, who separated himself from the Russian traditions to become an internationalist, Prokofiev, who returned to the Soviet Union in hopes of greater public acceptance of his music and Shostakovich who lived much of his career in the shadow of Stalinist oppression, was significant.

The problem with Alex Ross' take is that, instead of researching the complex details in an objective way, he just regurgitates the standard clichés. That Trump's rallies were nothing but "bigoted harangues" is received wisdom by people, like those who read the New Yorker, who have never attended one. I avoid political speeches like the plague, but I forced myself to watch parts of a couple of Trump's speeches and I heard nothing even faintly resembling a bigoted harangue. What I heard were promises to "drain the swamp" in Washington, which, in conjunction with a look at his appointments so far, looks as if there will be considerably less oppressive authoritarianism in the US since where it comes from is, overwhelmingly, federal bureaucrats and their myriad micro-oppressions in the form of constantly increasing regulations. Everything he accuses Trump of has been the standard operating procedure of federal administrations for a very long time. If we look at how the stock market has reacted, it seems as if the election of Donald Trump is very good news indeed.

One other element of my policy re politics is to push back against errant nonsense, which is what Ross' take is.

Now let's have a really great envoi for today. I've been listening to a lot of Sviatoslav Richter lately, specifically the six concerts he gave at Carnegie Hall over the course of a couple of weeks in the fall of 1960. In the middle of the Cold War, no less. Here is a concert he gave in Leipzig in November of 1963. The first half is three late Beethoven piano sonatas! Honestly, other than Grigory Sokolov or Igor Levit, who plays programs like that these days?

Posted by Bryan Townsend at 8:18 AM