If the Wall Street Journal won't give us the best classical music of the year, The Guardian will. Here are Andrew Clements' top 10 classical CDs of 2016. I will just quote the first one:

Trifonov’s Rachmaninov recording was a highlight of 2015, and his extraordinary account of the Transcendental Studies, one of the greatest challenges in the piano repertoire, surpasses even that. Despite the sustained brilliance of the playing nothing is done for effect; the dazzling technique is entirely used to musical ends. These are the performances of a great musician, not of a showman.

Oddly, I have not heard a single one of his selections.

An article at the New Yorker reminds me why I used to read it faithfully: How to Be a Stoic:

That is pretty much the principle I follow in talking about music: how do we judge what is good? Here is the summing up:


Born nearly two thousand years before Darwin and Freud, Epictetus seems to have anticipated a way out of their prisons. The sense of doom and delight that is programmed into the human body? It can be overridden by the mind. The eternal war between subconscious desires and the demands of civilization? It can be won. In the nineteen-fifties, the American psychotherapist Albert Ellis came up with an early form of cognitive-behavioral therapy, based largely on Epictetus’ claim that “it is not events that disturb people, it is their judgments concerning them.” If you practice Stoic philosophy long enough, Epictetus says, you stop being mistaken about what’s good even in your dreams.

Yep. Though I would also recommend Plato and Aristotle.


Also at the Guardian, is a feature on young recorder virtuoso Lucie Horsch:

Lucie Horsch arrives with a small backpack from which she produces half a dozen recorders of various sizes. Showing the skills of an assembler of Ikea furniture, she puts them together at lightning speed, before giving a demonstration of her art.

Horsch is the latest big thing in recorder playing, if that’s not a contradiction in terms. She is 17, Dutch, gamine – as, it seems, recorder players ideally should be – and has just released a charming disc of Vivaldi concertos, the first recorder player ever to sign to Decca Classics. Recorder playing, sometimes seen as the Cinderella of classical music, is going to be allowed to come to the ball.

I have always had a lot of respect for the recorder as an important instrument due to my friendship with a real recorder virtuoso many years ago. I recall visiting his basement studio once and gazing around with wonder at rack after rack of shelves teeming with recorders I asked, "James, how many recorders do you have?" After a moment's contemplation he replied, "I'm not sure exactly, but I have twelve working altos..." Pepe Romero, when I studied with him, supposedly had, to his wife's despair, around eighty guitars. No wonder he was pursued by up-and-coming luthiers wherever he went! I'm rather the opposite, I have to say. I have had a superb guitar since the mid-80s and rarely feel the need to even play another, let alone purchase one. Still, if I had to, I would probably fly to Australia for one, where they have some outstanding builders.

In a remarkably disinterested act, the Donaueschingen Music Festival, a long-time venue for avant-garde modernism, invited one of the foremost critics of such, Roger Scruton, to give a lecture this past October. The Future Symphony Institute is publishing it:

IMPORTANT COMPOSERS, FROM SCHOENBERG AND STRAVINSKY to Ligeti and Stockhausen, have been premiered in this place and before this audience. Along with Darmstadt, Donaueschingen has helped to restore Germany to the central place in European musical culture that it has occupied in the past and will always deserve. Now, in its latest and securest phase as the Musiktage, the Donaueschingen festival has become a symbol of musical modernism, and it is a great honour to be invited to speak from this podium to one of the most educated musical audiences in the world today. But in this short talk I will try to outline why I question the prominence in our musical culture of the experimental avant-garde.

That is the introduction, but I encourage you to read the whole thing. As this is rather a core topic here at the Music Salon, I'm sure I will be putting up a post devoted to the talk.

Arthur Kaptainis, Canada's best (and almost only) classical music critic, opines that CDs offer one advantage over streaming: they make great gifts at Christmas. He recommends Danse Macabre, a recording on Decca by Kent Nagano and the Orchestre Symphonique de Montréal: 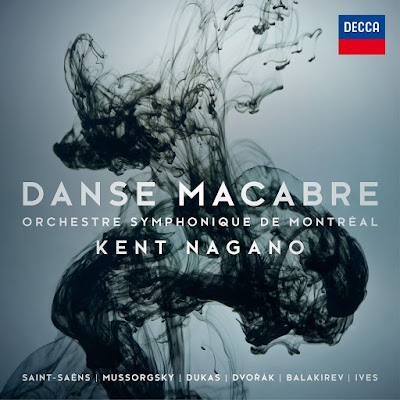 Apart from the delightfully creepy Danse macabre by Saint-Saëns, there are some interesting novelties as Kaptainis notes in his review, plus the familiar Night on Bald Mountain by Mussorgsky that we will put up as our envoi today. YouTube has an excellent live performance from 2015 by Nagano and the OSM, but sadly, it is just an excerpt.

For the whole piece we turn to Leonard Bernstein:

Posted by Bryan Townsend at 7:52 AM