The Last Time I Was in Spain

A week from today I get on the plane to Madrid. I was digging around in my tiny photo archive and came up with a couple of photos. I say tiny because I hardly have any photos from my career in music. I never owned a camera for most of it! My horn-player Japanese roommate in Salzburg gave me my first camera, but I don't even have a photo of him! It took me a while to cotton on to the concept of taking photos. But I think I'm up to speed now. I got a nice camera a few months ago so I will be taking a lot of photos on this Madrid trip.

But first, let's look at some photos from the last time I was in Spain. It was 1974. On my way back to Canada I stopped off in Madrid for a few days to hang out in the Prado some more. I met some American girls in the hotel and we decided to take in some flamenco. This the group at Las Brujas (no idea if it is still in existence): 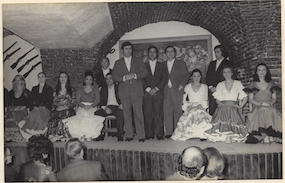 They had someone who went around photographing the guests and selling them copies. Here we are: 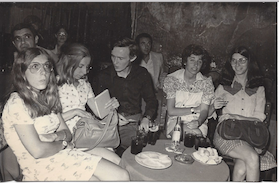 I'm the guy in the middle and I think we are exchanging addresses. No, of course we didn't keep in touch!

I have a couple of photos from Alicante, the city on the Mediterranean coast of Spain where I studied with Maestro José Tomás. These are a lot of the students from the class. In the centre, holding the green file is the winner of that year's competition, Masahiro Umamoto (at least, if I recall his name correctly). I'm not in this photo, but there are guitarists from Spain, Peru, the Philippines, France, Belgium, Venezuela, Japan, the US, Finland and other places I'm sure. 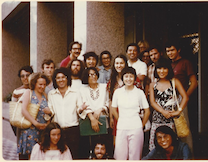 UPDATE: Silly me, of course I'm in this photo, that's why I have it! I'm the funny looking guy in the top row, second from the left.

My last photo was taken out on the boulevard in front of where the master classes were. I'm in this shot, crouched down second from the right. At the far right is my good friend Klaus Helminen. No, of course we didn't keep in touch. I just googled his name and can't find anything that isn't in Finnish, but it looks as if he is still playing concerts. The people in this shot are a lot of the same ones from the other one, taken the same day. But in the centre, in the blue shirt, crouching down is my roommate at the time, an Irish guitarist whose name I cannot remember. 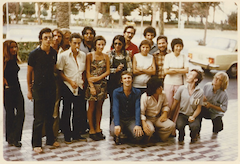 So there you have it, my complete photo archive from 1974 in Spain.

Just you wait, I'll have better photos from my upcoming visit. Now, let's have some music. One of the pieces I learned in my time there was the English Suite #1 by John Duarte:

Posted by Bryan Townsend at 9:54 AM

Email ThisBlogThis!Share to TwitterShare to FacebookShare to Pinterest
Labels: biographies

While you there, try and make a quick visit to Portugal.
You will love it.
:o)

There's the Portuguese Guitar
https://en.wikipedia.org/wiki/Portuguese_guitar
with its unique sound... and then there's "Fado" of course.

Thanks, Ricardo and welcome to the Music Salon. I'm sure you are right, but I don't think it will happen this trip. Other than Madrid, the only places I see going are El Escorial and the Valley of the Fallen, both day trips from Madrid. Next time!

Thanks for sharing your pictures,Bryan. You look like such a kid!
It's just starting to get really hot here in South of France and Madrid is much hotter so be prepared. I spent a couple of months in central Spain,Segovia,years ago and it was always a very bearable dry heat. But I guess in Mexico you're used to that? Apparently 2CELLOS are in Madrid this week. It's a pity you're just missing them. You could have walked over to the concert hall and given them a piece of your mind, you know, for acting like such punks in that Wake Me Up video. I'm sorry, it still makes me laugh when I think how indignant you were. Forgive me for teasing you!

Well, I was pretty young! I know Madrid can be hot--the last time I was there was in August. But from what I read, May is not too bad. And yes, living in Mexico (though at 6400 ft) I am pretty used to heat.

Thank goodness I'm missing 2CELLOS! You know, so I wouldn't be tempted to go and give them a piece of my mind.

Have never quite understood the fascination some people have for photographing when they are travelling but that's just me; glad you have a good camera for your purposes! I hope you're practicing with it now-- half the time I do want to photograph an event &c with the mobile the moment has passed before I negotiate through the buttons. On the other hand (having thought about it in time) the mobile's video has come in handy on more than one occasion.

I lived most of my life not taking a single photo and as a result, there are some now I wish I had taken. I hope I take some interesting photos I can share with all of you. I even thought briefly of taking along some recording equipment (it is amazingly portable these days) and doing some "soundscapes". But decided to refrain.