Tonight I will be attending the second performance of a new production by Romeo Castelluci of the opera by Arnold Schoenberg--perhaps history's least likely opera composer. This production is a collaboration with the Paris Opera and I'm really looking forward to it. I don't think I have ever attended either a production at this level, not being much of an opera-goer, nor one of the new era of European opera productions that seem to be just a tad more radical than they used to be. Here, for example, is a photo from a rehearsal this week with a naked woman and a live bull: 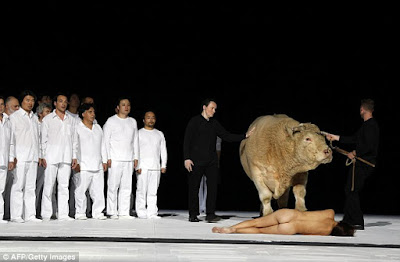 There seems to be a bit of a controversy and, since this is the 21st century, it is in objection, not to the naked woman, but to the exploitation of the bull. Sigh...

Yesterday, on my way to the Palacio Real I passed by the Teatro Real where the performance will take place. Here is the front, with a statue of Isabel II:

And here is the back (or is it the other way around?): 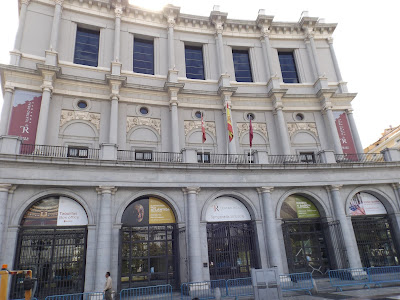 This is the side that faces the Palacio Real, so perhaps it is the front. In between is the Plaza de Oriente, which features a large bronze statue of Felipe IV on horseback (which I didn't get a photo of) and the Visigothic kings of Spain who ruled before the Muslim invasion in the 8th century, which I did: 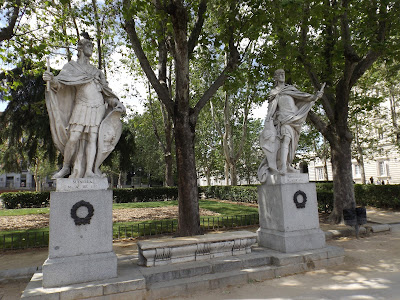 There are ten on each side of the square.

But back to Moses und Aron. You notice that I am giving the title in the original German. You might also notice that I am, following Schoenberg, spelling "Aron" with one "a" instead of two. Schoenberg, when it came to certain things, like the number 13, was intensely superstitious. If you spell it "Moses und Aaron" you have a title thirteen letters long, which he wished to avoid. So he dropped one of the letters "a". Now, you see in the poster on the Teatro Real that they put back the letter "a". But there is no problem because in the Spanish, "Moisés y Aaron" there are only twelve letters, so no need to drop an "a". Whew!

A commentator sent me this interesting and positive review of the Paris production which really whets my appetite. But let's get some background on the opera. Here is the Wikipedia article. The first problem is that Schoenberg only completed two of the three planned acts. Zoltán Kocsis completed the third act in 2010, but I don't know which version they will be using. Most performances are just of the two acts Schoenberg completed. Incidentally, he left it unfinished in 1932 and lived until 1951, so it was not death that intervened. The opera came out of Schoenberg's confrontation with his Jewish identity, forced on him by the growing levels of anti-Semitism in Germany in the 1920s. This had a heavy impact on him even though he had converted to Protestantism in 1898. Steve Reich has been connecting with his Jewish descent in a number of his recent works such as Tehillim.

Even without the third act the opera seems to have just about everything: burning bush, worship of the golden calf, sacrifice of four naked virgins, pillars of fire and cloud, betrayal and so on.

I read recently a book titled 1177 B.C.: The Year Civilisation Collapsed and noticed one very interesting thing. Of all the various peoples and cultures of the first millennium BC, about 3000 years ago, the Hittites, ancient Egyptians, the Sea Peoples, the Mycenaean Greeks, the Canaanites, the Cypriots, the Minoans, the Philistines, the Assyrians and the Israelites, of all these ancient cultures, one and only one has survived, prospered and flourished even unto the present day: the Israelites.

Let's have a listen. This is a 1984 performance conducted by Georg Solti with the Chicago Symphony and Chorus. If you go to YouTube, the whole cast are credited.

Posted by Bryan Townsend at 5:38 AM

Nice pics of the Teatro Real! You are whetting my appetite for a tour of European opera houses (and performances). Hopefully in the next decade I'll fix my career and cobble together the money for such an excursion.

Regarding the posthumous completion of Schoenberg's opera, his pupil Alban Berg was an equally unlikely opera composer, who also died before completing his last great opera, "Lulu." A few months ago I had the pleasure of viewing in cinema a live simulcast of the NY Met Opera's production of Lulu, which Schoenberg declined to complete, and which was finally "completed" in the late 1970s by Friedrich Cerha.

Thanks, Will. You have my best wishes and strong encouragement to attend some European opera performances!

Actually, I have always thought of Berg as being a very likely opera composer, even though he only finished one and part of another! The reason for this is his enormously successful opera Wozzeck, which became a model for 20th century opera composers (and not, interestingly, Stravinsky's Oedipus Rex).