"I wasn't born under a piano" 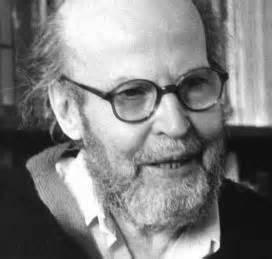 Can you guess the author of that quote? This was said by the composer Allan Pettersson, who, since his death in 1980, has been more and more recognized as perhaps the most important Swedish composer of the 20th century. Here is the Wikipedia article and here is the website of the Allan Pettersson Society, formed in 2002. June 20 will be the 34th anniversary of his death.

There is a box set of CDs available of all his symphonies issued by the German company CPO. I would hurry to place your order as Amazon says there is only one copy left! I wonder how many copies are sold a year, worldwide? Ten, twenty? In any case, I just received my copy yesterday and last night I listened to symphonies 2 through 5. The Symphony No. 1 is incomplete and the composer forbade performances during his lifetime. He completed symphonies 2 through 16.

I am certainly going to write more about the symphonies of Allan Pettersson, but I thought I would just share my first impressions. The only one I have heard previously is the Symphony No. 7, the one that first caught the public's attention after its premiere in October, 1968. I blogged about that here.

What stands out on first listening? Most importantly, these pieces make you want to listen and go back to listen again. They are certainly uncompromising music, but music that is not off-putting, but rather that draws you in. I am impressed by the freedom and originality. For example, the Symphony No. 2 begins quietly, with a repeated B in the low strings. Gradually a mordent figure is introduced, first on E, then on C. How do I know this? Well, I could certainly have figured it out, even though I don't have perfect pitch, but I didn't have to because, miracle of miracles, there are excellent liner notes in three languages that include not only a timeline of the life and works of Pettersson, but also, most exceptionally, musical examples!! Like this: 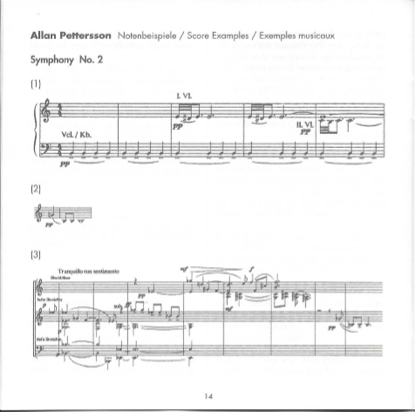 You don't see that much any more. Here is the first part of the Symphony No. 2 (it is not divided into conventional movements):

This is about a third of the symphony, which is some 45 minutes in length, one big movement in six sections. The liner note writer uses two metaphors to describe Pettersson's music: one is "stormy weather". I suppose this is akin to the description of some of Haydn's work as being "sturm und drang" ("storm and stress"). The reference is to somewhat agonized, passionate music. Another metaphor is "lyrical islands" that are passages of great tranquillity. One thing that makes the music so listenable is that he seems to strike the right balance between these two extremes: never too much stormy weather, nor too much lyrical island.

Another thing that struck me was the subtlety of his endings. As you might have noticed from my discussion of the Sibelius symphonies, endings fascinate me. How, in this post-tonal wilderness, do you end a piece? Pettersson has some interesting solutions including, a long diminuendo to nothingness, which is far rarer in symphonies than you would think.

That quote I used for my title? Here is the whole context:


"I wasn't born under a piano, I didn't spend my childhood with my father, the composer... no, I learnt how to work white-hot iron with the smith's hammer. My father was a smith who may have said no to God, but not to alcohol. My mother was a pious woman who sang and played with her four children."

Pettersson had a very hard life, first in the difficult circumstances in which he was born and second because of the precarious state of his health for the latter part of his life. He captured this in symphonies of strikingly powerful expression. Here is the first part of the Symphony No. 3 that begins with a bass drum roll and a jagged theme in the cellos:


UPDATE: I just ran across a more detailed biography on the website of the his publisher, Gehrmans Musikförlag.
Posted by Bryan Townsend at 9:40 AM

Well, I'm excited you're excited about Pettersson. I really love some of his works but let's accept it: this music is quite "heavy" or, as a friend told me: "not for every day".

And I'm not talking about something technical, actually, it's "emotionally" heavy.

My favorite works are symphonies 6, 7 and 8, which correspond to a very hard time in his life or something like that... they captivate and produce perfectly this "Pettersson mood" which is quite distinguishable (and it's not a party of optimism hahahaa). The Violin Concerto 2 is awesome too.

Looking forward to see what you think about him.

I've heard of Pettersson before and have probably heard some of his music but haven't paid much attention specifically to it yet, so it's interesting that you're covering him (which to me seems very unexpected considering he's not that known). Certainly looking forward to more posts about him and to listen to his music.

Anyways, I was on a vacation in Poland (or more specifically in Krakow) from the 4th to the 13th so I didn't have the chance to follow your posts recently. I will however try to catch up as I have a lot of time now.

Looks like all the cool kids already know about Allan Pettersson!! Thanks for your comments, Joel and Rickard. Yes, I'm about to listen to those big, middle-period symphonies, nos. 6, 7 and 8, that are so highly-regarded. Emotionally heavy indeed, but to my ears so far, fine music.

So, how was historic Krakow?

Lots of things to see. Many churches with nice art, many old buildings, interesting museums (below Sukiennice (Cloth Hall), Schinder's factory etc.) , Wieliczka (salt mine), Kazimierz (Jewish district) etc. I also went to a film music concert (horror film music) played by the Krakow Philharmonic in the Krakow Phillharmonic Concert Hall. The concert hall looks older than it is (it has neo-baroque elements according to Wikipedia), or at least older than the concert hall in Gothenburg (I think), but it actually got finished in 1931 so it got me fooled.

It's certainly worth visiting (there is a lot to see) if you get the opportunity and can stay for a couple of days (at least a week). But since I live in Sweden it's close and the travel is cheap (on the other hand I guess it's expensive to travel to Europe from America). It's also cheap to buy things compared with in Sweden so that's an added bonus. Plus I'm Polish and speak Polish so it's easier to get around for me.

Sounds like a fascinating place to visit. The furthest East I have been in Europe is Dresden, so I don't know Poland at all.