I take my title directly from Tom Service's article this week in his symphony guide. Yes, Anton Bruckner now joins Beethoven, Haydn and Sibelius with two examples in the guide. I just recently listened to all the Bruckner symphonies and was left a little less impressed than I had hoped for. But let's let Tom try and convince us. Here is the link. As always, Tom goes all out to sell us on the piece--his enthusiasm is one of the best things about the series. Here is how he describes the scherzo:


The sound this music makes is unlike any of Bruckner’s other scherzo movements; not just because of its slower tempo than most of the other comparable movements, but because of its atmosphere of feverish harmonic ambiguity and almost grotesque contrasts of texture: the unsettling trudge in the cellos and the basses that you feel wants to resolve but which never properly does (at least, not until the end of the main scherzo section); those scratchy staccatos in the violas and second violins; the glinting filament of the high unison line in the woodwind; and those searching arpeggios in the first violins, which seem to dream of a harmonic stability that the rest of the orchestral texture stubbornly refuses to satisfy – and all that in the first 10 bars! But this passage – and the rest of the mysterious progress of the rest of the scherzo - symbolises the distinctive soundworld of this symphony, especially its employment of so many simultaneous musical strata. It’s the diametric opposite of a musical monolith, but rather a multifaceted, multi-layered - multi-“sauced” – symphonic experience, whose kaleidoscopic orchestration is a crucial part of how its essential drama is communicated: richer, by far, than anything a supposed “organist of the orchestra” could come up with.

So let's have a listen:


Not bad at all, as Tom points out, a lot of fascinating orchestral colors and more rhythmic grace than in other of his movements.

But Tom does fall prey to an unfortunate intellectual failing of our time: the battle with straw men. Indeed, if you do much reading in politics these days you might wonder if there are any other kind of battles! But let's not get distracted. Tom begins his essay by selecting his army of straw men:


“He wrote the same symphony nine times.” "His one-dimensional orchestration is all thanks to his training as an organist.” They're "cathedrals of sound.” "They sound like Schenkerian middlegrounds” … and other such clichés. (Full marks if you got the last one, by the way, but I promise that’s what some musical analysts, especially those disciples of Heinrich Schenker, think of the symphonies. What it means in essence is that Bruckner’s symphonies move like great undigested wodges of harmony rather than being fully finished in proper compositional finery: it’s saying they’re great symphonic lumps, basically, calling to mind Brahms’s hoary old gag that Bruckner’s symphonies sound like “symphonic boa-constrictors”.

Yes, some have made the joke, a take-off on the old one about Vivaldi, that he wrote the same concerto 500 times, that Bruckner wrote the same symphony nine times. One of my commentators used it, but immediately qualified it to saying that the individual symphonies were not as distinctly differentiated as those of, say, Mahler. I can't turn it up at the moment, but I think that I have said somewhere that my impression is that, in his quest to match or better Beethoven's stunning achievement with his Symphony No. 9, Bruckner tended to overuse some of Beethoven's techniques, such as the shimmering string halo that begins the first movement, contrasted with a hammer-like theme. But that makes for a poor "straw man" as it is pretty easily demonstrated. The orchestration is another straw man: Bruckner did tend to favor certain kinds of colors, but it isn't necessarily because he was an organist. Berlioz is accused of improper use of harmonic inversions because he was a guitarist, but that doesn't hold much water either. The fact that, in Bruckner, we never seem to be too far from a passage with heavy brass barking at us, probably doesn't have too much to do with him being an organist. That remark about Schenkerian middlegrounds is a little more clever, but Tom turns it into a straw man too.

Oh, what is a "straw man argument"? Read the Wikipedia article, it is pretty good. The telling phrase is that "To be successful, a straw man argument requires that the audience be ignorant or uninformed of the original argument." So, if you are unaware of what the actual original criticisms were, then you might find Tom's argument quite convincing. But straw men arguments are so common nowadays we don't guard against them very well.

But go ahead and read all of Tom's pretty good introduction to the symphony and then give it a listen.

I want to do something rather more "MusicSalonish", meaning that I want to take a look at just a bit of the symphony and see what we turn up. I think it is called original research? Here is the finale to the Symphony No. 6 of Bruckner. 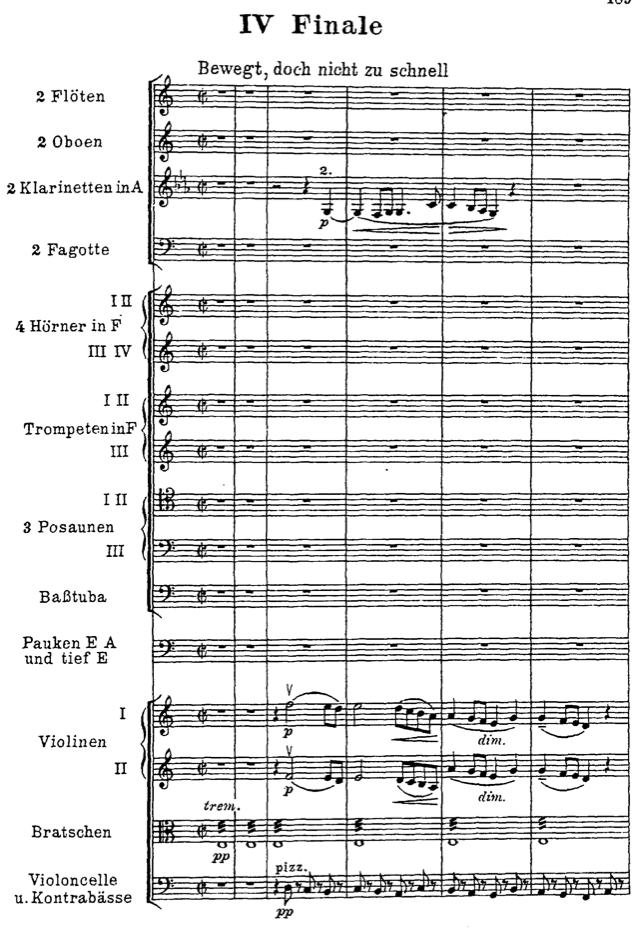 And from the next page: 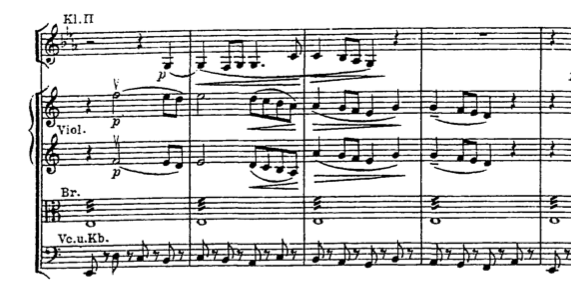 You will note that there are actually ten measures in my selection, plus the downbeat of measure eleven. This is because the movement begins with two measures of introduction with the E tremolando in the violas. The phrase proper begins in measure three and continues to the downbeat of measure eleven (at least the harmony does!). So what is going on here? The key of the symphony is given on the title page as A major, but the key here (and throughout the finale, right to the end) is A minor, no sharps or flats. The reason for this is, ever since Schubert, composers tended to regard both the major and minor modes with the same tonic, as all pertaining to the same tonality and equally accessible.

The violas hold a tremolando on the dominant (E) for the whole of this passage (a viola-playing friend of mine complains that she once had to sustain a similar tremolando for 350 measures in a Bruckner symphony). The cellos and basses have a descending sequence pizzicato going from ii to V and then repeating. Their harmony ends on V (E) on the first beat of measure eleven. There is a secondary melody in the clarinet that winds around E as well (remember, this is a transposing instrument in A), and touches briefly on the tonic. The main melody is found in the violins, doubling in octaves. Apart from some escape tones and brief scale passages, the tune is built around a 6-5 appoggiatura (from F to E). Then a 9-8 (from A to G over a G harmony), then it speeds up a bit in measure ten where there are parallel 7ths, resolving to a subdominant in first inversion, then, as I said, ending on the dominant.

The whole theme, if I might call it that, is essentially prolonged dominant harmony. Remember how I mentioned that Bruckner tended to be just a tad obsessed with how Beethoven began his Symphony No. 9? Well here, for comparison, is the beginning of that score:


Hmm, lessee, key is D minor and we have sustained tremolando A and E which outline which harmony? That's right, the dominant! I certainly don't want to make too much of this, but so many, many symphonists in the 19th century just cannot seem to get away from the Beethovenian kind of opening. It is just so much more portentous (cough pretentious cough) than the simple, crisp kind of theme that Haydn liked to use. But like, I say, I don't want to make too much of it. I just thought it would be fun to look at a little bit of a Bruckner moment. It takes just so much time to analyse a whole hour-long symphony!
Posted by Bryan Townsend at 9:40 AM